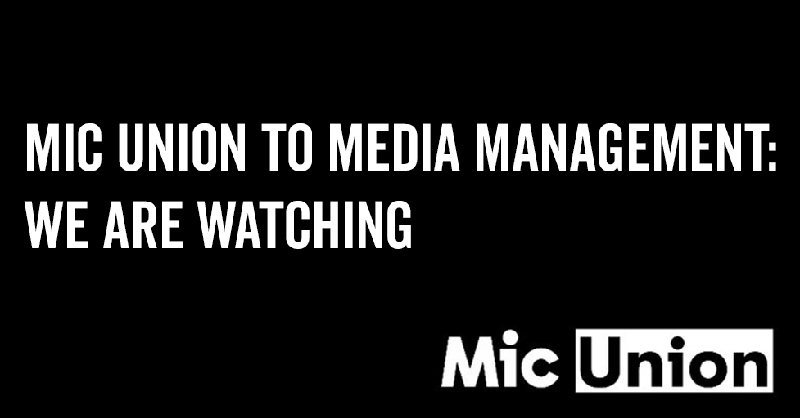 This is a reprint of an article published on the website of, on The NewsGuild of New York, Local 31003 of The NewsGuild-CWA on Jan. 18.

Jan. 22, 2019 – It’s been over a month since Mic and Bustle Digital Group (BDG) abruptly laid off more than 100 hardworking reporters, editors, filmmakers, graphic artists and support staff. Mic’s sudden shutdown confirmed our long-held suspicions that management had been repeatedly and consistently misleading employees, investors, and the public, when asked about the company’s financial state, the surety of deals with distributed media platforms, and other factors that culminated in the company’s closure.

Since Mic’s closure, it’s become apparent that Mic and Bustle management are in cahoots, repurposing and posting unfinished content produced by laid-off, unionized workers, often without their consent. This past Friday evening, five weeks after the closure of our newsroom, BDG began quietly posting “content” on Mic.com.

These practices MUST stop immediately. Bryan Goldberg and Bustle Media Group are on notice that our union has no intention of letting them off the hook for this gross injustice. We pledge to continue to monitor and respond as BDG attempts to relaunch Mic from its ashes.

Frankly, there is no more Mic newsroom. Each and every editorial employee, from top to bottom, was abruptly and unceremoniously dismissed, after hearing rumors of BDG’s acquisition of Mic in panic-inducing news reports the night before. We were given just a couple of hours to pack up our belongings, back up work that we feared losing and say goodbye to colleagues, all while in a state of shock and confusion. Later that afternoon, Bustle management was already at our 1WTC office, picking over the “assets” of our newsroom. All involved in creating this chaos should be ashamed — but none more than Mic CEO Chris Altchek and Bustle CEO Bryan Goldberg.

Inevitably, there will be more bombshell developments and shake-ups in digital media. But we can, and should, strive for better, more stable working environments. By 2020, there should be few, if any, digital newsrooms that haven’t seized on an opportunity to organize and create working conditions that encourage an open, thriving press and that promote the dignity of the people who do the work. We would like to thank all of our industry peers who reached out, invited us for coffees, bought us drinks and food, passed along job leads, scheduled interviews and offered freelance work to patch us over. As a unionized workforce, we were able to force the company to the bargaining table, to be transparent (finally!) about their finances and negotiate over the terms of our layoffs. Without our union, it’s unclear we would have been ensured anything at all. The Guild has been with us every step of the way, and we are grateful to be members.

In this new year, however, rather than harp on the disastrous failures of Mic and Bustle ownership, the Mic Union invites our peers to fight for better and force industry leadership to do better, period. Here’s how:

If you support these resolutions, share this statement with your colleagues, your unions, your journalism associations and your J-school programs. And share these resolutions on social media, with the hashtag #DignityInMedia.

The Mic Union
The NewsGuild of New York