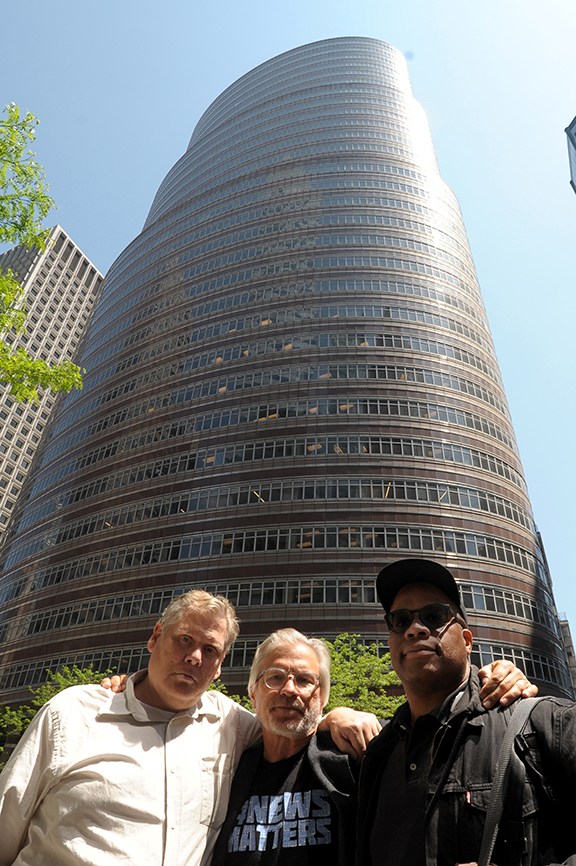 This is a reprint of an article that appeared on Jan. 17 on DFMworkers.org.

Jan. 17, 2019 – Picture this: Hundreds of U.S. newspapers – essential to our democracy – are controlled by one secretive New York hedge fund, with no obligation to disclose its small group of wealthy investors, hundreds of millions of dollars hidden in offshore tax havens, and a history of ethically questionable investments.

Three days after the news broke that Digital First Media, a newspaper company owned by Alden, is attempting a hostile takeover of Gannett newspapers, media experts still are speculating on what such a merger would mean for the industry.

Billing itself, without irony, as a savior of newspapers, Alden – a name now synonymous with corporate greed – made a $1.36 billion hostile takeover bid on January 14 to acquire Gannett, owner of USA Today and more than 100 local papers.

If successful, the move would make DFM the largest newspaper chain in the country, while extending Alden’s heavily criticized, slash-and-burn strategy to hundreds of communities across the United States.

Given Alden’s highly secretive business practices, one expert warns the merger could have dire consequences for communities and for democracy if DFM decides to make the publicly traded Gannett a private entity.

Some analysts speculate that Alden’s gambit was merely a bid to bump the share price, since it owns 7.5 percent of Gannett shares. Others believe a hostile takeover is imminent. If so, it’s consistent with Alden’s playbook.

Alden has conducted takeovers of the Fred’s Pharmacy chain and Payless ShoeSource. Both had their staffing gutted, business arms liquidated, board members replaced with Alden and DFM insiders, and headquarters staff moved from Memphis and Topeka to a Dallas office building owned by Alden founder Randall Smith.

The Gannett bid appears to be following a similar pattern.

Financial reporters had already been wondering aloud if Gannett might be ripe for a sale before DFM pounced, noting its declining share price.

Given Alden’s highly secretive business practices, one expert warns the merger could have dire consequences for communities and for democracy if DFM decides to make the publicly traded Gannett a private entity.

“Here’s what bothers me,” said Penelope Abernathy, the University of North Carolina’s Knight Chair in Journalism and Digital Media Economics. “If you’re a publicly traded company, there is some transparency. There is absolutely no transparency here (at DFM).

“You can look at Gannett’s financial statement. You may not agree with how they balance their obligation to communities with shareholder (concerns), but at least you can read about it.”

“With DFM, you only know the financial info because it was leaked. That really bothers me a lot,” Abernathy said, referring to a report on DFM’s 2017 financials by Harvard Nieman Lab’s Ken Doctor.

In a letter this week to Gannett’s board chairman John Jeffry Louis III, DFM’s chair Joe Fuchs was scathing in his analysis of Gannett’s business practices, writing:

“Frankly, the team leading Gannett has not demonstrated that it’s capable of effectively running this enterprise as a public company. Gannett shareholders cannot sit by and watch further value erode while the Board casts about for a strategy and a leader, especially when there is an opportunity to maximize value right now. We believe Gannett shareholders deserve better.”

The reference to not functioning well “as a public company” is one clue that Alden would prefer to take it private.

A spokesman for DFM told me that the company is highly critical of Gannett’s forays into digital tech investments — presumably a reference, in part, to a possible acquisition of digital publisher Gizmodo, which has its own convoluted history.

“Gannett suffered from a series of value-destroying decisions made by an unfocused leadership team – overpaying for a string of non-core aspirational digital deals and pursuing an ill-fated hostile for Tribune Publishing, all while Gannett’s core revenue, EBITDA, margins and Free Cash Flow continue to decline,” Fuchs wrote.

Newspaper companies have faced blistering criticism for their failure to navigate the transition from print to digital, so it’s hard to miss the irony of an attack on Gannett’s “digital deals” by a company that calls itself “Digital First.”

As to whether — and how — Gannett might resist a DFM takeover, Doctor reports that the company was in merger talks with Tribune Co. shortly before DFM struck and says that a roll-up of the two companies might still be a likely outcome.

As to DFM’s takeover threat, Gannett has only said that its board is looking at the offer.

“Gannett will first say to them, ‘show us you have the money,’” Doctor said.

Alden’s assets under management have dropped from more than $2 billion a few years ago to about $1.3 billion last year, and the financial backing for their offer remains an open question.

“Either you have the cash or you borrow the cash,” Doctor said. “Now is not the greatest time to be borrowing money.”

Alden, which is privately held, isn’t required to identify its investors or lenders, so citizens in local communities served by its newspapers don’t know who the firm is indebted to or what potential conflicts of interest exist in its news coverage.

An Alden takeover of Gannett would mean millions of Americans in hundreds more communities across the country would lose the ability to know who truly owns their local newspapers – a blow to the kind of transparency that’s essential to assessing the political leanings, financial entanglements, and biases of the newspaper owners.