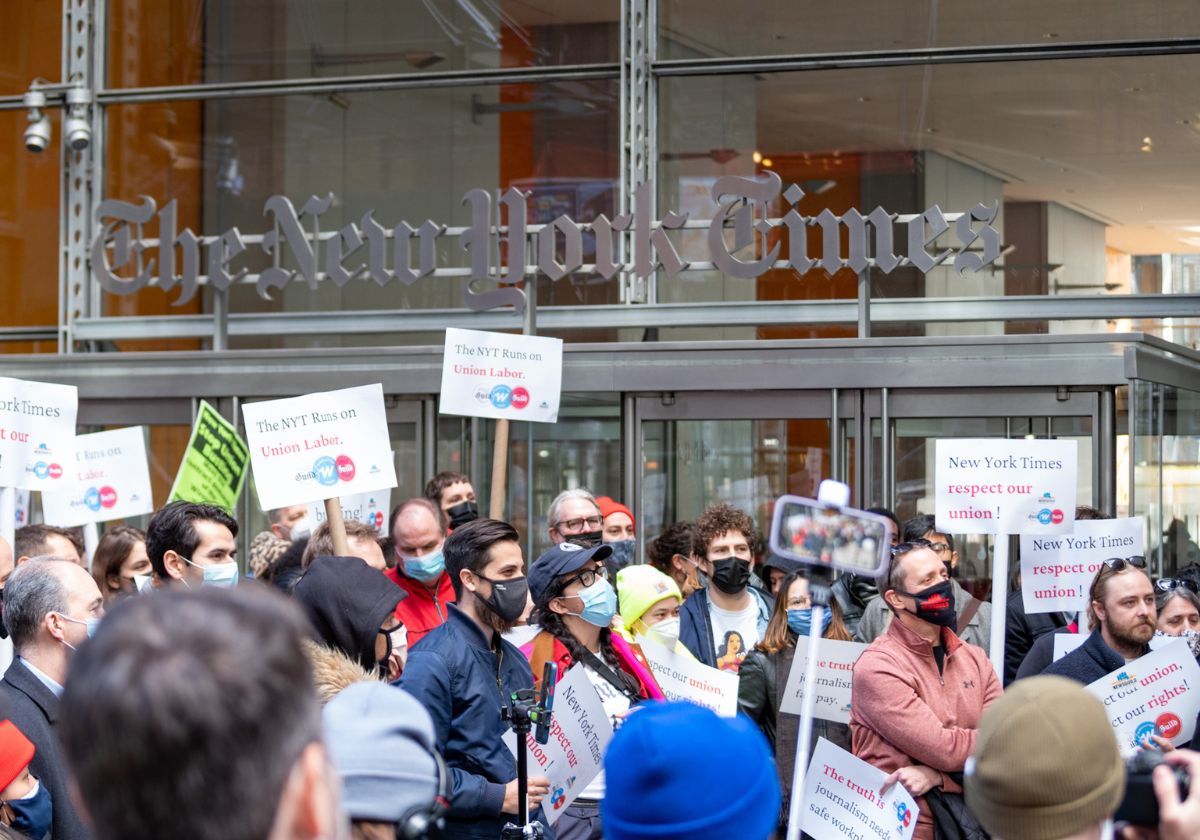 Members of the New York Times Guild, the Times Tech Guild and Wirecutter Union rallied to demand a fair contract in November 2021.

On Tuesday, the Times employees were joined by more than 200 members of the NBC Guild.

“We will continue to produce high-quality, award-winning work, while reminding the company it cannot unilaterally change our working conditions,” the Times workers tweeted.

“Though we are three separate units, we are united in our goal to make The New York Times the best place it can be for all of its workers.” The three Times’ units include newsroom employees, tech workers and the staff of Wirecutter, the company’s product-review publication. The NBC Guild covers NBC’s digital news staff.

“Any return-to-office policy, as a matter of workplace health and safety, should be a part of our negotiated contracts, alongside provisions for fair wages, equitable treatment for members and more,” the Times workers said.

Times staffers are fed up with the slow pace of contract talks. The journalists represented by the NY Times Guild have been working under a contract that expired in March 2021. The tech workers, who won union recognition in March after an aggressive anti-union campaign by management, have not yet negotiated a first contract. Wirecutter workers reached agreement on their first contract in December, following a five-day strike during Wirecutter’s peak Thanksgiving period.

In June more than 900 Times journalists signed a letter urging management to step up bargaining. Two weeks ago, more 300 employees sent personal emails describing their financial struggles. They haven’t had a raise in more than two years.

“The @nytimes is giving employees branded lunch boxes this week as a return-to-office perk,” union members tweeted on Monday. “Instead of free trinkets or dictates about where we have to work, we want respect and a fair contract, without delay.”

“Execs at @NBCNews want us back in the office today and are even offering the chance to win a Nespresso machine if we return. But they’re not offering a reasonable deal at the bargaining table, and they showed up to the last two sessions empty handed — so we’re staying out,” they tweeted.

Any mandated return must be bargained with our union, they said, blasting NBC for negotiating at a glacial pace. “In the 2+ years since we began bargaining, we’ve only managed to meet at the table about once a month. That’s not enough,” they said.

“We’re proud to have won a seat at the table, and we’re ready to get to a deal that includes a safe and flexible return. But a deal requires good faith participation on both sides, and we aren’t seeing it. If @NBCNews wants us all back, they gotta show up first,” they said.