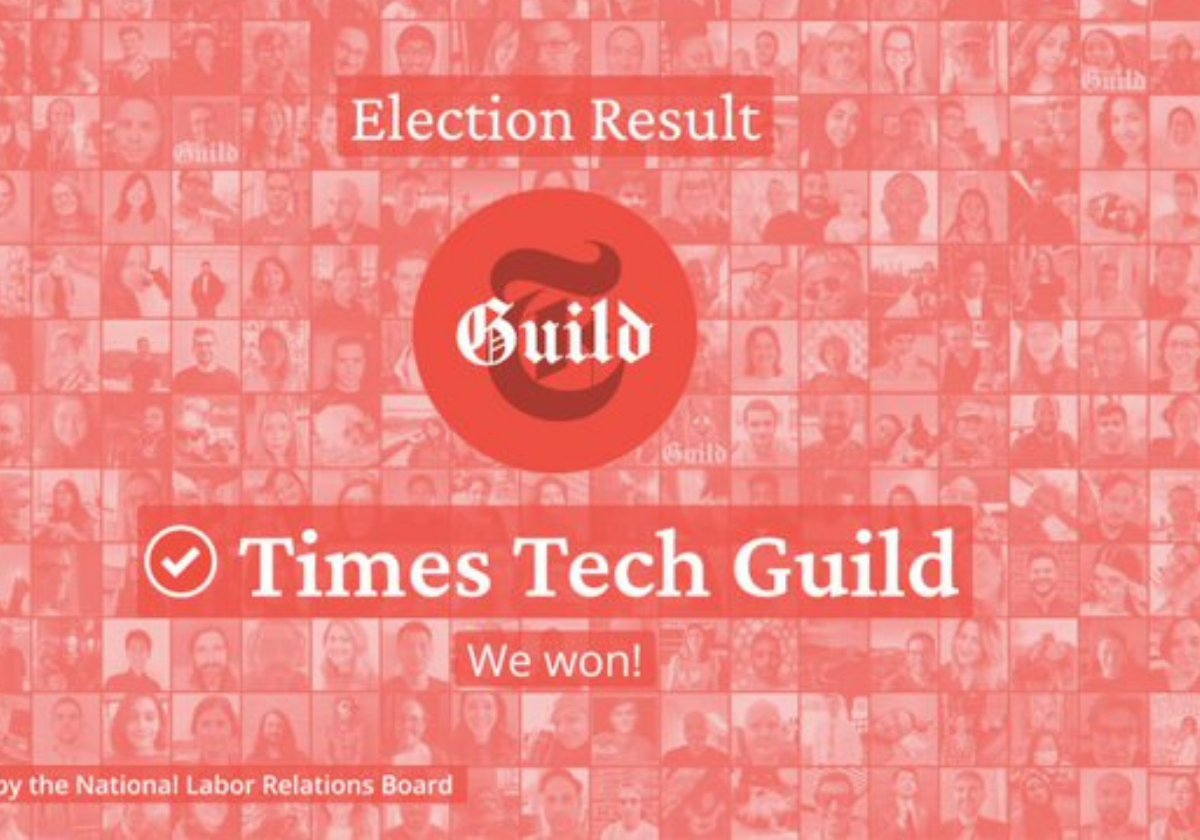 The National Labor Relations Board today announced that, in a 404-88 blowout vote, New York Times tech workers had won their election for a union, after a year-long campaign that was met with aggressive union-busting tactics from management. 85% of the unit voted in the election.

The 600-member Times Tech Guild will be the largest union of tech workers with bargaining rights in the country. The unit includes software engineers, data analysts, project managers, product managers, and designers. The unit is represented by The NewsGuild of New York, part of NewsGuild-CWA, and affiliated with CODE-CWA.

“The National Labor Relations Board has confirmed what we have known to be true: support for a union is strong among tech workers at the New York Times. With this election result, the hundreds of us who work on New York Times websites and apps  will finally have a real seat at the table and a meaningful say in our pay, benefits, and working conditions. We are proud to have won the largest union of tech workers with bargaining rights in the country, and we hope today’s victory will inspire other workers across the tech industry to join us.

“It is essential that tech workers have a voice in their workplace. We look forward to working with management to win a strong contract that will not just ensure equity and respect for tech workers, but will also set industry standards across the board.”

Tech workers at the Times first announced the formation of their union in April 2021, with an aim to address greater pay equity, a commitment to diversity and equity in the workplace, more affordable healthcare, just cause protections, remote work protections, professional development and career growth.

Times management fought workers every step of the way, first by refusing workers’ requests for voluntary recognition, followed by engaging in illegal tactics to forbid union members from showing support for their union. Times management then refused to let workers vote for their union through an expedited online election, even though 70% of members in the union signed a letter pledging to vote yes and calling for an expedited vote.

To protest the company’s efforts to hinder a fair election, tech workers at the Times led a half-day walkout last August. Then, in response to an Unfair Labor Practice charge filed by the NewsGuild, the NLRB found in December 2021 that the Times had broken the law by telling certain employees that they couldn’t show public support for the union. The Times refused to settle the charge, and the NLRB will now be prosecuting the Times for violating federal labor law at a hearing to begin this month.

In a last-ditch attempt to skew the results of the NLRB election, the Times even attempted to disenfranchise nearly 100 workers from the unit and to split the group into multiple unions. The NLRB decisively shot the Times down, ruling in January that workers could vote as one unit.

“For more than 80 years, workers at The New York Times have fought for a stronger and more united workplace. The 600 tech workers who voted overwhelmingly for a union today are carrying forward this work, setting huge precedents not only for the future of the Times but the future of tech organizing in the labor movement,” said Susan DeCarava, President, The NewsGuild of New York. “Today’s win is grounded in a history of raising the industry bar at the Times. We are proud to carry forward the fight to ensure workers have a voice in their workplace. Today that voice is a resounding Union Yes.”

“I’ve had the honor of witnessing the determination and tenacity of these workers firsthand, and had no doubt they would be victorious in their fight,” said NewsGuild-CWA President Jon Schleuss, a former journalist and programmer himself. “We are so thrilled to welcome them to our NewsGuild ranks, as they continue to build the tech that supports the incredible journalism of the New York Times.”

“In the face of a relentless union busting campaign by New York Times’ management, the members of the Times Tech Guild refused to back down. The message to the industry is clear: the power to choose union representation is in the hands of the workers, not CEOs,” said Tom Smith, Organizing Director at the Communications Workers of America. “They are part of a wave of tech and game workers at NPR, Alphabet and dozens of other companies who have organized with CODE-CWA to improve their workplaces.”

The Times Tech Guild will next proceed to the bargaining table to negotiate a contract, the largest in the tech industry.