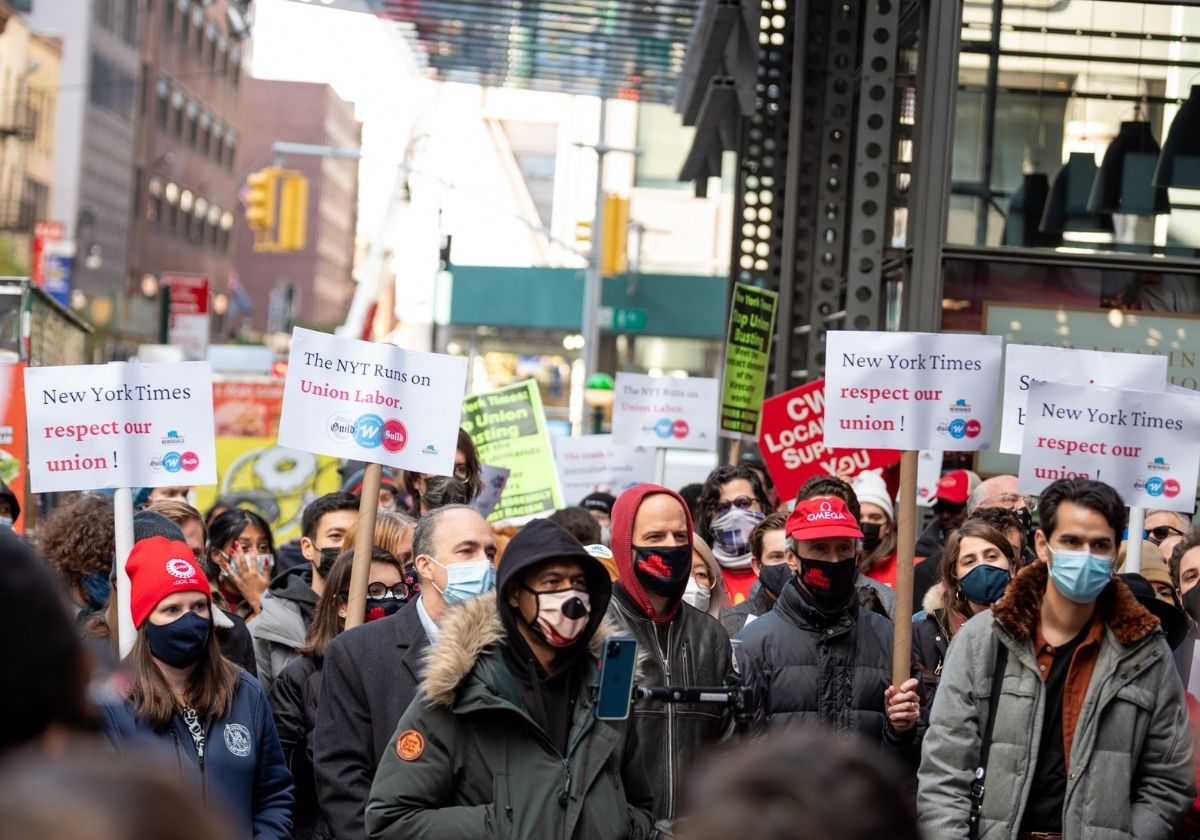 Workers at Wirecutter announced Tuesday that after two years of bargaining and a five-day strike, they have reached an agreement with the New York Times on a first contract.

Union members won immediate average wage increases of approximately $5,000, with the lowest paid members receiving a raise of more than 18%. They also won minimum increases of 2.5% per year for those in lower pay bands and 2% for those in higher bands.

Negotiations came to a head when staffers went on strike from Black Friday through Cyber Monday, the site’s most profitable period of the year. The unit represents workers at the popular product review site owned by the Times and is part of The NewsGuild of New York Local 31003.

“The huge gains we made in the past two weeks would not have been possible without our five-day strike with 100% participation and the thousands of supporters who honored our picket line and donated to our strike fund,” workers said in the announcement.

Nick Guy, a senior staff writer, said “For two years, we fought for wages and benefits that match the value we bring to Wirecutter and the New York Times, we fought for policies that are fair and equitable, and for improvements to our working conditions that allow us to find and retain the most talented journalists… I couldn’t be prouder to stand alongside my coworkers as we ratify this contract.”

The agreement also includes a ban on non-disclosure agreements that reference harassment and/or discrimination, a cap on health care cost increases, just cause protections, an appeals process for performance evaluations and enforceable contract language on the company’s commitments to diversity, equity, and inclusion.

Prior to the Black Friday strike, Times management had offered guaranteed annual raises of just 0.5%, leaving most raises up to managerial discretion, despite the fact that Wirecutter has added thousands of paid subscribers to the Times and continues to bring in record revenue.

“Our members at Wirecutter love what they do, and now they will be fairly paid for their work,” said Susan DeCarava, president of The NewsGuild of New York. “This contract is a testament to the collective power they’ve built and serves as an example of what can be accomplished when workers band together and demand their worth.”

The New York Times has come under fire for union-busting across the company. Just last week, it was revealed management illegally withheld holiday pay from Wirecutter workers in retaliation for striking (the union to file an Unfair Labor Practice charge with the NLRB). At the Times Guild, which represents journalists and other Times workers, the company has slow-walked bargaining and attempted to limit workers’ ability to observe their own union negotiations. Workers at the Times Tech Guild led a walkout in August to protest the company’s attempts to prevent hundreds of workers from voting on forming a union.

Despite management’s resistance, Wirecutter workers went on strike with 100% participation, raised more than $40,000 in strike funds, and won a transformative contract.

“The collective strength of our unit is incredible,” said Staff Writer Kaitlyn Wells. “Despite the roadblocks of the pandemic and the Time’s continuous union-busting tactics, we didn’t give an inch in the vision of making Wirecutter the best place to work.

“I hope this becomes a launchpad for other media shops and serves as a reminder that better working conditions aren’t an unreasonable ask.”