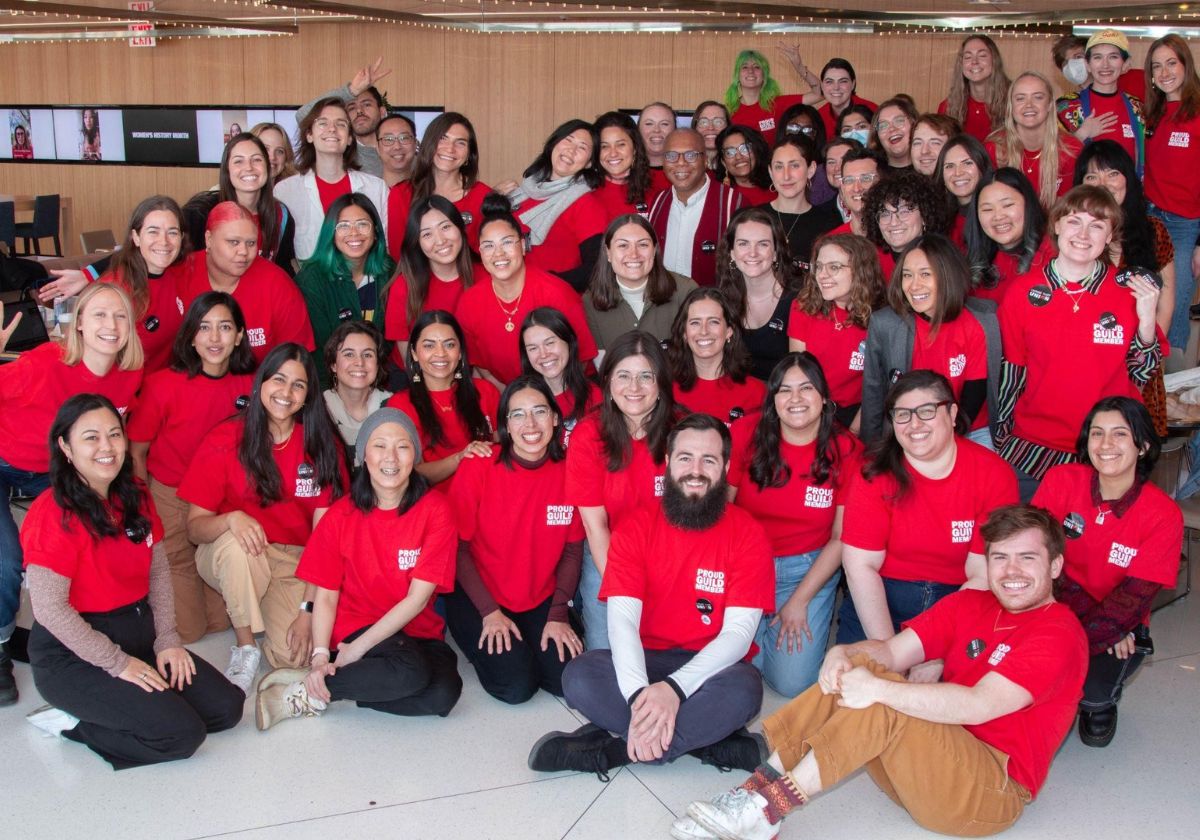 Key to their win is that they acted like a union from day one, organizing, mobilizing, winning support from workers, readers and supporters. They never backed down.

The union movement at Condé Nast is relatively new: The New Yorker Union was formed in June 2018. They were followed in March 2019 by employees at Pitchfork and Ars Technica, and in April 2020 by those at Wired.

In March, workers at the company’s remaining non-union publications and Condé Nast Entertainment, the in-house production studio, announced that they were unionizing. With a super-majority of support, they sought voluntary recognition from management. Negotiations culminated in a count of union authorization cards on Friday.

“We are ecstatic to have finally achieved this historic win, and proud to have fought to include myself and so many other long-term employees who have been unfairly divided between staff and ‘permalance’ work,” said Jess Lane, a Condé Nast Entertainment employee and Organizing Committee member. “My colleagues and I have shown through our organizing that we will not settle for these precarious working conditions. A lot of our problems exist across our industry and we hope that other companies and workplaces take notice.”

Congrats to the members of Condé Union and the New York Guild!

The journalists of the Everett Herald voted unanimously last week to form the Everett NewsGuild.

“Today the newsroom workers at @EverettHerald voted 19-0 to unionize. We will now have a true say in our working conditions,” they tweeted immediately after the vote count.

“We want to thank everyone in the community who supported us in this fight. We’re thrilled to join our union siblings in the @PacNWGuild in fighting to protect and preserve local journalism in the Pacific Northwest.

From the outset of the campaign, Everett Guild members cultivated support from the community, encouraging readers to respond to a management-sponsored reader survey with messages of support for the union. Several readers sent letters to the editor expressing support for the unionization effort, and the Snohomish County DSA (Democratic Socialists of America) launched a letter-writing campaign.

We had a lot to celebrate at Saturday’s Labor Day Parade in New York City. I joined Executive Vice President Marian Needham, several dozen Guild members and the leaders and staff of the NewsGuild of New York. We marched along CWA locals and the Association of Flight Attendants.

200+ members of the NBC Guild signed a letter to management last week demanding a better return-to-office policy and the immediate reinstatement of several of their remote colleagues who were terminated based solely on their geographic location.

They accused NBC of launching a pressure campaign – coercing workers to adhere to a plan they didn’t negotiate over, refusing to answer basic questions about the plan, and creating anxiety and confusion. They pointed out that management reposted the jobs of the fired workers but restricted the openings to residents of New York City.

Workers also reminded management that the company has an obligation to bargain with the union before policy changes can be implemented.

They have been fighting for fair return-to-office policy for 22 months, when they submitted a flexible work proposal in bargaining.

“Our members are organized — we’re ready to fight to protect our coworkers and win a RTO policy that actually makes sense,” they said.

It was not that long ago that NBC management was forced to reverse course after illegally refusing to bargain over reducing salaries of workers. Are they about to repeat the same costly mistake?

Members of The NewsGuild of New York protested Gannett CEO Mike Reed outside a tech conference in New York City on Friday. They blasted the leader of the nation’s biggest news chain for laying off more than 400 employees while spending exorbitant amounts on executive pay and stock buybacks.

The protesters passed out a flyer with the headline, “Gannett CEO Mike (G)Reed is killing jobs and killing newsrooms.”

Toward the end of the protest, Reed actually came outside and told workers he was committed to settling contracts by the end of the year and that workers can hold him to it.

“We intend to do just that,” said Adrian Szkolar, vice chair of the Atlantic DOT Guild. Their main demands include strong salary minimums, increased staffing, and a real commitment to improve diversity, equity and inclusion.

One large issue is that Reed is far removed from the anti-journalist lawyers he’s paying millions to fight workers and drag out negotiations.

Our hearts go out to the family, loved ones, colleagues and friends of Jeff German, an investigative reporter at the Las Vegas Review-Journal, who was fatally stabbed on Sept. 3.

German, 69, worked in Las Vegas for more than 30 years, first at the Las Vegas Sun and later at the Review-Journal, covering the courts, politics and organized crime. Last Wednesday, police arrested a suspect – County Public Administrator Robert Telles – who had been the subject of recent stories by German.

According to the Review-Journal, “German’s death came months after he reported that current and former employees alleged that Telles fueled a hostile work environment and carried on a relationship that impaired the office’s ability to deal with the public. The complaints led to co-workers secretly videotaping the two in the back seat of Lee-Kennett’s car in a parking garage. The story also included claims of bullying and favoritism by Telles.”

Shining a light on corruption and crime is an essential part of a reporter’s job. But journalists should never face violence, threats or intimidation for doing their work.

While the staff at the Review-Journal isn’t part of the Guild, they are part of our family and we stand with them during this dark time.

“The agreement we had has been blown up.” That’s what Sen. Amy Klobuchar (D-MN) said before she pulled the Journalism Competition and Preservation Act – which she cosponsored with Sen. John Kennedy (R-LA) – from consideration by the Judiciary Committee last week. The bill’s future is unclear. It’s tentatively scheduled to be discussed again at a committee meeting Thursday morning.

Sen. Klobuchar’s comments came after an amendment offered by Sen. Ted Cruz (R-TX) was approved by a vote of 11-10 (with one Democratic senator absent due to COVID). Sen. Cruz’s amendment ostensibly would have blocked “censorship collusion,” but Sen. Klobuchar said it would be exploited to undermine the goals of the legislation. It seems that both sides want some language covering this issue, but are still working out the details.

The JCPA would exempt local news publishers from antitrust regulations and permit them to bargain collectively with Google and Facebook over fees for use of their content. I’ve been arguing that the bill should focus on journalism and journalism jobs since I testified to Congress in March 2021.

Prior to the mark-up, more than a dozen local Guild leaders called on the Committee to improve the bill by ensuring that publishers spend money they get from the bill on journalism.

“We have no confidence that these massively consolidated publishers will use whatever revenues they collect from JCPA to invest in journalists rather than more mergers, stock buybacks, overpaid executives and union-busting lawyers – because that’s how these companies spend the revenues that they already extract from our members’ journalism,” they wrote.

“We welcome policy debate that pursues a sustainable environment for the local journalism that our democracy requires,” the letter says. “But you must apply basic scrutiny to our employers while you seek to hold Big Tech accountable.”

Sen. Alex Padilla, a democrat from California, cited the letter in remarks demanding that the legislation be sure to help workers and not just the hedge funds and private equity groups controlling the industry.

I’ve been actively working with Sen. Klobuchar’s staff for months to improve the bill and we won several improvements. However, the bill has to make jobs a priority if we have any chance of fixing the problem created by many companies (both the platforms and current news execs).

Here’s an important win: An Oregon judge dismissed all charges against a public radio reporter who was arrested in 2020 while covering the police removal of homeless campers from a public park.

Judge William Haberlach of the Medford County Municipal Court dismissed misdemeanor charges for trespassing and resisting arrest against April Fonseca Ehrlich, a reporter for Oregon Public Broadcasting, just before her trial was set to begin.

We joined the Reporters Committee for Freedom of the Press and dozens of news organizations and press freedom groups in urging the city of Medford to drop the charges.

Ehrlich was arrested after she refused to follow police instructions to move to a media staging area “where it was not possible to adequately see or hear interactions between police officers and campers, or gather audio.”

“I was humiliated and traumatized that day, and for the last two years, the City of Medford has forced me to relive those events by prosecuting me,” Ehrlich said in a press release after the charges were dropped. “My arrest and prosecution were an attack on our Constitution’s First Amendment and our democratic freedom of the press.”

Staffers at Warehouse Workers for Justice say they’re exhausted, overworked and underpaid. Their union has shrunk from 15 to 5, due to workers quitting or being let go. All of this is happening at a labor justice organization.

Members of Warehouse Workers for Justice Union sent management a letter asking for extra pay for extra work, a cost-of-living increase to help them keep up with recent inflation, a PTO policy comparable to what management gets, and a commitment to getting their field schedule a week in advance.

Management’s response? Instead of meaningfully engaging with union members, they encouraged workers to attend “Staff Appreciation Day” to golf with leadership of the workers’ rights organization.

WWJ Union members say, “Only material improvement in working conditions will constitute real appreciation.” You can support them by signing their petition.

Our next Executive Council meeting will be tomorrow at 7p ET. NewsGuild members can attend and observe. Register here at least one hour before the meeting begins.

We’ve got many great training sessions for Guild activists scheduled through September. Upcoming events are listed on our calendar, with new events added frequently. A new steward training series is set to start Sept. 28, with starting times our west coasters will appreciate.