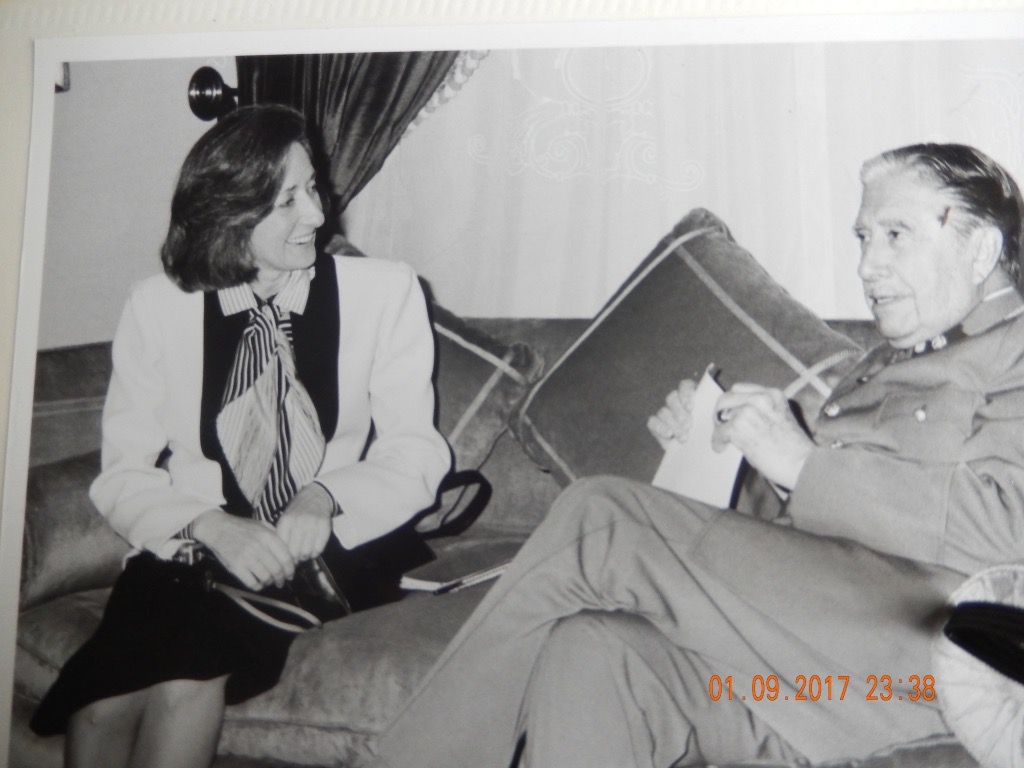 This article by NewsGuild International Chairperson Martha Waggoner was first published on June 27, 2019, by Poynter.

July 3, 2019 – It happened more than 50 years ago, but Peggy Simpson remembers the details clearly.

After the excitement of the early days of the trial of Jack Ruby, covered by male reporters, she had handled the daily grind. She would work the overnight shift at the Dallas bureau of The Associated Press, go home to shower and head to the courtroom. But on the day the case of the man accused of killing President Kennedy’s assassin went to the jury, she arrived to find another reporter in her seat – a man.

“They had to pull me off the ceiling,” Simpson recalled in a recent interview. “I could not believe it. Bob (Johnson, The AP’s Dallas bureau chief) walked me around the block. He said, ‘This happens, get over it.’”

It was, she said, simply the culture at The AP. Few women worked there, she recalled. No Hispanics. And a minuscule number of blacks.

A few years later, Simpson was one of seven women to file a discrimination complaint with the Equal Employment Opportunity Commission, with the help of the Wire Service Guild, now the News Media Guild. The women then sued The AP after the EEOC found that it had reason to believe the company was violating the 1964 Civil Rights Act.

It was one of several lawsuits filed at the time against media organizations, including The New York Times and Newsweek. Readers of national publications as well as hometown papers that featured AP’s articles were getting virtually all their news from one group: white men.

That lawsuit ended in 1983 with a $2 million settlement that provided for back pay, training, promotion goals and bonuses for AP’s female and black journalists.

The seven women shared $83,120, not a large amount, even then. But it was never about the money, said Rachelle Cohen, assistant editorial page editor of the Boston Globe.

“It was the goals and timetables that we fought tooth and nail for,” Cohen said. “That was a really critical part of what we were about. But timetables only last so long.”

In addition to Simpson, who lives in Washington, D.C., and Cohen, the other women who sued are: Virginia Tyson of Los Angeles, the only black plaintiff; Virginia Sherlock of Stuart, Florida; Maureen Connolly of Portland, Maine; Shirley Christian of Overland Park, Kansas; and Frances Lewine, who died in 2008.

The NewsGuild-CWA interviewed the women as part of its ongoing equal pay project, which includes analyses of pay at publications including the Philadelphia Inquirer and the Washington Post.

The analyses consistently found disparities in pay between white men compared to women and people of color.  The Guild is determined to fight them.

Like Simpson, Connolly recalls the time a male colleague replaced her on a big story. Nelson Rockefeller had been named vice president after Spiro Agnew resigned.  She was sent to his home near Bar Harbor “only for a guy to come in and take the story,” she said.

Several of the women knew Sherlock, but for the most part, they hadn’t met each other.

Tyson, who worked in the Dallas bureau after Simpson had left, said she joined the lawsuit partially because of Simpson’s

reputation. “In Dallas, her name was all through the files. She was there for the JFK assassination. I had read all about her. I had never met her at that point, but in my mind, she was a hero to me.”

Christian had been part of an earlier lawsuit that receded. Her willingness to stick with the fight made the second lawsuit possible.

Several have stories about an emphasis on women’s appearance: You couldn’t be a bureau chief if you were attractive because you had to makes sales calls to newspaper editors, whose wives might get jealous. Simpson recalls thinking: “Holy shit. I never thought I had to compete against the wives.”

On the other hand, women were judged if they weren’t attractive enough. Christian recalls being told that AP might recommend her for an assignment in Cuba. She later found a note in her file from a male boss: “If we send her, they can’t accuse us of offering a candidate on her looks.”

When they sued, the average annual salary for male reporters was about $20,000 compared to about $16,000 for women. “It’s just shocking now that I look at it, but back then it was the norm,” said Sherlock, who went on to become an attorney.

In her 1988 book “A Place in the News: From the Women’s Pages to the Front Page,” Kay Mills writes that The AP had no female bureau chiefs in 1973. By 1977, there was one. When the lawsuit was filed, women made up 7 percent of AP’s staff, Mills’ book says. By 1983, when the lawsuit was settled, the number was 22 percent and two years later, 25 percent.

The AP also employs 575 Caucasians (81.1 percent); 36 blacks (5.08 percent) and 32 Asians (4.51 percent). Other employees include a Pacific Islander; one who identifies as two races; and four whose races aren’t available.

“Ideally, AP’s newsrooms would have the same make-up as the communities they cover,” said Jessica Bruce, AP’s senior vice president for communications and human resources. “AP’s staff diversity does not meet that goal now, but I know News is committed.  While we aren’t hiring as many people into the AP as we were a decade ago, last year, 40 percent of the outside hires into News were people of color.  It’s progress. ”

Bruce didn’t share the makeup of management-level employees. The company “also works to make sure there are leadership and advancement opportunities for the women and people of color here at the AP,” Bruce wrote in an email.

Tyson said she was the only black employee in Dallas and Omaha, the first two bureaus where she worked. In Los Angeles, her colleagues included another black woman and an Asian American woman.

“At any given time at least one of us was on the night shift and/or the overnight shift,” she said. “As a joke, we referred to ourselves as the Interchangeable Parts. When we had an opportunity to write shift log notes, we would include a mention of which of us was on the shift: I.P. 1, 2 or 3.”

While she was in the Los Angeles bureau, “there were a slew of hires of young women because we worked harder and were brought on at lower salaries,” she said. ‘The AP would disregard their experience and bring them on at the lowest possible pay grade. And when a new guy was hired, it was hailed almost like the second coming of Christ.”

Most of the plaintiffs had left The AP by the time the settlement was reached. Cohen had jumped to the Boston Herald after “any number of unpleasant conversations” after the lawsuit was filed.

The bureau chief called her into his office and asked “How could you do this? We were always there for you,” she said.

Still she loved working at The AP. “It saddens me to think of the things I didn’t get to do,” she said.

Tyson was a copy editor at the Los Angeles Times when the settlement was reached. She learned about it after a story moved on the wire “then a copy ended up on my desk,” she said. “Boom, there was a little spotlight on me. I don’t know what impact it had on my career. But like I said I never got off the copy desk.”

Connolly left The AP after another man was hired as her boss even though she had more experience covering the statehouse in Maine. “It was another nail in the coffin,” she said. “I was seeing that my future didn’t look too bright.”

She had inquired about going into sales only to be asked if she planned to have a family. The boss told her that she wouldn’t want to travel if she got married.

And when Simpson’s bureau chief learned that she was part of the lawsuit, “He said I was a stupid bitch and hung up on me,” she said. Years later, they had a few awkward lunches.

Christian thought the conversation went well when she advised AP’s director of Human Resources that she was leaving for the Miami Herald. “You picked a good company to go with,” she was told.

She later learned that he immediately called someone at the Herald to inform him that she was part of the lawsuit. It didn’t affect her job although she was told the executive editor ran through the newsroom asking people if they knew she had sued The AP.

In 1981, Christian won a Pulitzer Prize for her stories at the Herald about the wars in Central America – challenging the wisdom of AP’s decision against sending her to Cuba.

None of them would have been able to fight The AP without the help of the Guild, said Sherlock, who’s now an attorney. “The Guild provided not only financial support, but also emotional support,” she said. “I can say without hesitation that the Guild was absolutely critical.”

The women don’t regret their participation in the lawsuit, but they do worry that their gains have eroded.

“I’d love to say that everything’s fine now,” Sherlock said. “But it’s not. Women and minorities are still not at the same pay level. I can say with some measure of satisfaction that huge steps have been taken. … But c’mon, what is it, 40 years? We can do better.”

Women and minorities can’t assume that managers will stick with gains made in the past, Cohen said.

“It saddens me to think that sometimes you have to fight the fight all over again,” Cohen said. “We can’t take things for granted. And sometimes that happens.”