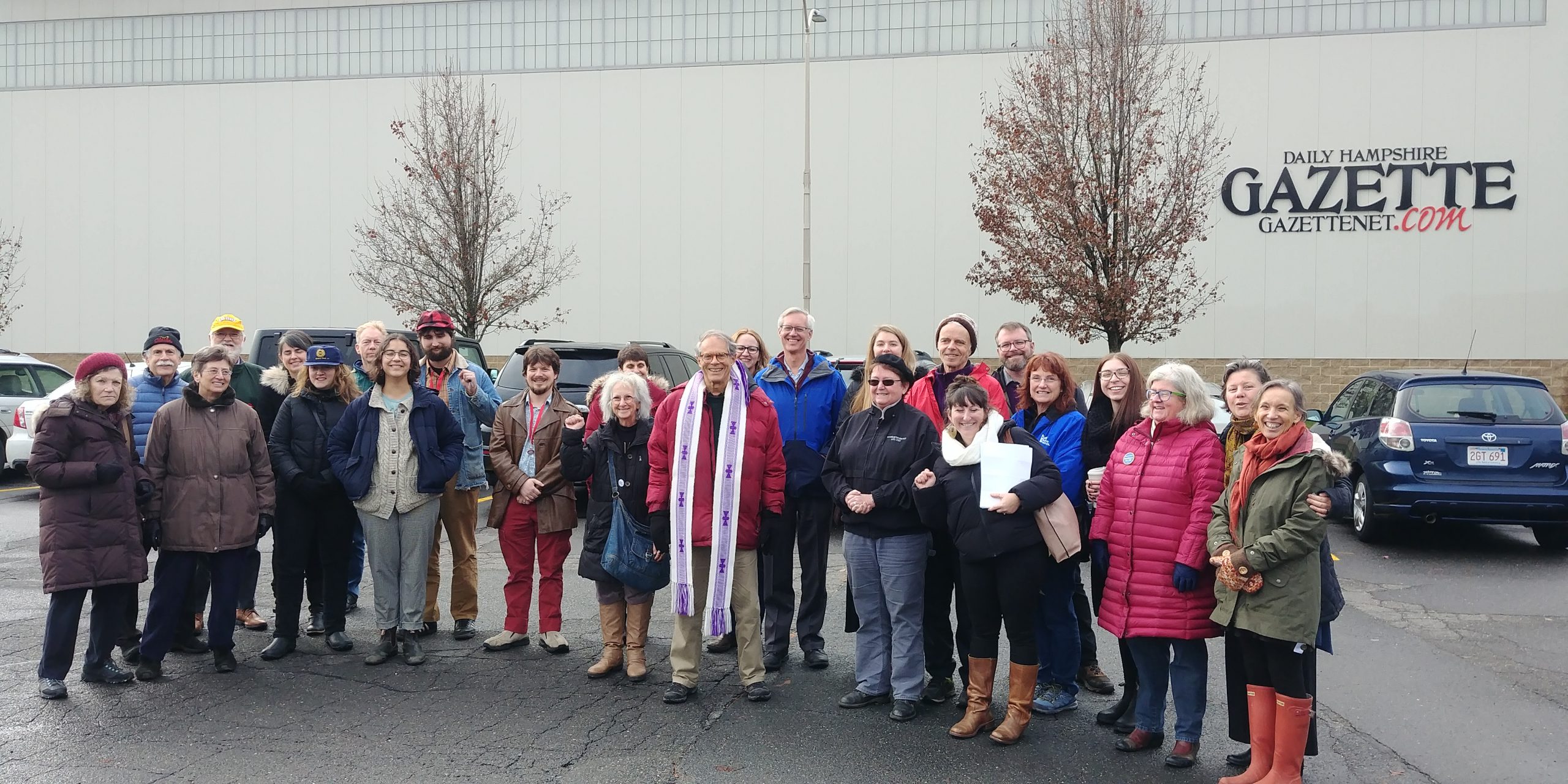 Nov. 27, 2018 – A delegation of community leaders visited the offices of the Daily Hampshire Gazette on Nov. 27 to show support for the workers’ efforts at the Gazette and the Valley Advocate to win union recognition.

The delegation brought a petition that had been signed by 200 community activists urging Aaron Julien, CEO of Newspapers of New England, to recognize the Pioneer Valley NewsGuild, which is an affiliate of The NewsGuild-CWA.

“When they walked in, PVNG members rose from their work, came to the door, and applauded,” union organizers said. “After a second, they began applauding back, and the groups stood grinning at each other in gratitude and admiration.

“Whatever the opposite of loneliness is, that’s what we have right now,” organizers said in a Facebook post.

“We depend on the staff at both the Gazette and the Advocate to work every day to bring us the news that we need to ensure that critical local, regional, state and national issues see the light of day,” Comerford said in a statement. “The staff of both papers deserve to have the support they need to do that job most effectively. With all this in mind, I urge Newspapers of New England, the parent company, to voluntarily recognize the union.”

Workers at the Gazette and Advocate submitted a petition to Julien on Nov. 12 signed by 70 percent of eligible workers, asking him to voluntarily recognize the union. If he refuses, an election will be held under the auspices of the National Labor Relations Board on Dec. 12.

“It is inspiring to see that so many neighbors, community leaders and subscribers to the paper agree that Newspapers of New England respect the work we do and know that we can best serve our readers if we have a voice in our workplace,” said Dan Rochon, a multimedia sales representative at the Gazette.

“We believe strongly in workers’ democratic right to organize a union,” said Bookbinder, an organizer with the Pioneer Valley Workers Center and Jobs with Justice. “We know it can be scary for workers to take collective action and we commend them for their bravery in gathering 70 percent of their colleagues to publicly sign a petition to recognize their union. We hope that Aaron Julien will honor their request.”

“The decision by employees of the Daily Hampshire Gazette and Valley Advocate to form a union is part of an inspiring national trend,” said NewsGuild-CWA President Bernie Lunzer. “Employees of more than a dozen news organizations – from the Los Angeles Times to the Casper (Wy) Star-Tribune – have organized with the Guild so far this year. Journalists are taking a stand across the country,” Lunzer said, “and succeeding in the fight for the future of powerful community journalism.”

Journalists of the Capital Gazette, the Carroll County Times and the Baltimore Sun Media Group – all based in Maryland – also demanded union recognition from their employers in November.

Photo: The delegation of community leaders gathered outside the office of the Daily Hampshire Gazette before presenting a petition in support of workers’ efforts to form a union.