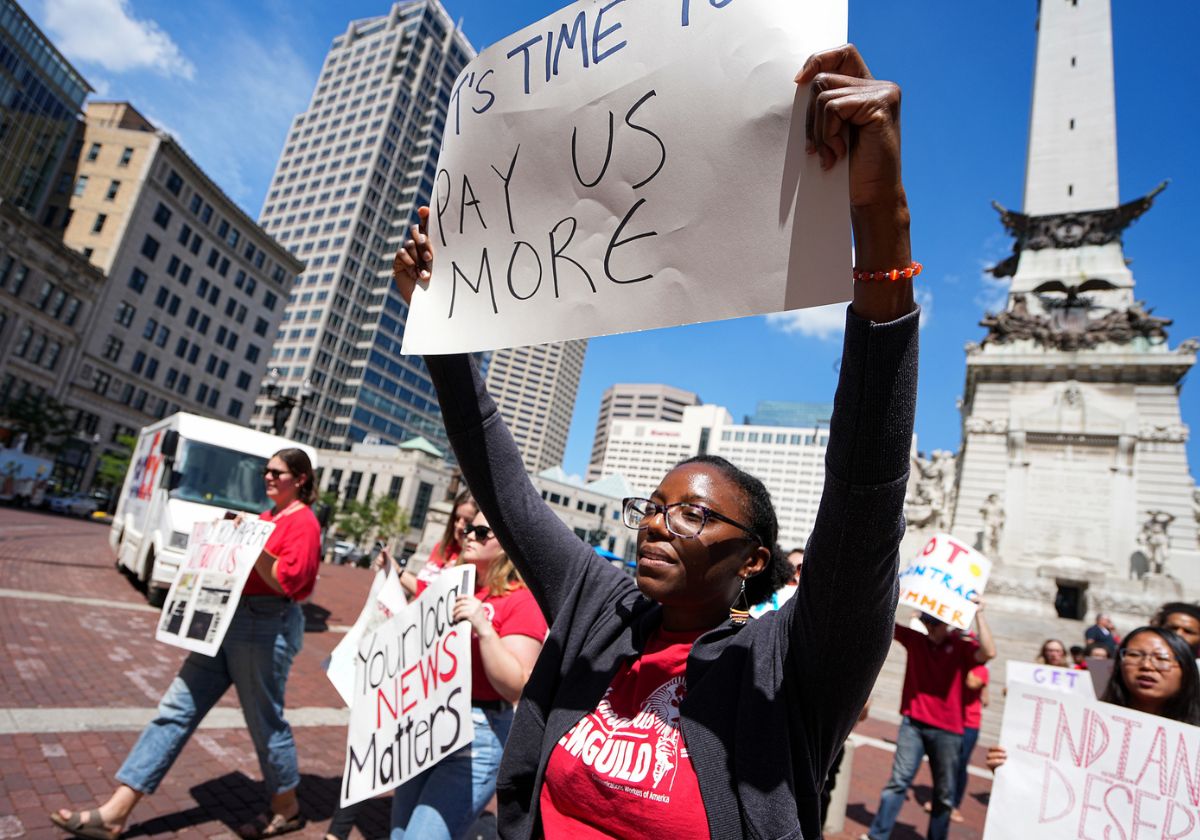 More than 30 red-T-shirt-clad IndyStar journalists and a dozen allies took a coordinated lunch break to demand a fair contract on Sept. 1, exactly two years after the expiration date of their collective bargaining agreement.

We’re giving away either a jacket or a hoodie this week to a random member. All you have to do is don a union button (should be Guild or CWA related!), take a photo of yourself in union drip, post the photo on Twitter and tag @newsguild. By next week we’ll pick a winner at random to get either a jacket or a hoodie. Let’s just make this week Labor Week!

Speaking of drip, more than 30 red-T-shirt-clad IndyStar journalists and a dozen allies took a coordinated lunch break to demand a fair contract on Sept. 1, exactly two years after the expiration date of their collective bargaining agreement.

Members of The Indianapolis NewsGuild and their supporters marched around Monument Circle in downtown Indianapolis, chanting, “Chop from the top, not the newsroom.”

The protest took place one day after Gannett executives finally revealed that more than 400 employees were laid off last month. An additional 400 open positions were cut, including some at IndyStar. Management had avoided disclosing the numbers for weeks.

Union members are fighting for a contract that rectifies pay inequity in the newsroom, brings decade-old pay scales up to date, and provides cost-of-living adjustments at a time of record high inflation. They’re also demanding staffing that reflects the diversity of the city they report on.

“This contract foolishness has gone on so long that it’s forcing us to ramp up our visibility. There will be more to come,” said Robert Scheer, a photojournalist who has been at IndyStar for 24 years. “It’s funny that when a stock price goes up, employees generally don’t benefit but when it goes down, we’re always the ones who suffer – not top leadership.”

Mike Reed, Gannett’s CEO, raked in $7.74 million in salary, bonuses, and stock options, according to Gannett’s annual SEC filing. Meanwhile, the minimum salary in The Indianapolis News Guild’s current pay scale is $32,000 – tens of thousands of dollars below the median income in Indiana.

“While we’re fighting to improve our own work lives, this is bigger than us,” said Jenna Watson, president of the local and a photojournalist at the IndyStar since 2016. “We believe our contract proposals would help make The Indianapolis Star the best newspaper it can be, which is what our city deserves.”

Congrats to Atlantic’s business and technology teams, who won union recognition last week, after a count of union cards confirmed supermajority support. The workers announced their intent to unionize as part of The NewsGuild of New York Local 31003 in July, joining their editorial colleagues at The Atlantic, who unionized in June 2021.

Workers are calling for more equity and diversity in the workplace, fair compensation, and meaningful professional development and growth opportunities for employees, particularly junior staff.

They’re also calling for a bigger say in the company’s digital growth and revenue strategy. Workers want to help shape efforts to grow the digital future of the magazine and the advertisers they work with.

“Our union will ensure that those doing the work to produce The Atlantic will be part of informing its bright future,” said Product Designer Han Castanedo. “I am looking forward to helping create the inclusive and equitable workplace that lives up to the mission we all care deeply about.”

Journalists at Louisville’s Courier Journal announced last week that they’re unionizing. The Guild’s newest Gannett unit will include approximately 35 newsroom employees, from reporters who are just beginning their careers to veterans. They’ll be part of the Indianapolis NewsGuild Local 34070.

Every new union at a Gannett publication strengthens our fight for good journalism jobs and for strong journalism that fully serves our communities. Gannett, the nation’s biggest news chain, has been fighting us every step of the way, with unacceptably low pay and chronic understaffing.

Courier Journal NewsGuild members said that Gannett must be held accountable for “the staff bleed” during the pandemic and chronically low wages. Thirty-four journalists have left over the last two years, leaving fewer eyes on community issues that readers care about.

Food reporter Dahlia Ghabour said, “No one who works full-time at this paper, or any paper, should have to work a second job to make ends meet. All of us work incredibly hard and it’s beyond time we demand equitable pay and benefits that support quality of life for our staff.”

Guild members are calling on their colleagues, readers, and community members to support the Courier Journal Guild and ensure that Gannett doesn’t water down their city’s journalism.

Support their campaign by signing their petition that urges management to grant recognition. They got 1,000 signatures on the first day!

Members of the NBC Guild are pushing back against management stonewalling on their attempts to negotiate a fair return-to-office policy.

In November 2020, workers submitted a flexible work proposal in bargaining that outlined criteria for becoming a permanent remote employee and established ways for the rest of the workforce to temporarily work from home as needed.

“We finally heard back from @NBCNews this month… kinda,” they tweeted last week.

NBC News requested a bargaining session on the RTO policy, but their lawyers showed up unprepared and refused to answer basic questions about the plan. “We’ve been asked to reinterpret a company-wide email from our CEO as if it were a contract proposal,” workers said.

They highlighted one exchange from the bargaining session: Has the office been evaluated by health and safety experts? Yes, but we don’t know when. Can we see the recommendations made by those experts? No, they weren’t written down. Nobody wrote down the safety recommendations? [Silence.]

Meanwhile, management has quietly been terminating contracts for remote employees.

Last Wednesday, Guild members collectively worked remotely to remind NBC News that they unionized to build the best, safest, most equitable workplace they can — and that means real safety precautions and real flexibility options. They’re demanding the company reinstate their terminated coworkers negotiate a return-to-office plan that works for the workers.

Workers across the Gannett chain have been doing a bang-up job of organizing together to leverage their collective power. In mid-August, hundreds participated in a lunch-out to protest impending layoffs in the wake of poor financial reports. Less than a week later, they organized to demand answers at a management-sponsored Town Hall. It wasn’t much of a Town Hall, as workers weren’t able to ask questions.

Management took so much heat, they scheduled another company-wide Q&A last week, billed as “Ask Us Anything.” Naturally, Guild members did just that, using the slogan, #AnswerUsMike. “Mike” being Mike Reed, Gannett’s CEO who carted away 160 times the median salary of a Gannett employee.

CWA Canada joined with dozens of other media organizations to send an open letter to Prime Minister Justin Trudeau last week condemning the “increasing and alarming online hate and harassment targeting journalists and journalism as a profession.”

“This is a global problem, which threatens not only the safety and well-being of journalists, but the proper functioning of democracy itself. Many countries are now working on plans to fight back. We are calling on Canadian police and policymakers to do the same,” the groups wrote.

“For the most part, these attacks are aimed at racialized and female journalists who are experiencing an increasing number of targeted, vile threats of violence. The trend is clear. In a 2021 Ipsos survey of journalists, 72 per cent of respondents said they had experienced some form of online harassment.”

To help police and reduce the burden on complainants, media organizations be given a formal role in filing complaints on behalf of or with journalists who have become targets of hate and harassment.

Another big story spreading around North America is the firing of CTV news anchor Lisa LaFlamme. LaFlamme was let go earlier this summer and the company cited “massive changes to traditional broadcasting” but another narrative took hold publicly: that the company fired her because she was outspoken and let her hair go gray. Unfortunately, LaFlamme was not represented in a union and didn’t benefit from the kinds of job protections you get from unionizing. Her dismissal is a call for us to make sure we all are building unions in our workplaces. Any of us is expendable to the latest boy-boss with bad ideas who walks through the door. Unless we collectively fight back!

More than 1,000 members of the National Union of Journalists in UK and Ireland launched the first of four days’ strike last week. They work for Reach, which owns national publications, including The Mirror and The Express and many regional titles. It is one of the UK’s biggest media companies.

They’re demanding fair pair. Last December, the NUJ made a formal proposal for a pay increase of 8.5% but the company has offered just 3%.  The NUJ held a strike authorization vote among its 1,069 members, with 79% voting in favor of strike action and 88% for action short of a strike.

NUJ says Reach has the means to settle the dispute, noting that last year it posted profits of GBP 146 million and has no debt. It paid its CEO a GBP 4m pay package, equal to the pay of 107 median-earning employees.

Please make a contribution to their hardship fund, if you’re able.

Labor Day photos from around the Guild