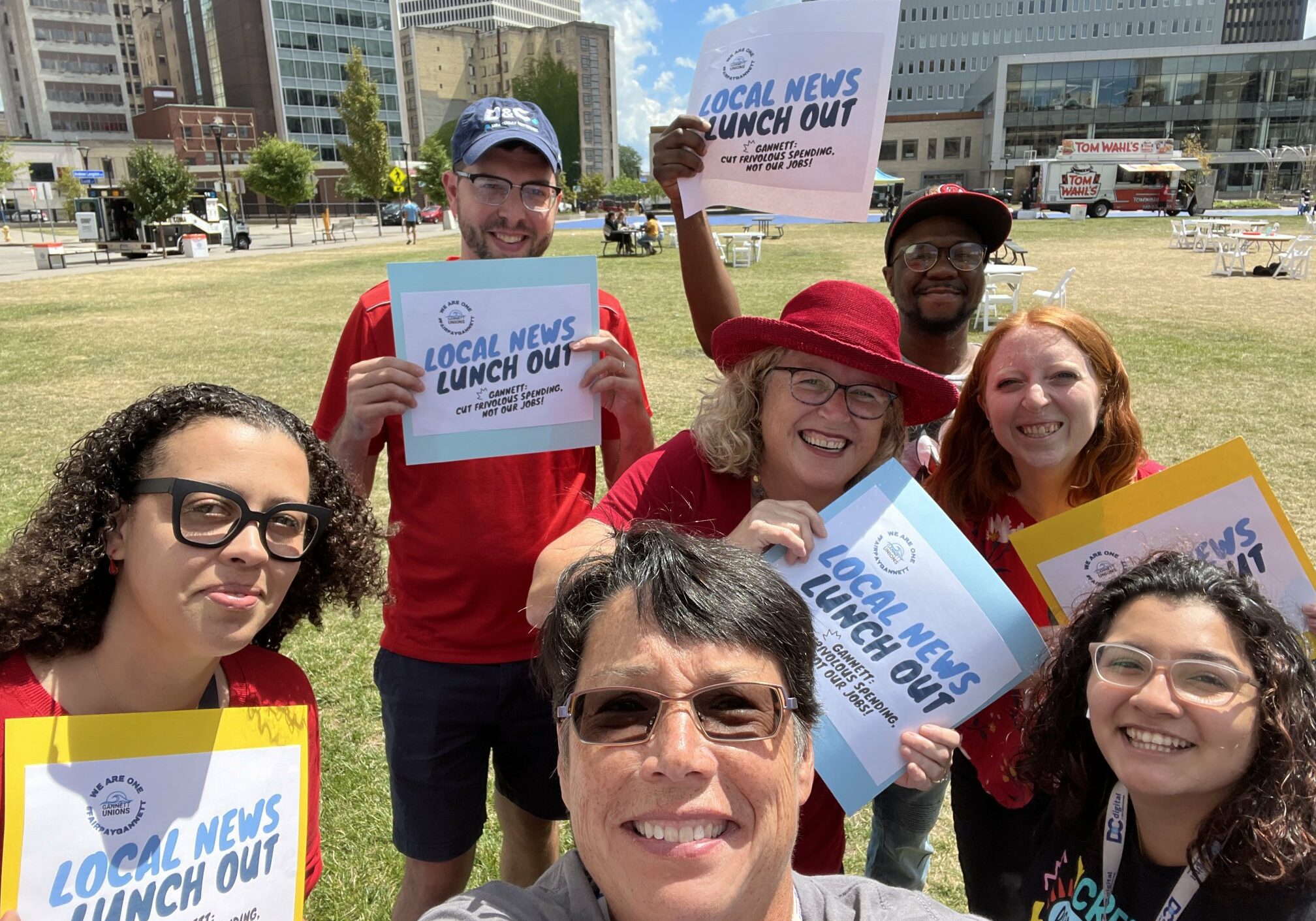 Gannett journalists in Rochester protest frivolous spending by executives and walk out on August 11, 2022

Hundreds of workers employed by Gannett-owned newsrooms are taking a coordinated lunch break today in response to a string of emails from upper management last week that threatened layoffs due to the company’s second quarter financials. According to Mike Reed, Chairman and CEO, Gannett must “responsibly and proactively [align] resources to our highest strategic priorities and [lower] costs to be in line with revenues.”

Unionized Gannett journalists across the country say the financial austerity at Gannett is a result of financial mismanagement on the part of the company and cannot be solved by further staffing cuts:

“Gannett wants to pretend it can report on our communities with fewer journalists while still spending lavishly on executives. We deserve better, and our readers, equally, deserve better,” said Susanne Cervenka, Project Reporter, Asbury Park Press. “The effects of Gannett’s continued austerity decisions affect all workers at the company, so we need to fight back together to win. That’s why we are standing with hundreds of Gannett journalists across the country to demand the company reinvest in our journalism. We’ve said it before and will say it again: There is no local journalism without local journalists.”

The NewsGuild-CWA represents more than  50 Gannett-owned newsrooms across the country. Over half of those newsrooms are participating in today’s “lunch out.” Hundreds of workers will gather on Zoom to discuss next steps to fight back against the company. Many of these newsrooms organized in the past couple of years, as huge media conglomerates like Gannett have bought up newspapers, gutted their staff, and closed some for good. In the last 15 years, more than 1,800 local newspapers have closed their doors for good.

“The Utica News Guild joined a coordinated effort with other NewsGuild shops in the past year because we know the power in numbers and of collective action. We’re now preparing to present the last of our proposals, ones that address wage disparities, staffing shortages and lack of diversity in huge ways that we’re proud of,” said reporter Rose Schneider. “Despite the same proposals being agreed upon at other Gannett-owned newsrooms in our region, management has not even countered ours. Vacancies continue to go unfilled, important departments like Sports continue to lack coverage, and now the company is threatening further layoffs. This is about the community our newspaper serves, and the loss to the community such cuts would bring.”

“Gannett for years has attempted to cut its way to success. As word of pending cuts spread online, readers reacted with worry about the loss of more journalists in our community. My colleagues company-wide have chosen to stand together. And I am here for it,” said Richard Ruelas a reporter at the Arizona Republic.

Not only did 100s of union-represented @Gannett employees take part in the #LocalNewsLunchOut today, we hit reply all to emails to company leadership and flooded their inboxes with union love!!!

Here’s a shot of *just the people w/ cams on* from the room where we met for lunch pic.twitter.com/Cm6BRTxAoV

“Gannett continues to show that it puts investors and executives before journalists,” said NewsGuild-CWA President Jon Schleuss. “In contrast, local journalists are organizing all across the country because of their deep commitment to their work, their communities and their newsrooms. Well-staffed and fully functional newsrooms are a critical component of democracy, especially in an election year. Gannett — or any company — cannot do layoffs at newly unionized newsrooms without proving economic exigency, which can’t exist when executives and shareholders are pocketing millions.”

“Many of the over 200 Gannett journalists, photographers, and employees that have organized with our local region have dedicated decades to their work, producing award-winning reporting while surviving endless rounds of layoffs, and subsidizing their employer by going without wage increases,” said Susan DeCarava, president of The NewsGuild of New York. “Our members believe in the work they do and the importance of journalism to our democracy. We are all ready to fight for better terms and conditions in Gannett newsrooms and are committed to producing the news our communities need and deserve.”

Among the newsrooms participating in today’s lunch out are AZCentral and The Arizona Republic (AZ), The Bergen Record (NJ), IndyStar (IN), The Palm Beach Post (FL), Milwaukee Journal Sentinel (WI), Poughkeepsie Journal (NY), and the Austin American-Statesman (TX). The demands at the bargaining table across all shops remain focused on three main pillars: fair pay and stronger salary minimums, increased staffing, and a real commitment to diversity, equity, and inclusion.

“Gannett journalists and readers alike know these layoffs are detrimental to news coverage across the country, and we’re not going to stand for it anymore,” said Katie Hall, a reporter at the Austin American-Statesman. “It’s time for this fight to be a collective, national one.”

Join workers at Gannett by sharing a message and using #LocalNewsLunchOut