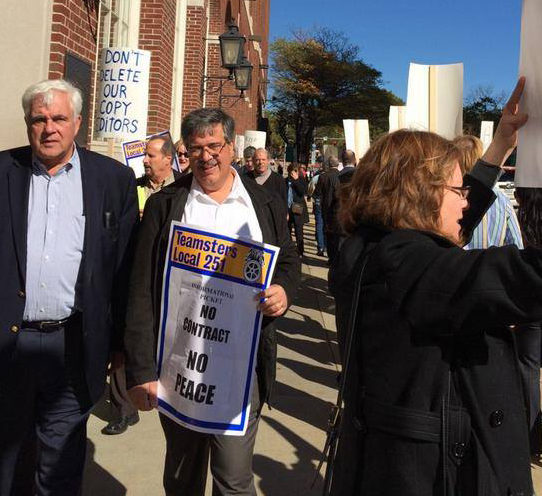 Providence Journal employees have been fighting for a contract for three years.

Updated Dec. 21, 2017 to reflect that 2018 benefits and premiums will remain at current levels, whether employees’ premiums are currently based on 2017 levels or 2016 levels.

Dec. 14, 2017 – In a first-of-its-kind agreement, The NewsGuild-CWA reached a “global settlement” with GateHouse Media on Dec. 12 that improves wages and protects health benefits at 16 GateHouse-owned newspapers.

“By negotiating a single agreement for 16 newspapers, we have significantly enhanced workers’ power now and for the future,” said Bernie Lunzer, NewsGuild president. “Rather than negotiating separately in small groups, our members are facing a common adversary together. This agreement provides a great platform for future negotiations.

“Although the 1 percent and 1.75 percent pay increases are modest, they are the first contractual raises most of the employees will get in as many as 10 or 11 years,” Lunzer said. When bargaining began, GateHouse declared it would offer no wage increases.

The union also won a guarantee that health insurance coverage would remain at current levels without increasing employees’ costs in 2018. GateHouse had been planning to increase employees’ share of premium costs or force them to move to a plan with fewer benefits. In either case, employees’ health care costs would have increased significantly.

“The health insurance freeze is a major accomplishment,” said negotiating committee member John Hill, who is vice president from NewsGuild Region 1 and president of the Providence (RI) Local. “It’s a result of having all the Guild-represented GateHouse papers involved.

“In Providence, we’ve been in bargaining for three years and gotten nowhere,” he said. “This agreement helped us leverage the power we have as opposed to each local working on its own.”

Rick Eggleston, the Guild’s unit chair at the Worcester Telegram & Gazette, said retaining the current level of health benefits at the same cost will save him more than $2,000 per year, because his premiums would have increased from $253.67 every two weeks to $338.87.

“On top of that, we got a raise,” he said. “The raise isn’t great, but it’s something. We haven’t gotten a raise in over a decade at the Telegram Gazette.”

“I am hopeful that, as we move on to Stage 2 bargaining to try to wrap up our contracts, there will be a positive outcome that will bode well for our future bargaining relationship,” said negotiating committee member Rollie Dreussi, who is executive secretary of the Northeast Ohio Local.

Off-the-record negotiations between the Guild and GateHouse began in late September and continued periodically through Dec. 12, when the agreement was signed.

Seven locals represent employees at the 16 papers. Each local will establish its own ratification timeline, with voting expected to be completed before the end of the year. Units that do not ratify the economic agreement will return to bargaining with GateHouse at the point where the parties left off in fall of 2017 and will not receive the negotiated wage increases, health care protections or participate in Stage 2 bargaining.