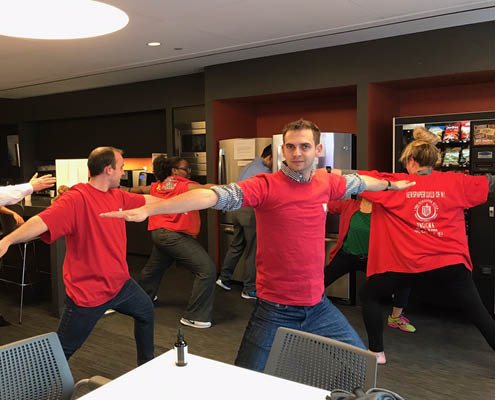 Dec. 15, 2017 – NewsGuild members at Thomson Reuters voted overwhelmingly to ratify a new contract on Dec. 14, with 241 casting ballots in favor of the agreement and 9 voting against.

The new agreement, which runs through December 2020, comes after three years of intense negotiations with management. During that time, Guild members worked without a contract, though the terms of the previous agreement remained in effect. Negotiations began in July 2014.

Under the terms of the new contract, Guild member will receive an increase of 2.25% effective Jan. 1, 2018, and a 2% increase in each additional year of the contract. That’s quite an improvement over management’s initial offer: zero. Workers also will be eligible for merit-based pay increases.

Employees of Thomson Reuters are members of the NewsGuild of New York.

Throughout the negotiations, union leaders mobilized members to demand a fair contract. In May, scores of members marched across their newsrooms to plaster their manager’s offices with red Post-it Notes conveying their unhappiness with management’s disrespectful approach to bargaining.

Later, Guild members hand-delivered a letter with nearly 300 signatures to Steven Adler, Reuters’ editor-in-chief, urging him to step in and ensure that his staff secures a contract that recognizes their contributions to Reuters’ reputation and bottom line.

Members changed their social media images to keep the pressure on management and to publicly proclaim that they deserve acknowledgement and the respect of a fair contract.

They also took weekly “wellness breaks” and yoga breaks to demonstrate to management the detrimental effects of its disrespectful bargaining stance.

They also will be compensated with extra pay for hours that extend beyond the normal work week, including when they are on standby, as well as for overnight and weekend shifts.

“This has been an exhaustive three years for our members,” said NewsGuild of New York President Grant Glickson. “Our members have fought very hard, and participated in countless actions, for a contract that they deserved three years ago. Let this agreement be an example of what happens when media professionals come together to fight for a necessary contract.”