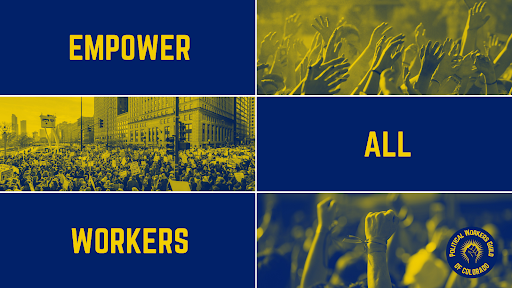 Colorado’s legislative aides, campaign workers and organizers are determined to change the rules – and not just those that affect the constituents they serve.

The staffers announced Tuesday that they are forming a union, the Political Workers Guild of Colorado, to advocate for better pay and benefits for themselves and for all Coloradoans. They will become part of the Denver Local 37074 of The NewsGuild-CWA.

Capitol aides earn just $15 per hour, receive minimal benefits, often work upwards of 18 hours per day, and the terms of their compensation and employment are determined through a legislative process they cannot participate in without risking termination.

High turnover “hurts our legislators, it hurts their constituents, and it robs us of institutional knowledge that is already hard to maintain in the Capitol,” said Logan Davis, a PWG organizer and former House Majority Project Deputy Director. “We have to do better.”

To advocate for its members, PWG will seek to build power to achieve members’ goals and work collectively to address grievances and bring dignity to their jobs. Forming this nontraditional, “open” union does not require passing legislation or an Executive Order from the governor, as would be required to form a collective bargaining unit.

The staffers say they recognize that their proximity to power enables them to effectively fight for programs that all Colorado workers deserve. “Instead of securing short-term gains for our members, we believe that advocating for universal programs will lead to lasting change for all Coloradans,” they said in a statement.