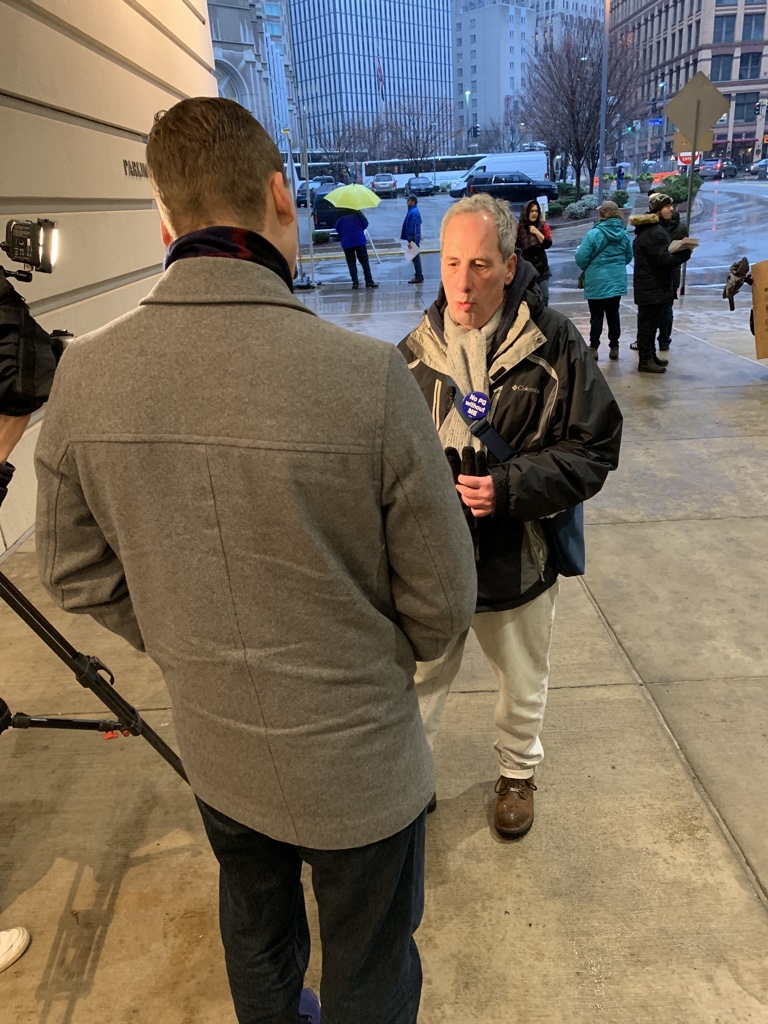 Dec. 16, 2019 – The Newspaper Guild of Pittsburgh will end a byline strike on Dec. 18, one month after it began the job action to protest “economic injustice and a hostile workplace.”

But the end of the strike is not the end of the union’s battle against the “oppression of 14 years without a raise, slashed health care, bad-faith bargaining and a hostile newsroom,” Michael A. Fuoco, the local president, wrote in a tweet. “Only when they cease will we cease,” he said.

“One month was the right time to end it because our message of mistreatment at the Post-Gazette is now known locally and throughout the country,” Fuoco said.

The byline strike enjoyed 100 percent support from staff of the 140-member newsroom, with participation from writers, photographers, columnists and artists. Guild members whose work isn’t credited with bylines, such as page designers, editors, librarians and clerks, joined the protest by wearing buttons with slogans of support, the union said.

Jon Schleuss, the Guild’s newly elected international president, said the total participation “shows just how dedicated the workers of the Post-Gazette are to its long-term success.

“It’s time for the Blocks to come to the table and work with the Guild to forge a path forward,” he said.

The byline protest is the latest in a series of actions by The NewsGuild’s Pittsburgh Local and caps a tumultuous year at the paper, during which dozens of loyal, longtime journalists and editors have been fired, forced out or driven away. Most have not been replaced.

Throughout the year – and as recently as Dec. 14 – union members passed out flyers at public events exposing the oppressive working conditions and asking readers to email messages to the company’s owners and executive editor.

In February, the company made the controversial decision to name Keith Burris executive editor. He had become infamous while editorial director at PG’s sister paper, The [Toledo] Blade, for writing a 2018 editorial that defended President Donald Trump after he called African nations “s–thole” countries. The editorial was published in the Post-Gazette on Martin Luther King Day, prompting the local to take the unusual step of condemning the editorial.

Also in February, Publisher John Block launched a tirade in the newsroom so severe that staffers were concerned about their safety.

The union says the Pulitzer-Prize winning staff is fighting for the “life and the soul” of the iconic, 233-year-old newspaper.