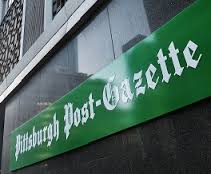 Last month, while sitting in on a local bargaining session, I asked management’s chief negotiator what the publisher’s plans were for the Pittsburgh Post-Gazette. The employer’s rep was stumped. He had no idea.

But he knew he had to extract millions of dollars from the employees.

And so it goes across much of the industry. An April 3 report by the Bureau of Labor Statistics found that over the five-year period ending in September 2016, the workforce at newspapers declined by 26 percent. At some publications — like those owned by Digital First Media, which is run by a hedge fund — workforce reductions were more than twice that.

They act as if they are powerless to do anything else, shrug their shoulders, and blame their decisions on the Internet.

But is the end of print the natural outcome of the Internet revolution — as management asserts — or are news organizations suffering from a lack of imagination?

Block Communications, Inc., which owns the Pittsburgh Post-Gazette and the Toledo Blade, also owns broadcast television stations and cable television systems. Last year it earned a profit of $150 million — with most of the surplus coming from its TV and cable operations, which were built with revenue from the publications.

When those operations were in development, no one said, “We can’t use that money because it was generated by the newspapers.”

But now they insist that the Post-Gazette and the Blade must live or die of their own accord. And this is true across the board. Employers refuse to use funds from their corporations’ other companies to support a forward-looking business plan for their papers.

Instead, they use the common belief that newspapers have no future as an excuse to pillage and plunder.

Digital First Media, the company known for its aggressive acquisition of newspapers, doesn’t particularly care about developing them. Their goal is to deliver 20 percent in the next quarter.

So, what is the future of newspapers?

We in The NewsGuild-CWA know this: We want and need strong news operations, regardless of the platform. Our nation’s democracy depends on journalism, and our communities need strong, locally-based news organizations.

Journalists want to produce quality content and we want readers to consider us a trusted source. And we are more than willing to work with publishers and other stakeholders to explore new approaches and develop new business models that work. These could include employee stock ownership, non-profit owners, support from foundations and partnering local publications with national news organizations. In many cases, extending the life of newspapers could ultimately lead to stronger digital-only operations.

In the meantime, owners that don’t care about the future of their publications should find someone who does and get out of the way.

Our members should join with others in their communities to reconnect local news organizations with the communities we serve.

Too many Guild members have gone way too long without a raise. We are losing patience with that approach. Journalism is a noble profession and journalists deserve to be paid.

We believe that there is a future for news organizations. But we must get past the people who seek to manipulate common misconceptions to run down the publications they own.