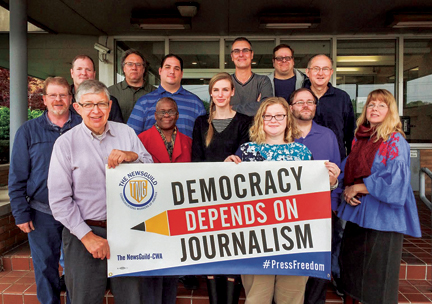 July 12, 2017 – The battle for fair contracts at GateHouse Media newspapers has intensified in recent months. Workers at the 16 Guild-represented publications engaged in joint actions, developed a coordinated campaign to take on GateHouse and its parent company, and scored a stunning victory at a meeting of shareholders.

Many members at GateHouse newspapers have gone without a raise for 10 years while absorbing staggering increases in their health insurance premiums. NewsGuild-CWA-represented newspapers at many GateHouse properties have suffered massive staff reductions that have reduced news-gathering operations to a fraction of their former size. These include the Providence Journal, Worcester Telegram, Sarasota Herald-Tribune, Lakeland Ledger, Peoria Journal Star, State Journal-Register, Rockford Register Star, Canton Repository, and Erie Times-News.

“The reporters, editors and other workers at these publications are determined to serve our communities and provide good, quality journalism while we fight for good pay and benefits,” said NewsGuild President Bernie Lunzer. “The entire union supports this effort.”

The recent pushback began on May 3, when GateHouse employees joined with NewsGuild-CWA members at newspapers owned by Digital First Media to celebrate World Press Freedom Day and publicize our common fight against the asset-stripping management philosophies that govern both chains.

Employees displayed banners and desk tent signs at their desks, with a message for each side: “Democracy Depends on Journalism” and “Invest in Us.” Participation was strong and included a heavy dose of social media messaging.

Workers were jazzed by the events, which promoted our message, instilled pride in our members, and promoted a spirit of solidarity.

“Linking the units from across the country was really inspiring,” said John Hill, president of the Providence Newspaper Guild, which represents workers at three GateHouse papers in Rhode Island and Massachusetts. (See page 4 for more on May 3 activities.)

Soon after, the union established a working committee to develop joint mobilization and bargaining strategies at GateHouse-operated newspapers. At a meeting outside Washington, DC, on the weekend of May 19-21, activists representing Guild locals from six states started planning a national campaign patterned after the efforts of employees of Digital First Media.

The first “shareholder strategy” victory came on May 25, when investors in the New Media Investment Group, GateHouse Media’s parent company, voted overwhelmingly for a proposal offered by our St. Louis-based local, the United Media Guild (UMG). The purpose of the “good governance” proposal was to establish a more responsive Board of Directors by holding elections annually.

In a letter to investors sent prior to the shareholders meeting, Lunzer noted that, “At a time when newspaper publishers and employees must work together to promote the value of real news and find revenue solutions in a distressed industry, New Media has demoralized its workforce with an eternal wage freeze… constant layoffs and a hostile negotiating stance at NewsGuild-represented units.

“In our opinion, cost-cutting through headcount reductions has reached the point of negative returns.”

UMG President Jeff Gordon presented the proposal at the shareholders meeting in Fairport, NY, and pointed out that aggressive cost-cutting has eroded the company’s core product — local news.

But the meeting itself was mostly a formality. Most of the votes were cast by proxy, and the meeting lasted just 11 minutes.

When the results were tallied, Guild members were thrilled: The proposal garnered an astounding 83 percent of the vote.

The balloting was interpreted as a repudiation of the company’s strategy of aggressive acquisition of publications, followed by aggressive cost-cutting in newsrooms.

A large majority of shareholders — 64 percent — also “withheld votes” in the re-election of board chair Wesley Edens, signaling notable unrest among investors. Although Edens ran unopposed and was therefore re-elected, the result was essentially a vote of no-confidence.

Fortress Investment Group formed New Media from the ashes of GateHouse Media’s $1.2 million bankruptcy in 2013. Since then, it has collected roughly $60 million from management fees and incentive compensation.

The Guild’s newly-formed working committee will continue outreach to investors and analysts and engage New Media directors as well — urging the company to reinvest in its people.

“But it’s worth noting that journalism is thriving in many outlets across the country,” he added. “We hope the company’s shareholders will support our efforts to provide good, quality journalism and good, quality, professional jobs.”