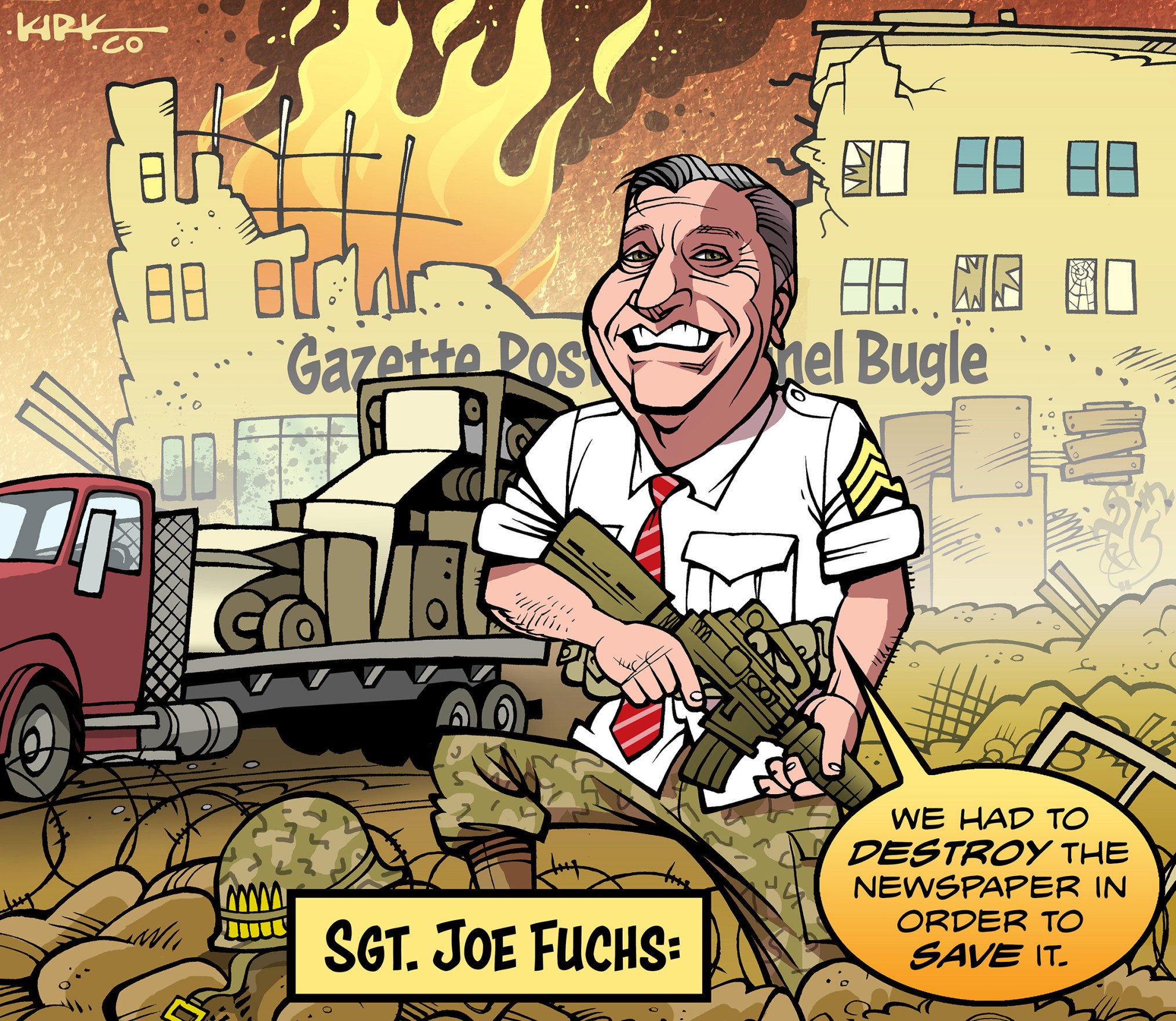 Digital First Media’s profits “near the top of the industry,” company says in takeover letter

This is a reprint of an article that appeared on Jan. 15 on DFMworkers.org.

Jan. 15, 2019 – Billing itself as a savior of newspapers, vulture hedge fund Alden Global Capital has made a $1.36 billion hostile takeover bid to acquire Gannett’s chain of more than 100 local papers.

If successful, the move would make Alden’s Digital First Media the largest newspaper chain in the country (in terms of circulation), while extending Alden’s heavily criticized slash-and-burn strategy to hundreds of U.S. communities.

The Wall Street Journal broke the story Sunday night and press releases and official statements from both DFM and Gannett confirmed the report early Monday. Gannett Co. shares rose from $9.75 on Friday to $11.71 on Monday following the news. DFM, which disclosed it already owns a 7.5 percent stake in Gannett, is offering to pay $12 a share.

Critics were swift to decry the attempted takeover and to challenge DFM’s portrayal of itself as “saving newspapers.”

Digital First and Alden appeared on the national radar last year after the Denver Post’s editorial board blasted Alden’s practices in a six-page section published just as the newsroom grappled with a 30 percent cut in staff. It became known as “The Denver Rebellion,” and management’s subsequent efforts to censor DFM papers’ coverage of the issue drew the scrutiny of media critics from the Washington Post to Bloomberg.

“I think it’s terrible news for Gannett’s readers and anyone who works for Gannett,” said Dan Kennedy, associate professor at Northeastern University’s School of Journalism in Boston, and author of the Media Nation blog, “The Wired City: Reimagining Journalism and Civic Life in the Post-Newspaper Age,” and “The Return of the Moguls.”

Gannett has garnered its own share of criticism for severe staff cuts, but Kennedy says DFM has taken the slashing to new lows.

“Gannett is no day at the beach, but at least Gannett is trying to figure out how to operate newspapers in long term,” he said. “With DFM, it doesn’t seem there is any particular interest in surviving.”

“A purchase of Gannett by Digital First Media would result in a dangerous loss of local reporting, more consolidation, and the strip-mining of Gannett’s newspaper assets at a time when the industry demands owners who are committed to reinvestment in journalism and when citizens need local news coverage more than ever,” the statement reads.

While Gannett and other papers across the country have undergone severe staff cuts, NewsGuild officials say DFM sets new records, cutting the union workforce at 12 DFM papers from 1,552 in 2012 to 487 in December 2018 — a decline of nearly 70 percent. A comparison with Bureau of Labor statistics and a study from The Pew Research Center shows this is nearly twice the national rate.

And because of the company’s aggressive consolidation of tasks like printing and copy editing, some DFM newsrooms face reporting deadlines as early as 2 p.m., severely limiting their ability to cover public meetings and even high school sports.

It’s these kinds of practices, which engender fears of more “news deserts” leaving communities with little to no coverage, that have observers worried about a DFM takeover of Gannett.

Harvard Nieman Lab’s media analyst Ken Doctor characterizes DFM as “the most reviled newspaper owner in the business” and said Gannett’s board might be able resist the takeover by merging with The Tribune Company.

On Monday, in contrasting its own profit margins with Gannett’s, DFM stated its earnings before taxes and other business expenses are “near the top of the industry,” flatly contradicting Fuchs’ earlier claim made to employees that DFM was merely earning “in the middle range.”

Commenting on the discrepancy, Doctor said, “They like to have it both ways. It’s just not a believable story.”

The privately held DFM, which has long held any hint of its financial status close to the vest, even posted this chart contrasting its profits with Gannett’s, citing “proprietary data” as the source for the DFM/MediaNews numbers.

“I’ve been hearing they are very well satisfied with their profits,” Doctor said.Doctor, who first reported detailed financials showing DFM papers were highly profitable in 2017, hasn’t reported numbers for the most recent fiscal year. That makes Alden’s acknowledgement of a 16.2 margin last year — with steadily increasing profits — all the more notable.

A spokesperson for DFM/Alden said the firm is a “long-term investor” in the newspaper business and is trying to make its papers sustainable for the long haul. The spokesperson said Alden had concerns about Gannett’s recent investments into digital ad services as opposed to investing in its core business of newspapers. Speaking on background, the spokesperson declined to comment further and said DFM board chairman Joe Fuchs’ letter to Gannett’s board speaks for itself.

Though there are clues throughout Fuchs’ letter indicating DFM’s primary interest is profit, not journalism, the letter claims the company’s draconian cuts were made to save the industry. Here’s a salient excerpt from Fuchs’ letter:

We Save Newspapers: When other people won’t step up, we do. We save newspapers and position them for a strong and profitable future so they can weather the secular decline.

Take our last two acquisitions – The Orange County Register and The Boston Herald. Both papers were left for dead and put into bankruptcy by their former owners, which could have caused a liquidation and a loss of all the jobs. MNG stepped up and invested in them when others wouldn’t, saving many of those jobs and providing for new jobs. We improved operations and made them viable and profitable by providing them with new leadership, a seasoned executive team and a new strategy when others clearly had failed.

“Clearly their idea of saving newspapers is to ‘harvest’ the properties until they’re no longer left,” Doctor said. “It’s an odd idea for saving news — like that old Vietnam War adage ‘We had to burn the village in order to save it.’”

In its Monday statement, DFM said it was initiating the offer partly because of Gannett’s investments in digital advertising products.

“I take it as meaning they don’t see any immediate profit in digital. They have no interest in it,” Kennedy said. “I’m sure they’re just saying ‘That’s not going to buy Mr. Smith another mansion, isn’t it?’”

Kennedy noted DFM’s decision to place Boston Herald editor Joe Sciacca at the helm of six other papers as an example of taking consolidation to ridiculous — some would say dangerous — new extremes.

“They do things that I don’t think would even occur to anyone else,” Kennedy said. “You can’t be the editor of seven dailies. It’s just absurd.”