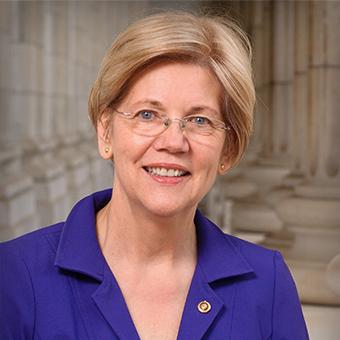 “These two newspapers, and the local, high-quality journalism that they produce, play a crucial role in the Western Massachusetts communities that they serve,” she wrote in a letter to the CEO of Newspapers of New England, which publishes the papers, and the Gazette’s editor-in-chief.

Employees at the papers contribute to producing “high-quality, local journalism that is crucial to a vibrant democracy and strong communities in Western Massachusetts,” Sen. Warren said.

“These employees deserve a chance to have a voice in their workplace, and, if they choose, join a union.”

Noting that well over half of eligible employees signed a petition requesting voluntary recognition of their union, the senator urged the CEO Aaron Julien and Editor-in-Chief Brooke Hauser to respect employees’ right form a union.

Sen. Warren’s letter came on the heels of an outpouring of community support last week, when a delegation of local elected officials, clergy, subscribers, teachers and other community leaders delivered a petition of support to the newsroom.

Warren joins other elected officials from the region who have voiced support for the Pioneer Valley NewsGuild, including U.S. Rep. Jim McGovern (D-MA), who said he sides with the workers in an interview with local radio host Monte Belmonte.

“We are over the moon to have Sen. Warren and Rep. McGovern in our corner,” said Dane Kuttler, who works in the Gazette’s classified department. “Having their support affirms the importance of the Gazette and Advocate employees’ work in the community and our commitment to form a union.”

Workers presented Julien with a petition signed by 73 percent of eligible employees on Nov. 12 and asked him to voluntarily recognize the Pioneer Valley NewsGuild, which is a unit of The NewsGuild-CWA. “We are taking this step to advocate for ourselves and for the future of this vital community institution,” they said at the time.

The workers began to organize about a year ago to address pay inequities between men and women, staff writer Dusty Christensen said. If management refuses to voluntarily recognize the union, an election will be held on Dec. 12, under the auspices of the National Labor Relations Board. Organizers expressed confidence that they would win a union vote.