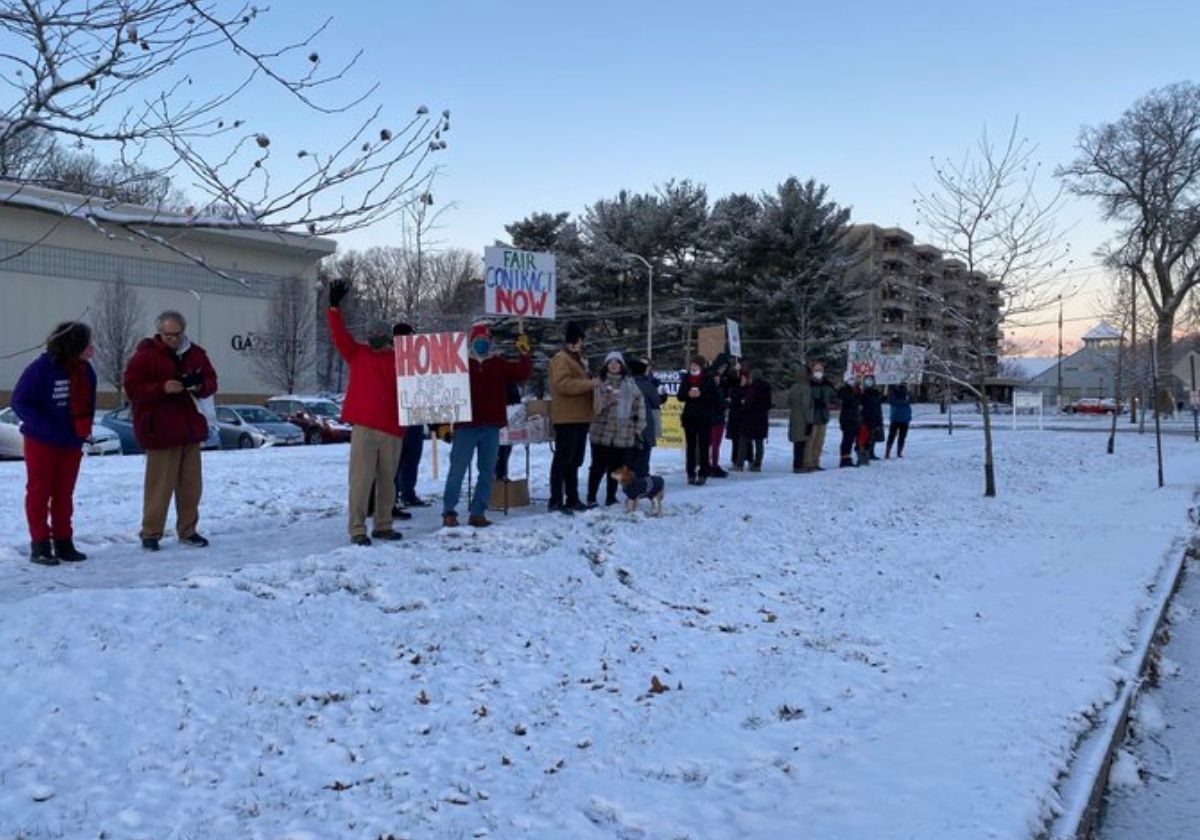 Members of the New York Times Tech Guild are a big step closer to winning their union and becoming the largest union of tech workers with bargaining rights in the country!

Last week, the National Labor Relations Board set a timeline for voting and rejected management’s blatant attempts to divide workers and sabotage their union campaign.

The NLRB denied the company’s claim that dozens of tech employees should be excluded from voting – and from joining the union – and ruled instead that the engineers, analysts, designers, project managers and product managers have a “community of interest” and can form a single unit.

What a disgrace for NY Times management, who have fought the workers every step of the way. In addition to attempting to carve up the unit, management refused to grant voluntary union recognition despite their editorial support for the practice. They hired a union-busting law firm (which inadvertently shared its anti-union strategy slide show with a union staffer) and infringed on workers’ right to express support for the union, in clear violation of federal law.

Workers asserted their rights every step of the way: They constantly reminded management and the world that 70% of Times’ tech workers signed a letter pledging to vote yes. They also organized a half-day work stoppage in August, filed unfair labor practice charges and rallied with hundreds of other Times workers and supporters in November.

And just last week the company continued their union-busting behavior by adding several new holidays for non-union employees (mostly managers) and refusing those same holidays to the majority of the staff. It was an interesting look to give holidays such as Juneteenth to NYT’s overwhelming white management right before Martin Luther King Jr. Day.

We know what it is and we will win.

Members of New York Mag Union negotiated a first contract after more than 2.5 years of bargaining with management of the magazine and Vox, the publication’s owner.

Their outstanding accomplishments include a $60,000 salary floor, which includes raises of more than $20,000 for their most underpaid members, and guaranteed yearly increases of between 2.75% and 3.25%.

In addition, they won a requirement that at least 35% of interviewees for all job categories must come from traditionally underrepresented communities, a strong policy on intellectual property rights, a ban on non-disclosure agreements in harassment or discrimination settlements, and an agreement that ensures our members will not be required to work from the office in unsafe conditions, and monthly home office expense reimbursement for employees working remotely.

They fought long and hard and mobilized their members and supporters to secure this victory!

Daily Hampshire Gazette workers ended 2021 by ratifying their first contract. They secured important wins after more than two years of negotiating with the Gazette’s owners, Newspapers of New England (NNE).

The contract includes protections against outsourcing, pay raises in each year of the two-year deal, paid breaks, the designation of Martin Luther King Day as a paid holiday and a generous severance package if layoffs occur.

The vote was unanimous among members of the Pioneer Valley NewsGuild who took part in balloting over the long Christmas weekend.

The deal was reached amid a series of escalating actions by the Pioneer Valley NewsGuild, including working to rule, picketing in front of the newspaper’s offices and a writers’ strike by a dozen prominent unpaid monthly columnists.

Staffers at Outside magazine announced the first new union organizing campaign of the year four days into 2022.

“Since the start of @outsidemagazine almost 45 years ago, we’ve been providing intrepid coverage of those who dare to push the limits of what we think is possible,” workers said. “So today, we are proud to announce that the Outside magazine editorial staff is forming a union.”

Members of Outside Union will become part of the Denver News Guild Local 37074, near where the company’s owners are located. Since last year, editorial teams have shrunk and overall turnover has been more than 35 percent.

The workers of Outside Union will advocate for better pay and benefits, procedures that allow for more transparency, worker protections, and accountability from management.

“This has been a difficult time for the industry and for the company and there have been years without any raises at all,” said Tom Olsen, a reporter at the paper and chair of the Duluth News Tribune unit of the Minnesota Newspaper and Communications Guild Local 37002.

Guild members at the paper are committed to journalism and local news, but negotiators conveyed to management that any agreement would have to include raises in every year of the contract and improvements on job security.

The three-year agreement includes across-the-board raises of 2%, 3% and 3%, and requires management to accept volunteers before resorting to layoffs, with volunteers receiving severance.

Workers at the Idaho Statesman, a McClatchy-owned publication, are calling out the company for forcing employees to pay for the essentials they need to do their job. Sound familiar?

They’ve been bargaining for a first contract for more than a year, seeking better pay, salary transparency and, oh yeah, fair expense reimbursement.

Please support them by sending a letter to company execs urging them to do the right thing.

Members of the Idaho News Guild need cell phones – to talk to sources, send emails, check Twitter, take photos and shoot video – but they’re currently required to use their own phones and they get just $25 a month reimbursement.

They spend their days driving to assignments but are reimbursed at just 33 cents per mile – slightly more than half the IRS rate. McClatchy also requires them to maintain a car for work and pay the full cost of insurance.

It’s time for McClatchy to meet the workers’ reasonable demands.

Staffers at Concerted Action, who support workers in their unionization efforts, announced last week that they’re ready to form their own union, Our Concerted Action. Represented by the Washington-Baltimore News Guild Local 32035, they’re seeking voluntary recognition.

Canadian workers at Change.org have officially won union recognition as part of CWA Canada. The Canada Industrial Relations Board (CIRB) certified the union as the bargaining agent and will hold a hearing Feb. 9 to determine the makeup of the bargaining unit.

The staffers who work to give everyone around the globe a voice on their platform believe they must have a voice, too.

The NewsGuild joined the Reporters Committee for Freedom of the Press and more than 60 other organizations in filing an amicus brief opposing a trial court’s prior restraint of the New York Times in a case involving Project Veritas. An appeal is pending before New York’s Appellate Division.

A New York trial court ordered the Times to return physical copies and destroy any electronic copies of legal memoranda at issue in the case on Dec. 24. The order also restrained the Times from disseminating the memoranda to any other person without permission of the court.

The amicus brief urges the appellate court to vacate the lower court’s order or, at a minimum, to stay the provisions requiring return and destruction of the memoranda pending the outcome of an appeal by the Times.

We’ve got several great training sessions lined up. Check them out!

Collective Action Works: Inside the Movement to Organize Media and Culture, 5-6:30 p.m. ET, Thurs., Jan. 20. Labour journalist Sarah Jaffe and union members in new media and culture unions discuss what they’ve won through collective bargaining, how equity goals are reflected in their campaigns, reflect on new strategies and assess the challenges that lie ahead. Register here.

Steward Training Module 5: A Union Representative, 6-8 p.m. ET, Wed., Jan. 26. Learn the rights of a steward and how to assert them, practice the role of union representative in investigatory or disciplinary meetings, practice the basics of preparing and presenting a grievance. Register here.

Check out this great guest essay in the New York Times: I’m a Longtime Union Organizer. But I Had Never Seen Anything Like This, by Vanessa Veselka.