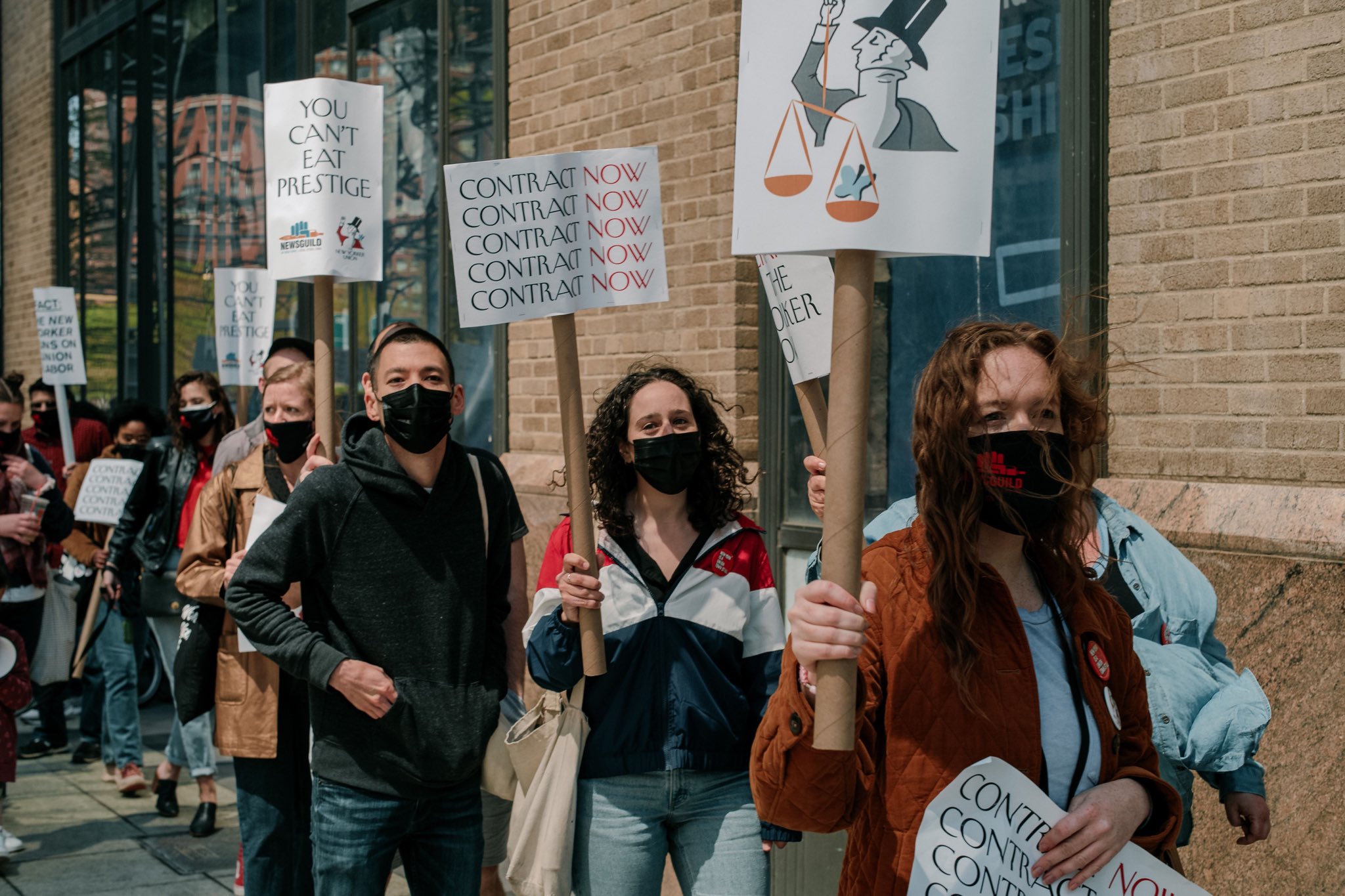 Today is World Press Freedom Day, and this year’s theme, “Information as a Public Good,” couldn’t be more appropriate. It reflects the severity of the crisis facing journalism and the need to reshape our industry. We cannot let hedge funds and profit-hungry chains run journalism into the ground. News and information are essential to empowering the people to participate in civic life.

The broken business model is why we’re fighting to the Save The News. It’s why we fought for – and won – federal aid to help news organizations to survive the pandemic. And it’s why we continue to advocate for policies that will encourage public support for information as a public good.

The U.S. Press Freedom Tracker confirmed the arrest of 137 members of the news media last year while they were covering racial justice protests. On Thursday, we joined with 90 other organizations urging Attorney General Merrick Garland to investigate law enforcement’s treatment of the press just last month as part of the Justice Department’s probes into police departments in Minneapolis and Louisville.

I joined workers in New York on Saturday for a May Day rally supporting Condé Nast workers, who overwhelmingly voted for a strike in March. The workers are back at the bargaining table this week and I do hope that management will start to move more in our direction. Negotiations have been dragging on for more than two years and it’s time workers at the New Yorker, Ars Technica and Pitchfork were treated with respect. It’s time for a contract.

Here’s a chance to tell the story you’ve always dreamed of while highlighting the crucial role of journalism in serving our democracy: the Washington Post Magazine is asking journalists to submit pitches for underreported stories. The final result will be a fall 2021 issue of the magazine consisting of stories that haven’t been reported on or are underreported due to reduced resources for local and/or regional news.

“Our goal is not to report on the state of local journalism, but to show what the American public misses when thousands of stories are not told,” the solicitation says.

The journalists of the New York Daily News won union recognition in a blowout on Friday, voting 55-3 to form the Daily News Union, a unit of the NewsGuild of New York. After a year of organizing, they’re eager to get to the bargaining table. As part of the Tribune chain, they will immediately be drawn into the fight against a takeover by Alden Global Capital.

The Minnesota Council of Nonprofits Union and Fair Vote Minnesota also won union recognition on Friday. Congratulations to those workers!

I was blown away this week by the amazing work of our Gannett caucus. They released a first-of-its-kind pay equity study of 14 of the company’s newsrooms last week that revealed pay disparities of as much as $27,000 for women and journalists of color and a workforce whiter than the communities they cover.

The study of nearly 450 employees also shows that unions make a difference: unionized newsrooms with pay scales in their contracts had significantly smaller gender and racial pay gaps than newly organized units with no contracts yet in place.

Gannett isn’t handling the news well. Just a couple of hours before a scheduled meeting to discuss the report, management cancelled, saying the study is “not a good faith effort to engage in a constructive dialogue” and challenging the methodology of the study!

They then went onto Twitter to criticize their own journalists for spreading misinformation. Their tweets were pretty quickly ratio’d—more replies or quote tweets than likes — and I responded with a direct call for us to work constructively on the important issue of pay inequities in newsrooms. It’s sad, but not unexpected, that executives and lawyers are out touch with the very people who work for them. It further shows why it’s so important that we continue to build our collective strength and stand together.

Last week we also saw more outrageous news about Alden Global Capital’s attempt to takeover Tribune Publishing, which Guild members at Tribune papers having been fighting tooth and nail. Alden says it can buy the Trib chain with surplus cash it has on hand, but the hedge fund’s merger agreement seems to contradict that claim.

A slew of government documents indicates a sketchy deal is afoot. If the deal goes through, Tribune may be saddled with $375 million in debt to pay for its own demise.

With Tribune shareholders scheduled to vote on Alden’s takeover bid May 21, the Guild’s Tribune units are stepping up efforts to find community members, civic-minded philanthropists and potential local owners to rescue their publications. (On Wednesday, the Save Local News coalition is sponsoring a community forum to create a vision for the future of local news in Chicago and throughout Illinois. Register here.)

We’re strongly urging Tribune shareholders to reject Alden’s proposed purchase because a potentially superior alternative is waiting in the wings.

The NewsGuild needs a new logo and we want your help! We know you can do it, because we’ve seen so many impressive logos from locals and units across the country. We’re asking for members with some design skills to submit a pitch, idea or portfolio. We’ll review the submissions and hire (and pay) a member to redesign our logo to represent our union for the next several decades.

Today we’re also calling on the Mexican government to bring an end to a more than 430-day strike by journalists – mostly women – of Notimex, the official government news agency.

In a letter to Mexican President Andres Manuel López Obrador from North American journalism unions, we wrote, “We object to the agency’s creation of an employer’s union and the hiring of strike-breaking replacement workers, measures condemned by the entire international labor movement.” We called on the agency to honor the collective bargaining agreement, pay earned benefits, refrain from retaliating against strikers and recognize the labor rights of all strikers.

A few weeks ago some folks might have seen that Nolan Rosenkrans resigned from the Toledo Blade and as president of our Toledo local. I’m excited to share that Nolan has joined the Guild full-time to work as a staffer to help the campaigns in both Toledo and Pittsburgh as they fight for fair contracts. Welcome aboard, Nolan!

There are some great events scheduled over the next few weeks. Turning the Tables – Participation and Power in Negotiations, a report from Jane McAlevey, Abby Lawlor, and the UC Berkeley Labor Center, will illustrate best practices for building the power to win in today’s challenging union climate. It features a series of case studies covering teachers, nurses, hotel workers, and journalists. Panelists include Kristina Bui, a former copy editor at the L.A. Times who is now an organizer with the Media Guild of the West, Local 39213 TNG-CWA, and Danielle Smith, a reporter at Law360 who serves on the Executive Committee of the NewsGuild of New York, Local 31003 TNG-CWA. It’s set for 1-2 p.m. ET, Thursday, May 6, 2021.

And at 7:30 p.m. ET on Monday, May 24 we’ll have the second of three webinars by labor lawyer Robert M. Schwartz. Just Cause: How to Win Disciplinary Grievances will cover lax enforcement, due process, hearsay evidence, disparate treatment, and progressive discipline. It will be held 7:30-9 p.m. EDT, Monday, May 24.

You can see all upcoming events on our calendar.