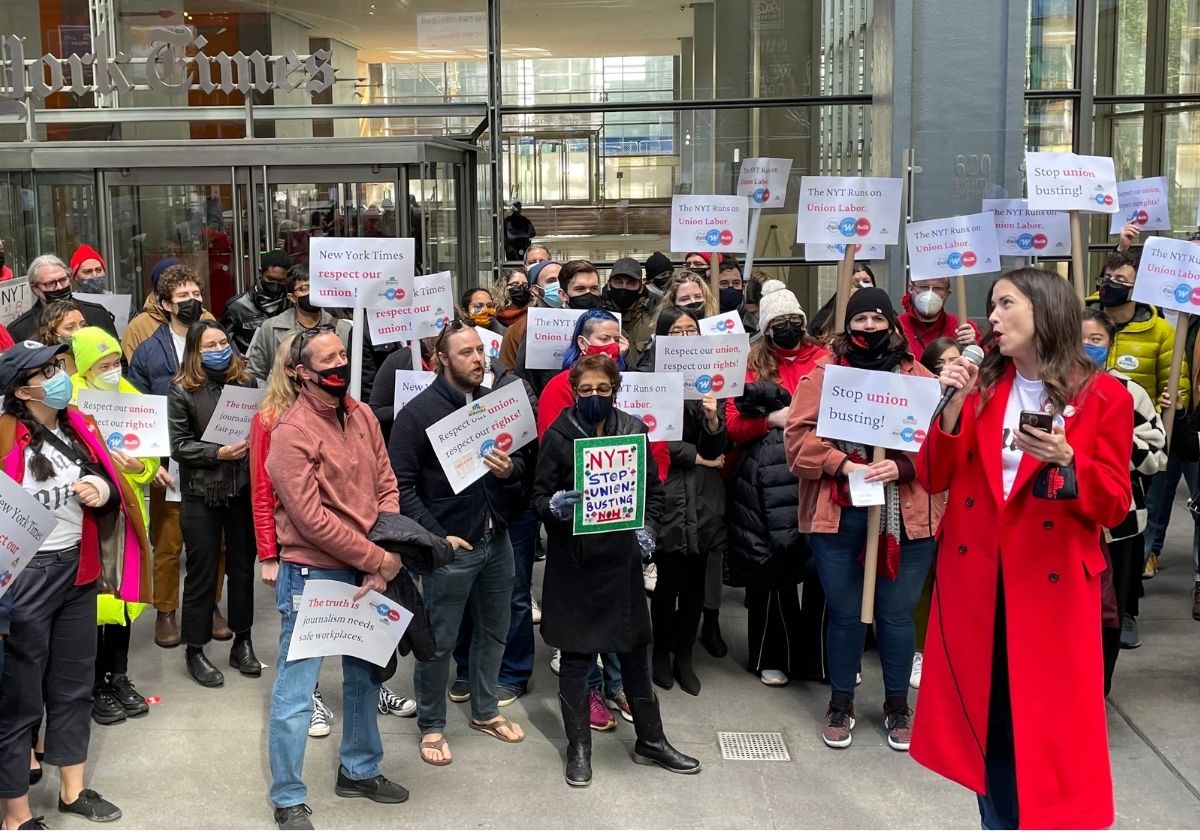 First! We’ve got a couple job openings at the Guild international. The first is for a staff representative, who would play the role of director of collective bargaining. This position has been vacant since Melissa Nelson retired in 2018. This person would review contract language and be a clearinghouse for organizing the trends happening across the Guild’s collective bargaining program and keeping folks coordinated. It’ll be a huge asset to our locals, who have asked for more support.

The job was OK’d after the SMART resolution passed at October’s CWA Convention.

The second job is for a new external organizer to support more worker campaigns. Already this year more than 2,100 workers have joined the Guild and we need to keep growing our capacity in organizing and collective bargaining to support these workers. We’ve been working to find solutions through Strategic Industry Funds and other sources to support our locals and these workers.

We’ll have the job postings out this week, so keep an eye on the Guild website.

The vulture known as Alden Global Capital is circling again. This time “the destroyer of newspapers” has set its sights on the news outlets of Lee Enterprises.

But the journalists of Lee’s 12 unionized newsrooms have other ideas. In a joint letter sent last week, they implored the Board of Directors to reject any offer by Alden Global Capital to acquire the company.

“Alden has cut their staffs at twice the rate of competitors, resulting in the loss of countless jobs,” they wrote. “They’ve fostered unhealthy and untenable workplaces that make it impossible to retain talent… Their investment history is littered with bankruptcies and federal probes, and they use secretive money to fund their shady dealings.”

If Alden is successful in a takeover, its three chains (Media News Group, Tribune and Lee) would rival industry leader Gannett, creating a duopoly in the traditional news industry. It would create more news deserts at the very moment when we need more factual news to combat rampant misinformation.

Alden’s takeover bid is the latest example of why we need to reimagine local news by supporting more locally owned newsrooms that are accountable to and invest in the communities they cover.

Last week Lee management implemented a “poison pill” to guard against a speedy takeover by Alden Global Capital and rejected three Alden-proposed candidates for Lee’s board of directors. I’m encouraged by these actions and urge the board to continue to do everything in its power to ward off Alden or risk the loss of more local news.

Hedge funds should not be allowed to own newsrooms. Period.

As part of the fight against Alden, Austin NewsGuild member Veronica Serrano, ​acting on behalf of the international Guild, urged the board of directors of the Texas County and District Retirement System to divest its holdings in Cerberus Capital Management at the board’s quarterly meeting in Austin on Thursday.

Cerberus is a primary financial backer of Alden Global Capital. The company provided the $218 million loan that enabled Alden to take over Tribune Publishing in June. Since then, staffing at Tribune newsrooms has declined by 36 percent.

I joined the digital rally at noon on Twitter Spaces and it was quite fun! More than 200 people joined the call, which operated like a sort of Twitter-meets-radio show.

After two years of fighting for a fair contract, the journalists are calling on management to negotiate adequate pay raises, affordable health care and a prohibition on using traffic and revenue metrics as a basis for issuing discipline to workers. They’re also fighting a management proposal that would impose ridiculous restrictions on the creative work staffers do outside of their jobs.

The company has refused to move from their proposal of a guaranteed wage increase of just 1% per year and a salary floor of only $50k – not nearly enough to live on in the cities where BuzzFeed has offices.

The strike by workers at Wirecutter, the product-review company owned by the New York Times, ended last week and all signs indicate that their job action was extremely effective. The job action ran from Black Friday through Cyber Monday and was timed to coincide with Wirecutter’s busiest week of the year.

Wirecutter Union members were thrilled with the support they received throughout the work stoppage and in the weeks leading up to it. Thousands of people boycotted the site and most of the company’s tweets were ratioed — receiving more replies to negotiate in good faith than likes or retweets. A GoFundMe account raised more than $42,000 to cover the lost wages of the striking workers.

Wirecutter journalists are back at the bargaining table today.

Gannett workers won a big one last week! Beginning Jan. 1, the company will finally reimburse employees at the federal mileage rate – 56 cents – when they use their own vehicles for work. Management’s announcement admitted that the change marks “a significant increase in the company’s overall reimbursement rate.”

As Az Republic Guild leader Rebekah Sanders tweeted, “This happened because we came together, we raised our voices and we didn’t back down. THOUSANDS of @Gannett journalists will now be reimbursed at the IRS mileage rate after languishing for years at a rate last used in 1999.”

Gannett’s refusal to properly compensate workers for mileage was an issue in the Az Republic Guild’s organizing campaign and they’ve been fighting for it ever since.

“Photographers especially will benefit,” Sanders pointed out. “They have driven thousands of miles and endangered themselves by putting off repairs they couldn’t afford because @Gannett refused to pay a fair mileage rate.

Of course the company is trying to restrict the increased mileage to non-union workers first while also eliminating a cell phone reimbursement. Every journalist should get the increased rate and Gannett should stop fighting its journalists. And cell phones, especially in this mobile and telework environment, are essential to doing the job.

Workers at the Pittsburgh Post-Gazette scored a big win last week, when a federal court rejected management’s attempt to reverse an arbitration ruling that required the company to cover increases in workers’ health insurance premiums. PG Management continues to refuse to bargain in good faith. Shame on the Blocks, the family that owns the paper and shamelessly exploits its workers!

An arbitrator ruled in December 2019 that the Post-Gazette was required to pay for costs necessary to maintain workers’ health insurance at levels outlined in their collective bargaining agreement until a new contract is reached. The arbitrator also ruled that Guild members must be made whole for any out-of-pocket expenses they incurred as a result of management’s failure to maintain the contractual level of benefits.

“Today’s ruling is a huge victory for our members and in our battle for fair treatment at the Post-Gazette,” the Newspaper Guild of Pittsburgh said. “It shows once again that the company has been engaging in illegal anti-worker tactics for years.”

Members of the Crosscut Union, representing workers at two nonprofit news outlets based in the Northwest, voted overwhelmingly to ratify their first contract with Cascade Public Media on Dec. 1.

Crosscut Union members have plenty to be proud of. Highlights of the agreement include:

On the legislative front, Rep. Mark DeSaulnier (D-CA) introduced The Saving Local News Act (H.R. 6068) last month, which would change the U.S. tax code to make it easier for newspapers to become non-profits. This is a good bill and I applaud the congressman’s support for local journalism.

Please continue to urge your senators to support the provision in the Build Back Better bill that would provide a $25,000 jobs tax credit that would be available for any legit employer of local journalists. It would be one of the largest public investments in journalism in U.S. history.

We’ve lost tens of thousands of local journalists over the last decade. That’s meant fewer journalists covering local government meetings, local business and even high school sports. Journalists are essential to holding power to account, watching over our democracy and providing a voice to the voiceless.

Journalists of the Atlantic DOT Guild scored a win last month when the National Labor Relations Board issued a complaint against Gannett for unfair labor practices – better known as union-busting.

Charges include that Gannett management promised employees improved career opportunities if they refrained from union organizing, interrogated workers about their union activities and sympathies, promised employees benefits for rejecting the union, told workers that choosing a union wouldn’t get them better wages and benefits, and created an impression among its employees that their union activities were under surveillance.

Digital producers at the Atlantic Digital Optimization Team (DOT) won their union vote in August. They work across a five-state region that produces 37 websites in New York, New Jersey, Pennsylvania, Delaware and Maryland.