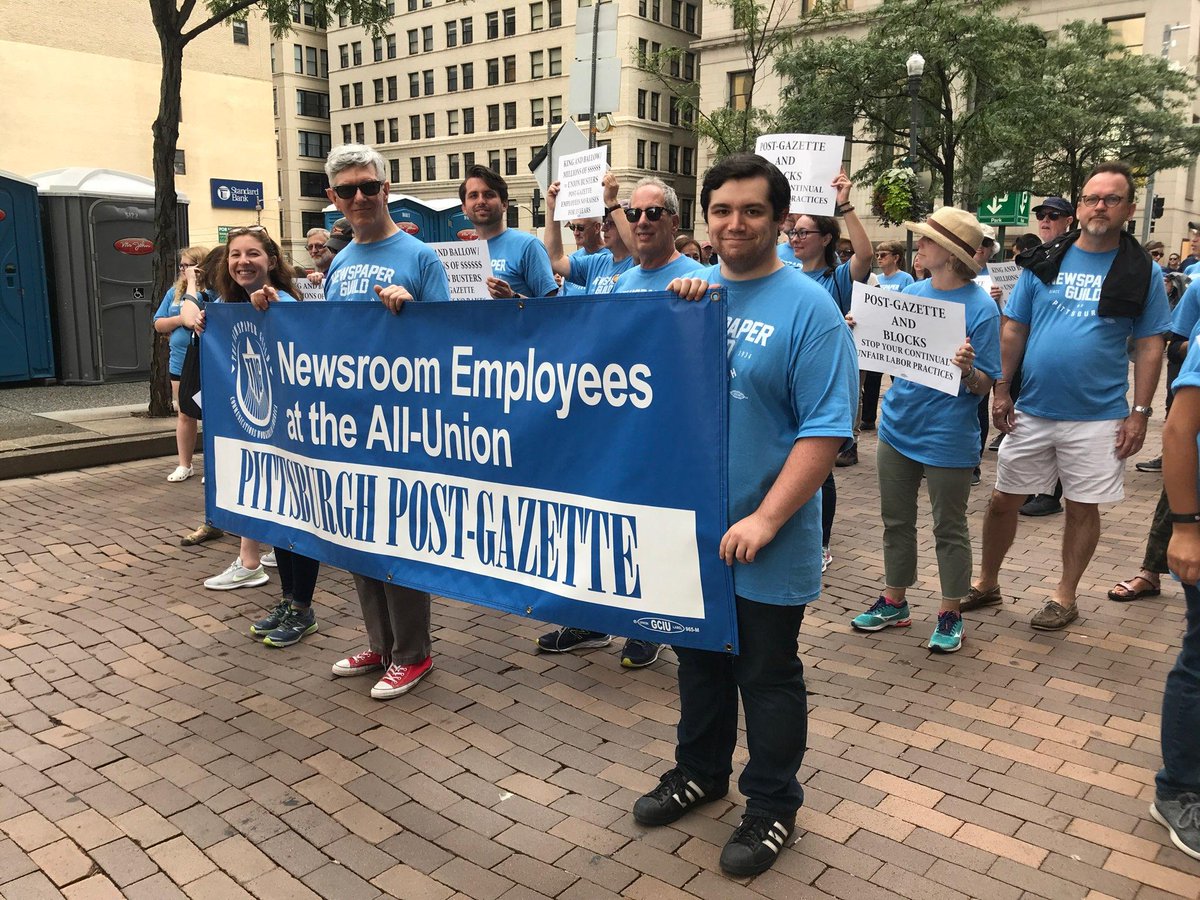 Citing an unrelenting course of bad faith and surface bargaining, untenable and abusive working conditions unlawfully imposed upon NewsGuild members at the Pittsburgh Post-Gazette and a despicable pattern of hostile treatment of workers by the company’s owners, The NewsGuild-CWA Executive Council unanimously endorsed Guild members’ request to strike.

“A decision to strike is never made lightly,” said NewsGuild President Jon Schleuss. “This one comes amid a worldwide pandemic and resulting economic crisis. It underscores the attack on more than 120 award-winning journalists, whose repeated attempts to engage the company in good faith bargaining have yielded no results.”

The 10-member Executive Council unanimously approved the strike vote last week and announced it during an online membership meeting in Pittsburgh Friday. The Newspaper Guild of Pittsburgh will continue strike preparations and present a plan to the Communications Workers of America Executive Board for approval.

Employees have filed numerous unfair labor practice charges with the National Labor Relations Board, seeking intervention from the federal government to correct the employer’s unlawful intransigence that has led to this precarious moment. The union calls on the NLRB to step up, enforce federal labor law and order the employer to engage in meaningful, good faith bargaining needed to reach an amicable resolution.

“The staff of the Post-Gazette was awarded the Pulitzer Prize, journalism’s top honor, in 2019 for its coverage of the Tree of Life massacre,” said NewsGuild Executive Vice President Marian Needham. “And what’s their reward? An unrelenting assault on the bargaining process, their contract and their careers by Post-Gazette management.”

The assault has been led by King and Ballow, a law firm hired by twin brothers John Robinson and Allan Block. The brothers control half of Block Communications Inc., the parent company that owns the Post-Gazette, Toledo Blade, local TV stations, Buckeye Broadband and MaxxSouth Broadband.

Bargaining proceeded over more than three years as the employer pushed to reduce benefits and place them under its total discretionary control, making access to health care more expensive – even as the coronavirus death toll nears 200,000 in the U.S. Throughout the bargaining, the employer maintained an arbitrary and inflexible stance aimed at undermining any chance of agreement. The company has refused for 14 years to give its hard-working, talented and loyal employees an across-the-board raise, and its imposed conditions actually continue to maintain significant pay cuts that have been in effect for that time.

Post-Gazette journalists were Pulitzer Prize finalists this year, in addition to winning the breaking news Pulitzer in 2019, and the paper was named 2020 Newspaper of the Year by the Pennsylvania NewsMedia Association.

Meanwhile, John Robinson Block, who serves as publisher, promoted Keith Burris, the writer of widely ridiculed editorial “Reason as Racism,” to executive editor last year. NewsGuild leaders called on Burris to resign after he sidelined and disciplined Black journalists who reported on protests following the killing of George Floyd.

Guild members first responded with votes of no confidence in the publisher, of Burris, Block Communications and, most recently, with an overwhelming strike authorization vote on Aug. 10. That followed the Post-Gazette’s July 27 declaration of a bargaining impasse and unlawful imposition of economic concessions and other onerous conditions.

The NewsGuild-CWA Executive Council cannot tolerate such reprehensible abuses of the bargaining process, designed to eviscerate a collective bargaining agreement built up over eight decades of good faith negotiations. The company and the Block family are robbing the city of Pittsburgh of the vigilant, expert journalism that communities throughout the country are depending on in these fraught times.

“We call on the Block family to immediately change its destructive, unlawful and demoralizing playbook and recognize its employees for the essential workers they are,” Schleuss said.

“If any members of the Block family are left who care, they need to get engaged, jettison King and Ballow and start bargaining in good faith,” Schleuss said.

Is the Post-Gazette’s new executive editor, Stan Wischnowski, a sign of a positive change? Wischnowski’s first day is Monday after resigning from the Philadelphia Inquirer in June.

“Stan has a track record of working with the Guild rather than punishing it,” said Diane Mastrull, an editor at the Philadelphia Inquirer, president of the Philadelphia NewsGuild and regional vice president of The NewsGuild. “Stan used to express disgust over what was happening in the Post-Gazette newsroom. Now’s his chance to do something about it.”

“These unfair and deplorable tactics being used by the Block family and their union busting law firm King and Ballow are not only an assault on the dedicated union members of the Pittsburgh Post-Gazette but is an attack on organized labor,” said NewsGuild Regional Vice President Bill Baker.

The NewsGuild calls on the community to join us in condemning the mistreatment of the journalists whose work you rely on.

The NewsGuild-CWA represents more than 24,000 journalists and other communications professionals in the United States and Canada, including approximately 3,000 who have joined in the last two years. NewsGuild members work at hundreds of news outlets—including big publications like the New York Times, small papers like the Pottstown Mercury and digital-only sites like Buzzfeed News. The Guild is a sector of the 600,000-member Communications Workers of America.