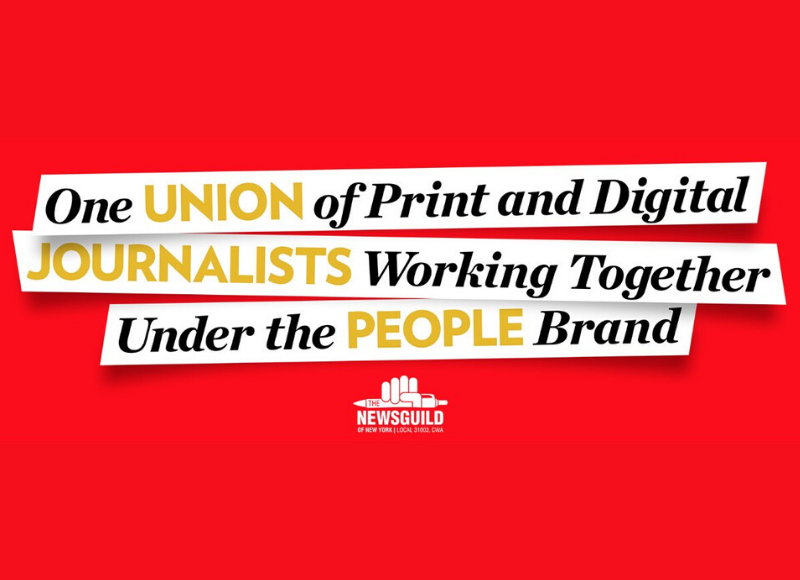 Sept. 14, 2020 – Digital employees of People Magazine voted 45-3 in favor of unionizing Friday in a digital vote conducted by the American Arbitration Association (AAA). The overwhelming victory secured the staffers’ representation by The NewsGuild of New York local of The NewsGuild-CWA.

Digital staffers announced on May 13, 2020, that an overwhelming majority of employees had signed union authorization cards and requested voluntary recognition from the Meredith Corporation, the magazine’s parent company. Despite widespread support, Meredith CEO Tom Harty refused to recognize the union and insisted on an election.

As a result of the vote, digital workers at People will join their print colleagues, who have been represented by the Guild for decades, as union-represented employees.

Digital staffers are seeking to close the arbitrary “print-digital divide” and negotiate a contract that extends the same robust benefits and protections the magazine’s print staffers have enjoyed for years to everyone in the newsroom. Employees at People, the most-read magazine in the country, are looking forward to making their newsroom a thriving place to work.

“The experience of People digital working together as a group to help secure a future for ourselves — and our publication — has been an inspiring and rewarding process,” said Staff Crime Editor Laura Barcella. “We’re all looking forward to finally securing a strong contract with Meredith.”

Greg Hanlon, Crime News Editor, said, “We’re proud we came together as a newsroom to secure the future of People. As a staff, we feel empowered — and we believe an empowered, united staff is one that will produce the best-quality work.”

Dan Neuburger, People Magazine Unit Chair, said, “I’m thrilled to finally and officially welcome our digital colleagues into our union. I look forward to, alongside our newest unionized colleagues, negotiating a strong contract that protects and benefits all of People Magazine’s editorial employees.”

“Today’s overwhelming win is a victory for media professionals in the NewsGuild-CWA across the nation and for those who want to organize their newsrooms,” said Susan DeCarava, President of The NewsGuild of New York. “This election further bolsters the foundation of any union: solidarity. Our members stood united and won. I expect that Tom Harty and Meredith leadership will hear this resounding mandate for the workers’ voice in the newsroom and come to the table in good faith to bargain a new contract.”