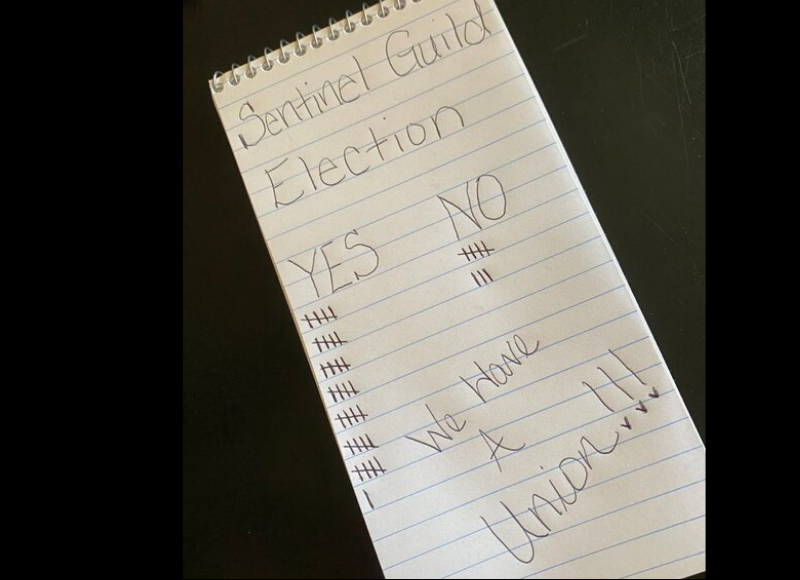 May 12, 2020 – Journalists at the Orlando Sentinel won a resounding victory Tuesday, voting 36-8 to form the Sentinel Guild.The vote will give photographers, reporters, editors, columnists and staff a voice at work and the right to negotiate with Tribune Publishing, the newspaper’s Chicago-based parent company. The Sentinel Guild will become a unit of Local 3108 of The NewsGuild-CWA.

The newly-minted union members were ecstatic after the vote count, tweeting “WE WON!! The journalists in our newsroom have spoken, deciding overwhelmingly that we deserve a seat at the table to bargain with Tribune and protect the future of local journalism. Sentinel Guild is no longer a dream but a reality.”

WE WON!! 🎉🎉🎉 The journalists in our newsroom have spoken, deciding overwhelmingly that we deserve a seat at the table to bargain with Tribune and protect the future of local journalism. Sentinel Guild is no longer a dream but a reality. 81% of ballots counted were marked YES.

Jason Garcia, a 14-year veteran reporter at the Sentinel, said, “We’re in a period of unprecedented chaos but this much is now certain: The journalists of the Orlando Sentinel will have a voice in deciding the strategic future of our company. I’m so proud of my friends, colleagues and fellow journalists. We — and local journalism in Central Florida — have grown stronger today.”

The group faced unexpected delays when their scheduled March 25 election was canceled by the National Labor Relations Board due to COVID-19 restrictions, causing a delay of nearly seven weeks for balloting. During that time the group sought voluntary recognition from management, engaging in remote online actions to make their demands.

Mail-in ballots were counted at 10:30 a.m. Tuesday in a process overseen by the NLRB at the agency’s regional office in Tampa. Union and management representatives observed the count via Zoom. The NLRB mailed ballots to 52 eligible employees on April 16.  Six returned ballots were challenged. Because they would not have affected the outcome of the vote, they were not counted.

Nearly 80 percent of eligible staffers signed union authorization cards signaling their desire to be represented by the Sentinel Guild when they announced their union drive on Feb. 25. Despite this supermajority, Tribune Publishing refused to voluntarily recognize the Sentinel Guild.

“Without the power to bargain over working conditions, the Sentinel Guild could not negotiate the terms of the furloughs and pay cuts or prevent layoffs this summer, which other unionized Tribune papers accomplished.”

Gabrielle Russon, who has been a Sentinel reporter since November 2014, said, “Today feels really empowering. We’re coming together to hold our company accountable and to demand a voice at the table. But it’s a really dark time, too, for us at the Sentinel. My colleagues and I are taking furloughs or pay cuts. We need a union now more than ever.”

The group is part of a surge in union organizing in the news industry, becoming the fifth Florida newsroom to unionize in the past four years and the fifth new NewsGuild unit in two weeks.

“For the first time, Orlando Sentinel journalists will have a hand in their future and a strong voice to advocate for themselves and the importance of local journalism for our region,” they said.

Photo: Lisa Maria Garza’s handwritten vote tally. The official NLRB tally will be emailed to management and the union.