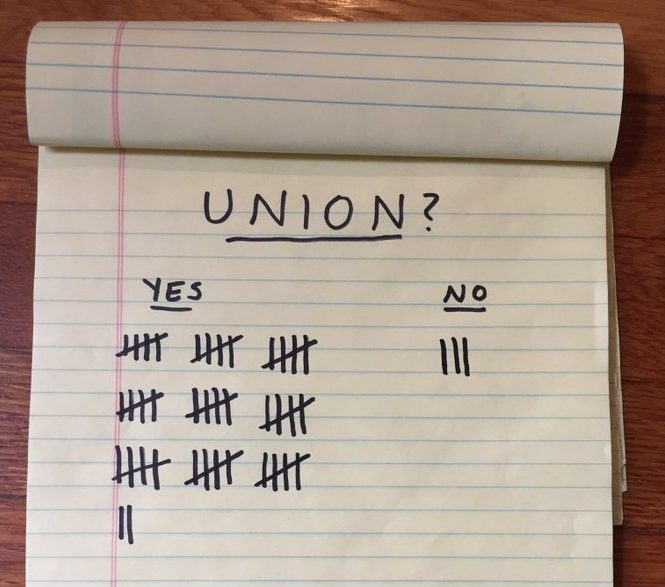 April 28, 2020 — Journalists of The Roanoke Times and Laker Weekly won a stunning victory Tuesday, voting 47-3 to establish the Timesland News Guild. The group will become part of the Washington-Baltimore Local 32035 of The NewsGuild-CWA.

“Today, The Roanoke Times newsroom stood up, not just for each other, but for our readers. Coming together as Timesland News Guild will finally give us a voice in the decisions that affect one of our most important community institutions: local news,” said Tonia Moxley, a reporter who has worked at the Roanoke Times for 20 years.

The 94 percent win is part of surge in union organizing among journalists and other news industry employees. More than 2,700 employees joined the Guild’s ranks over the last two years, and four new groups of journalists announced union drives just this month.

The union certification election was overseen by the National Labor Relations Board. Mail-in ballots were counted at 11 a.m at the agency’s regional office in Winston-Salem, NC, with observers watching via Skype. The NLRB began mailing ballots on April 10 to more than 50 Roanoke Times newsroom employees who qualified for Guild membership.

The Timesland News Guild will soon begin negotiations over working conditions with Iowa-based Lee Enterprises, which on March 16 bought The Roanoke Times, Laker Weekly and about 30 other newspapers from Warren Buffett’s Berkshire Hathaway Media Group. The Timesland News Guild announced on March 17 its intent to form a union after more than 80 percent of eligible employees signed union authorization cards.

Last month, the NLRB suspended elections because of COVID-19 concerns. Despite broad newsroom and community support, as well as repeated pleas from subscribers, former employees and Guild members, Lee refused to voluntarily recognize the Timesland News Guild. Voluntary recognition would have allowed the union to begin bargaining over working conditions.

The NLRB recommenced elections on April 6, but not before Lee announced mandatory furloughs, due to the economic fallout from COVID-19. All employees will be out of work for two weeks over the next three months, harming their personal finances and the Times’ ability to provide life-saving information to the communities it serves. Because the Timesland News Guild had not yet been certified by an election, it lacked the legal authority to negotiate conditions on the furloughs, as other unionized papers were entitled to do.

“The overwhelming vote in favor of unionizing is a win, not just for Roanoke Times journalists, but for our community and readers, too,” said Casey Fabris, a business reporter who joined the Times in 2015. “With a seat at the table, we can work to protect and preserve local news, which The Roanoke Times has been dedicated to producing for 134 years.”

“Our union win is a win for all Southwest Virginians,” said Shawn Garrett, a graphic designer at the paper since 2015. “The Times might be owned by a company halfway across the country, but a union will help ensure that the paper will be made by people who live here, who love this region and know it deeply. In short, it will work to keep the local paper local.”

The Timesland News Guild derives its name from a term coined by The Roanoke Times sports department in the 1950s to describe the areas across Southwest Virginia that depend on the paper’s coverage. The guild seeks to work with Lee to strengthen The Times, by holding leaders accountable to high journalistic standards that readers deserve; advocating for the restoration of jobs and beats that serve the community; and negotiating fair pay and employment practices.