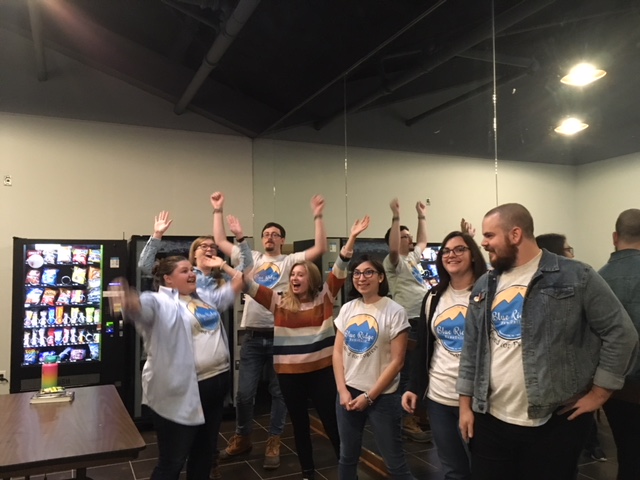 Oct. 30, 2019 – The journalists of the Daily Progress in Charlottesville, VA, voted 12 to 1 to form the Blue Ridge Guild on Wednesday.

The vote via secret ballot came two weeks after The Daily Progress staffers announced their intention to form a union, which will allow employees to collectively bargain with BH Media Group, the publication’s owner since 2012.

A representative from the National Labor Relations Board monitored the election held in the newsroom’s break room.

The Blue Ridge NewsGuild, the paper’s union, represents reporters, copy editors, photographers and a handful of other newsroom employees.

“We’ve spent the last 10 months focused on this goal, and I can’t believe we achieved this historic milestone,” said Katherine Knott, the K-12 education reporter at the paper and a guild organizer. “Today is a great day for local journalism and the Progress.”

Knott said the unionization effort has made the newsroom stronger as coworkers have come together to fight for a better workplace. Moving forward, the guild will seek input from the entire newsroom as it looks to negotiate a contract with BH Media, she said.

The company’s flagship paper, the Omaha World-Herald, unionized a year ago and is still working on an initial contract.

The Blue Ridge NewsGuild is a unit of The NewsGuild-CWA’s Washington-Baltimore Local.

Through unionizing, The Daily Progress staff is seeking a voice in the future of the publication during uncertain times for the journalism industry, the group said in a statement.

“We’re proud of our work, but we don’t want to come to work every day afraid that a coworker will be laid off or hear about another corporate change that will make it harder for us to do what we want to do — report the news and cover our communities,” the Guild wrote in its mission statement.

Since going public, the Blue Ridge NewsGuild has seen an outpouring of support from that community, highlighting that Central Virginia recognizes the importance of local news. On Tuesday, the Guild published testimonials from former staff members who support the unionization effort and left because of low pay, growing workloads and lack of growth opportunities.

“I left the Progress for an outlet on the brink of unionization, and when it was finalized, I found myself no longer living with the miserable anxiety born from financial insecurity,” wrote Dean Seal, who worked at the paper from 2014 to 2017. “The Progress’ long-neglected editorial staff deserves that same peace. Journalism has never been more imperiled. The honor and respect it deserves, implicitly and explicitly, is long overdue.”

The Daily Progress is the third BH-owned publication to form a union and joins the Virginian-Pilot, the Daily Press and the Richmond Times-Dispatch as other Virginia newspaper with unions.

“This is a great day for The Progress and the community,” said Nolan Stout, the paper’s Charlottesville reporter. “This is the first step in ensuring the longevity and sustainability of a vibrant newspaper in Charlottesville.”

The Blue Ridge NewsGuild is part of a historic unionization wave sweeping across the country. The Miami Herald also voted on Wednesday, and The Columbian in Vancouver, Washington, will have its election Thursday.