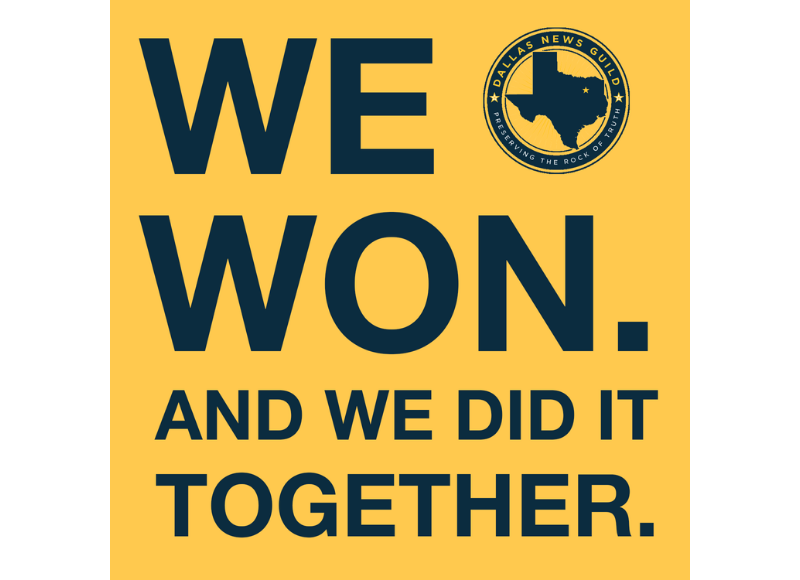 Oct. 16, 2020 – The journalists of Dallas Morning News and Al Día won a decisive victory on Friday, with 75 percent voting in favor of forming the Dallas News Guild. The 84-28 vote made them the only unionized newsroom in Texas. (But probably not for long! The Fort Worth NewsGuild announced a union campaign on Thursday.)

“Today is a huge win for the future of local journalism in Dallas and an important step in preserving the legacy of the Dallas Morning News and Al Día,” said News business reporter Dom DiFurio. The vote will help the publications fulfill their mission of “conveying the truth of the ninth largest metro in the country,” he said.

“The Dallas News Guild is eager to move on to the next step and bargain with A. H. Belo,” the papers’ owners, he said.

Cassandra Jaramillo, a News reporter covering public safety, spent the last year helping to
organize the union while covering the impact of the pandemic and protests against
police shootings.

“Local journalists are on the frontlines of the coronavirus pandemic and the social
justice movement,” she said. “Dallas needs a strong newsroom now more than ever. We look
forward to working with management to build an equitable and diverse
newsroom.”

Workers at @AlDiaDallas and @dallasnews voted 84 to 28 to unionize the newsroom today after the NLRB counted the mail-in ballots via Zoom. This makes our institution the only unionized newsroom in Texas. Today, we celebrate a historic victory for our workers! pic.twitter.com/HZty9aOAYd

Imelda García, a reporter at Al Día, said, “Today begins a new chapter in the history of journalism in Texas, where workers will be able to work together with management to help the company grow. It’s not just about having more protected workers, but about finding strategies that help us all prosper and better serve our people, improving equity and diversity. It’s a win not only for the Dallas News Guild, but for the North Texas community.”

David Tarrant, a longtime reporter at the News, said: “We’re thrilled that our colleagues overwhelmingly voted yes to organize themselves and be represented by the Dallas News Guild, a unit of the NewsGuild-Communications Workers of America. We’ve been working on this for a year, and we’re all extremely happy about the outcome and excited to move forward.”

“We are hardworking and dedicated journalists who want to continue telling the stories of the diverse community,” said Lorena Flores, digital editor for Al Día. “I am looking forward to an even better partnership with leadership to keep growing as a news organization.”

Ironically, the Dallas Morning News is credited with coining the term “Right To Work” in a Labor Day 1941 editorial opposing unions.

“As a southerner I’m thrilled to see journalists at the largest newsroom in Texas stand up and demand a seat at the table to protect their work,” said NewsGuild-CWA President Jon Schleuss. “This is a good day for workers and Americans.”