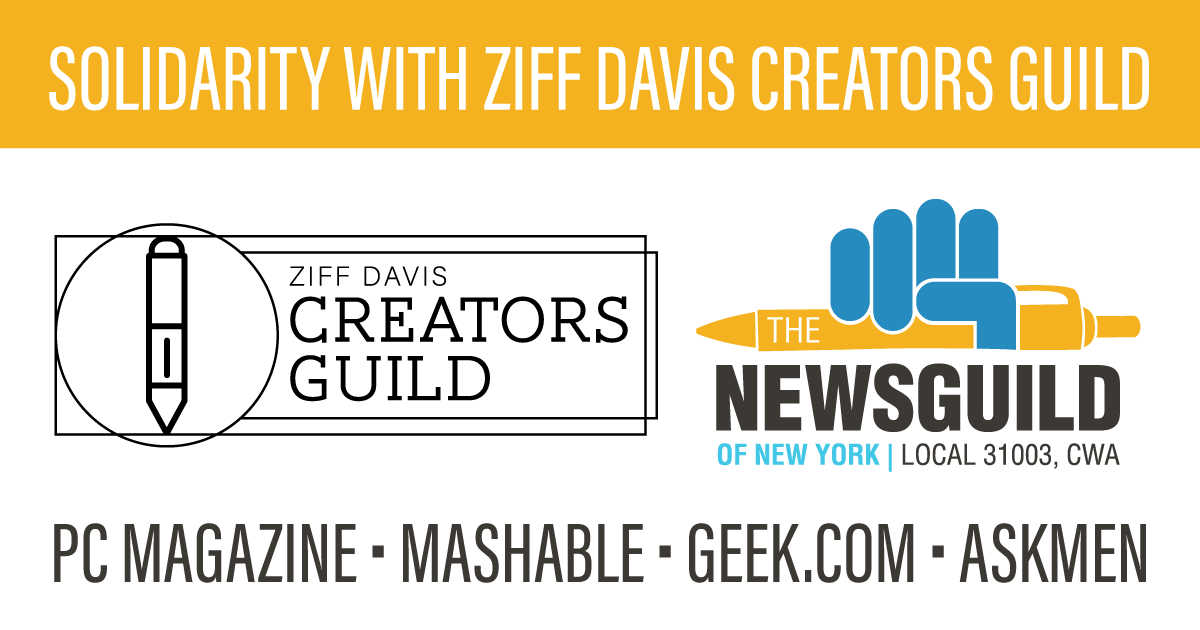 Nov. 29, 2018 – Editorial employees at PC Magazine, Mashable, Geek.com and AskMen have signed on to a union organizing effort in overwhelming numbers, the NewsGuild of New York has announced. They are asking parent company Ziff Davis to voluntarily recognize the union.

Employees of the publications, which cover tech, culture, entertainment and lifestyle, are hoping to form a single bargaining unit within the NewsGuild of New York, a local of The NewsGuild-CWA.The union intends to represent approximately 40 workers at Mashable and 28 at PCMag, as well as a staffer at each of the other sites.

As of Thursday, 85 percent of eligible staffers – including reporters, editors, social media strategists, artists, and video producers – have signed on to the effort. The editorial staff presented their request for recognition to Ziff Davis management Thursday morning.

Staffers cite stagnant wages, at-will employment, protection from harassment, and the need for a voice in the newsroom as motivating their desire to unionize. Constant corporate re-strategizing leaves employees vulnerable, they say.

Ziff Davis purchased Mashable in December 2017 and oversaw its second round of layoffs in two years. Staffing levels are at historic lows for the site, leaving many employees overworked and eager for representation.

Members seek bargaining power over proper staffing and equipment to produce their publications, especially as Ziff Davis purchases new properties each year. “We create a lot of value for this company. If management wants to acquire new companies, they also need to invest in their existing staff,” said PC Mag staffer Alice Newcome-Beill.

The NewsGuild-CWA has won more than a dozen union organizing campaigns in 2018 – including at The Los Angeles Times, The Chicago Tribune, The New Yorker, The New Republic and Mic.com. Union drives are also underway at news outlets in Massachusetts and Maryland.

“The decision of workers at PC Magazine, Mashable, Geek.com and AskMen to form a union is part of an inspiring national trend,” said NewsGuild-CWA President Bernie Lunzer. “Employees of more than a dozen news organizations – from the Los Angeles Times to the Casper (Wy) Star-Tribune – have organized with the Guild so far this year. Journalists are taking a stand across the country,” Lunzer said, “and fighting for the future of journalism.”

“I’m proud to welcome the editorial workers of Ziff Davis to the NewsGuild of New York,” said Grant Glickson, local president. “Every media professional deserves a voice in their workplace. We call on management to quickly recognize the union so that we can work toward securing a strong collective bargaining agreement for this inspiring group of editorial and creative professionals.”

The NewsGuild of New York, Local 31003 of The NewsGuild-CWA, represents nearly 3,000 media professionals and other employees at New York area news organizations, including The New York Times, Thomson Reuters, The Nation, The New Republic and The Daily Beast. The NewsGuild-CWA represents more than 20,000 journalists and other communications professionals at publications and digital sites in the United States, Canada and Puerto Rico.