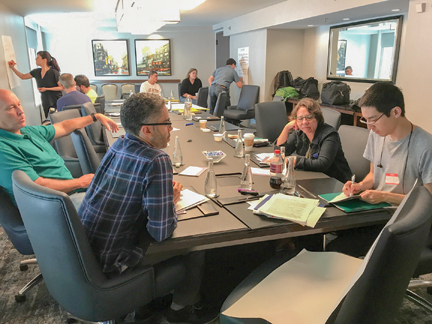 September 2017 – Thanks for the training. It worked!” That’s what Jill Bleed said after union activists at the Associated Press signed up 18 new members over the summer.

Bleed, chair of the local Bargaining Committee, was referring to techniques she and others learned at a Guild District Council meeting in June that included a training session on organizing.

In August, in keeping with tradition, the local invited union members to a mobilizing meeting as they prepared for contract negotiations. The attendees were almost all new to AP or to union activity, Bleed reports, which “brought in an enthusiasm and fire.”

At the meeting, officers sought to demystify the union — by introducing themselves, discussing their background, and explaining how the local fits in with the Guild nationally.

“Attendees felt they were in good company after finding out how many other major media organizations are also unionized,” Bleed said.

During the recruiting portion of the meeting, they developed personalized lists that showed participants members and non-members in their bureau or department. Then they analyzed the lists to see who should be targeted for recruitment, with the highest priority given to new hires and those sympathetic to the union.