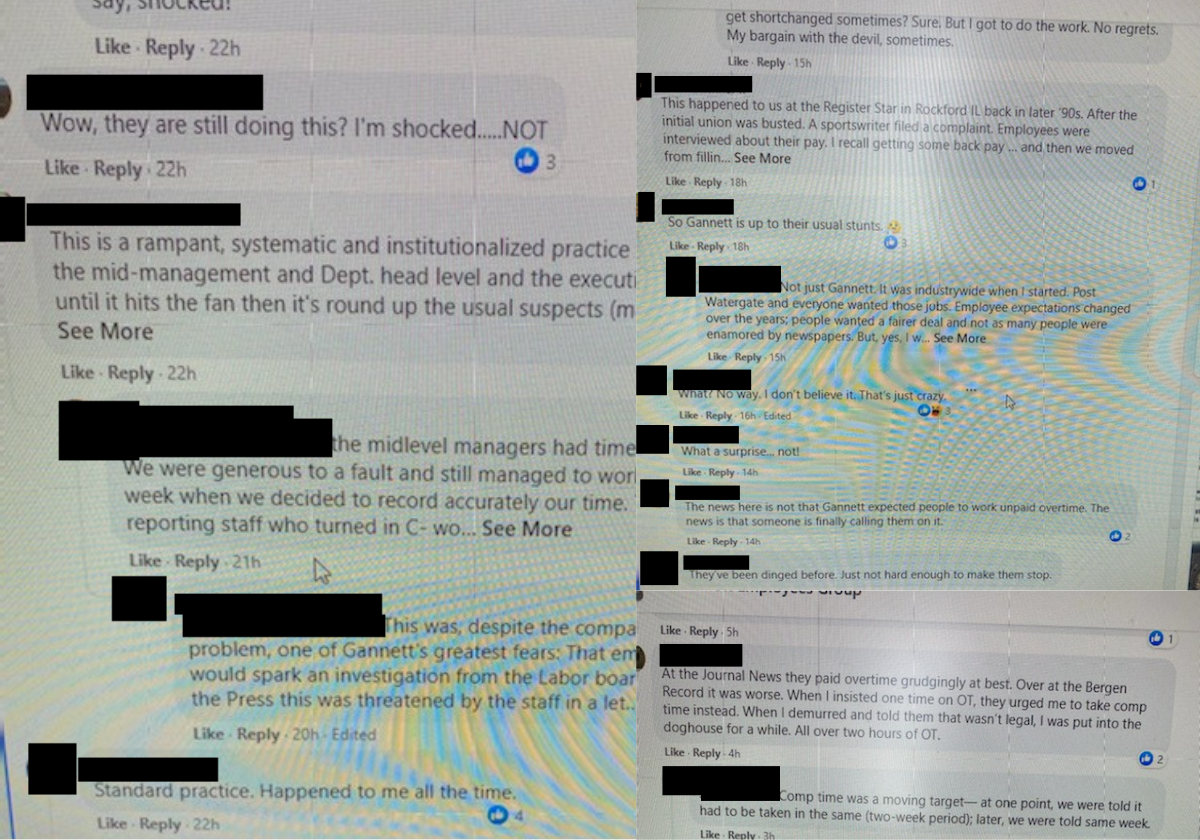 Journalists at the nation’s biggest news chain are rejecting the company’s denials of widespread unpaid overtime.

And they’re not alone. Just last week, a U.S. District Court approved a $650,000 settlement of a class-action lawsuit by Gannett call-center employees who worked overtime without pay. The suit was filed in July 2019 and had a class of 95 people. Gannett initially denied that they engaged in any unlawful or improper conduct, just as they are currently denying such behavior  toward their journalists.

The Guild launched an investigation into unpaid overtime after members tweeted about the practice and a top editor responded, “Every business exploits the young – it’s called gaining experience, and I don’t regret it one bit.” He later added, “Prove yourself and they’ll pay you.”

In a Sept. 17 email, NewsGuild President Jon Schleuss notified Gannett CEO Mike Reed that the Guild was launching an investigation into the practice, urged Reed to conduct his own investigation, end the culture of exploitation, and agree to the common-sense contract proposals advanced by journalists at Gannett.

The Guild created a form for journalists (union and not-yet unionized) to let union leaders know if they’ve been illegally exploited by Gannett. “The comments so far are deeply disturbing and show how widespread this practice is,” Schleuss said.

After reading Reed’s response, more than a few NewsGuild members pointed out the irony of the head of a news organization undermining the credibility of the journalists he employs.

Sammy Roth, a reporter at the Los Angeles Times, tweeted, “If your major selling point as a company is the trustworthiness of your journalism, seems like a terrible idea to actively undermine that.”

And Rebekah Sanders, a consumer protection reporter at the Arizona Republic and chair of the Az Republic Guild, tweeted, “Stunning @Gannett would call employees’ truthful recounting of illegal behavior ‘general frustration’ or a ‘personal belief.’ If Reed had listened to our members, read employees’ tweets or reviewed past payouts Gannett has made after OT complaints, he might realize the truth…

“If Reed still believes @Gannett ‘will never ask, expect or tolerate unpaid overtime’ and a company culture of unpaid OT is ‘exaggerated,’ maybe he should look at the discussion ex-Gannett employees are having right now.”

After her initial article about the controversy last week for CNN Business, reporter Kerry Flynn wrote in the Reliable Sources newsletter that “many current and former Gannett employees have since texted me sharing their personal experiences with unpaid overtime, some saying the practice is pervasive and prompted them to leave or want to leave the company…”

Quite a few journalists tweeted about their experiences with unpaid overtime at Gannett.

“We are committed to ending the practice of unpaid overtime, which is a major reason so many talented journalists – especially women and people of color – have left the industry,” Schleuss said. “It’s time for Mike Reed to own the problems and commit to fixing them. It’s time for Gannett to stop fighting its own journalists.”

If you’re a Gannett employee who hasn’t been paid for overtime, Schleuss advises you to submit it and talk to your steward, unit and local leadership about what else you can do. You should also complete the questionnaire.

Photo at top: An image of the conversation among employees about unpaid overtime that was referenced in Rebekah Sanders’ tweet.