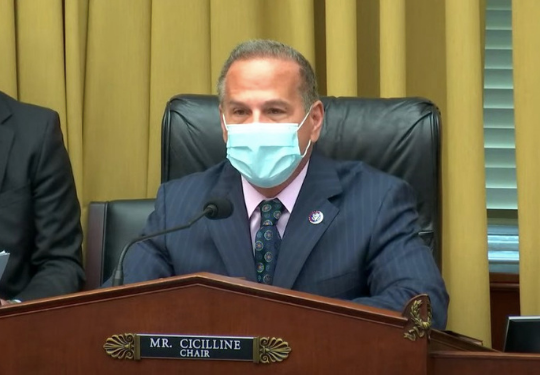 In a hearing on saving “the free and diverse press,” NewsGuild president urges lawmakers to protect local news and jobs

“We look forward to a news ecosystem that prioritizes local coverage, jobs and our communities over unsustainable business practices,” Schleuss told the House Judiciary Committee’s subcommittee on Antitrust, Commercial and Administrative Law.

Rep. David Cicilline (D-RI), chair of the subcommittee, introduced legislation Wednesday that would allow news publishers and broadcasters to bargain as a group with Google and Facebook for linking to their content. The Journalism Competition and Preservation Act, or JPCA, also would give a four-year exemption from antitrust rules so news organizations large and small can work together.

Schleuss said he supports the new bill but would like to see more news worker job protections.

“Google and Facebook benefit from the stories produced by journalists and they use the traffic they get to sell ads, capturing a majority of the digital ad revenue,” Schleuss said. “The companies should pay their fair share when benefiting from the sharing of news content.”

The National Association of Broadcasters issued a statement Thursday supporting the legislation, saying it “would afford news producers the ability to negotiate a fair return for their local journalism that serves America’s communities.”

Schleuss, however, made several recommendations for additions to the bill. He also criticized the “predatory” practices of hedge funds and private equity firms, which increasingly control U.S. newspaper chains, saying they slash jobs, load news companies with debt, and “appear to be milking elderly readers who are paying higher prices for thinner newspapers.”

He summed up the local news crisis this way: “The revenue loss resulting from the platforms’ dominant market position has, of course, left many newspapers in a weakened financial condition. That has, in turn, left them vulnerable to takeover by predatory financial actors who, rather than revitalizing the papers, have acquired papers, usually in leveraged buyouts, and then stripped them of their assets and staff, leaving them as skeletons of themselves.”

Schleuss made several suggested revisions to the bill, including:

“Because many American news companies put shareholders and investors above our communities, we need requirements to make sure any additional revenue is tied to new jobs to invest in local news,” Schleuss said.

He said Australia’s recent legislation that addresses “bargaining power imbalances” between news organizations and Google and Facebook falls short because it doesn’t require news companies to reinvest in their workforce, “nor does it redistribute funds to smaller papers or fund news deserts.”

Schleuss gave his remarks during a hearing titled “Saving the Free and Diverse Press,” held as part of the committee’s ongoing inquiry into “Reviving Competition.” The first hearing in the series took part in late February, when the committee looked at the “gatekeeper power” of social media’s “dominant platforms,” including Facebook, Twitter and YouTube.

“The concentration of ownership of news organizations among a shrinking number of chains and hedge funds has led chains to put debt servicing ahead of saving news jobs and providing accountability to the communities they serve,” the NewsGuild said in a statement before the hearing.

Also testifying at Friday’s hearing were Brad Smith, president of Microsoft; Glenn Greenwald, who reported the first stories based on Edward Snowden’s leaked government documents and founder of The Intercept; David Chavern, president and CEO of the News Media Alliance; and Emily Barr, president and CEO of the Graham Media Group on behalf of the National Association of Broadcasters, and the Television Board chair of the National Association of Broadcasters.

Cicilline opened the hearing with a scathing summary of the dire state of local news, quoting Schleuss: “We are truly facing an extinction level of local news.”

Facebook and Google capture nearly all of the online advertising in the United State, Cicilline said, and “enjoy substantial profit margin,” and said the Journalism Competition and Preservation Act would create “an equal playing field”

He said the proposed legislation doesn’t go far enough to create fair competition online, but added “we must do something in the short term to save journalism.”

In his testimony, Greenwald also criticized Twitter and Facebook “suppressing” the New York Post’s reporting on Biden just before the election, and said he agreed with other speakers supporting the bill, but is concerned that the new legislation would “empower” news media to engage in censorship. Cicilline said the bill addresses some of the issues Greenwald raised and that the four years of protections for news media would also extend to the smallest newspapers.

‘Our community does not know itself’

Committee vice chair Rep. Joe Neguse (D-CO) asked Schleuss asked about Alden Global Capital, which implemented the Denver Post’s recent draconian staff cuts, and asked how lawmakers could respond. “The goal for a lot of these hedge funds is to get profits up to a level that is not sustainable,” Schleuss said, noting that Alden is about to take over Tribune Publishing.

Schleuss said lawmakers should consider what potential mergers would do to local coverage and said future legislation could provide financial incentives for hedge funds to sell their papers to local nonprofits.

Smith, of Microsoft, said Microsoft supports the bill, and quoted “a citizen in Florida” who described the aftermath of his town losing its local newspaper: ”Our community does not know itself.”

By the end, there was one area of bipartisan consensus: both Democrats and Republicans agreed the bill needs to ensure that small publications benefit equally, and that it should not simply help the major media corporations. Cicilline indicated there will be more to come.

As he said when closing the hearing, “This is a temporary solution for an urgent problem.”

After the hearing, Schleuss described it as “a very good discussion. I was very excited to see strong bipartisan support for local news jobs.”

As a union leader, he said he found it comical that the discussion was “focused on media companies wanting to correct that imbalance of power by collectively bargaining with the platforms. I’d love to see them bargain more with our workers.”

The Guild he said, will continue to put workers first in any legislation it supports. “We can’t rely on private equity and hedge funds to actually invest in journalism.”