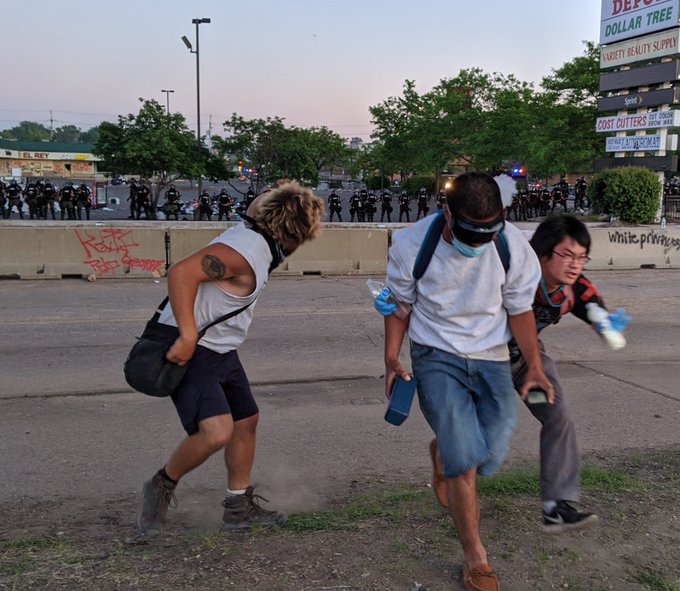 June 9, 2020 – The Communications Workers of America and The NewsGuild-CWA joined a class-action lawsuit on Monday against Minneapolis and Minnesota law enforcement agencies, accusing them of deliberately targeting, assaulting, and arresting journalists as they covered protests following the police killing of George Floyd. The lawsuit, initiated by the ACLU-MN, was filed in U.S. District Court in Minnesota on June 3.

“Once again, journalists, including NewsGuild-CWA members, are being targeted for doing their jobs,” said CWA President Chris Shelton. “When power is being abused, exposing those abuses of power is absolutely necessary. Protecting the health and safety of our members is fundamental for our union, and protecting our constitutional rights to freedom of speech and a free press is essential for all of us.”

“Journalists are covering the two largest stories of our lifetime and sometimes it can’t be covered from a ‘safe distance,’” Schleuss said. “But they should never be singled out for abuse, arrest or intimidation just because they are doing their jobs and serving a crucial role in our democracy.”

The complaint says, “Over the past week, the Minneapolis Police and the Minnesota State Patrol have tear-gassed, pepper-sprayed, shot in the face with rubber bullets, arrested without cause, and threatened journalists at gunpoint, all after these journalists identified themselves and were otherwise clearly engaged in their reporting duties. These are not isolated incidents.”

A spreadsheet compiled by the U.S. Press Freedom Tracker lists close to 300 incidents of arrests and assaults against journalists at protests in Minnesota and elsewhere. About two dozen NewsGuild-CWA members have been injured or detained over the last two weeks.

Chris Serres, a reporter for the Minneapolis Star Tribune, tweeted on May 31, “Regarding police behavior last night, I was twice ordered at gunpoint by Minneapolis police to hit the ground, warned that if I moved ‘an inch’ I’d be shot. This after being teargassed and hit in groin area by rubber bullet. Waiving (sic) a Star Tribune press badge made no difference.”

Regarding police behavior last night, I was twice ordered at gunpoint by Minneapolis police to hit the ground, warned that if I moved "an inch" I'd be shot. This after being teargassed and hit in groin area by rubber bullet. Waiving a Star Tribune press badge made no difference. pic.twitter.com/pfBm7ubzOg

Molly Hennessy-Fiske, a Los Angeles Times reporter, posted a video on May 30 describing how she was struck in the leg at close range with a tear gas canister shot by Minnesota State Patrol after identifying herself as a journalist. A week later, she tweeted pictures of her bruises.

This was taken today. It’s been nearly a week. I’ve worked every day, injured, because you cannot stop the free press protected in our Constutution by shooting us. #JournalismIsNotACrime @MnDPS_MSP @MnDPS_DPS pic.twitter.com/3I3Wlj6dPf

“Journalists are the watchdogs of our society,” Schleuss said. “The NewsGuild and CWA will continue to stand up and fight for the reporting rights of every journalist in this country.”

“Across the country, journalists have been working at a dizzying pace for months to cover the COVID-19 pandemic and the social unrest after the killing of George Floyd,” he said. “This, while more than 36,000 have faced layoffs, furloughs or pay cuts from COVID-19’s effect on our economy. A free press is a foundation of our democracy.”

Despite repeated apologies by Gov. Tim Walz and Mayor Jacob Frey, the improper conduct by Minnesota and Minneapolis law enforcement “constitutes a pattern of unreasonable force and unlawful seizures under the Fourth Amendment,” the suit says. “And it deprives liberty without a modicum of due process protected by the Fourteenth Amendment.”

“It violates the sacrosanct right to freedom of speech and freedom of the press that form the linchpin of a free society.”

The suit seeks to restrain law enforcement from “further violence and unconstitutional conduct” and unspecified damages.