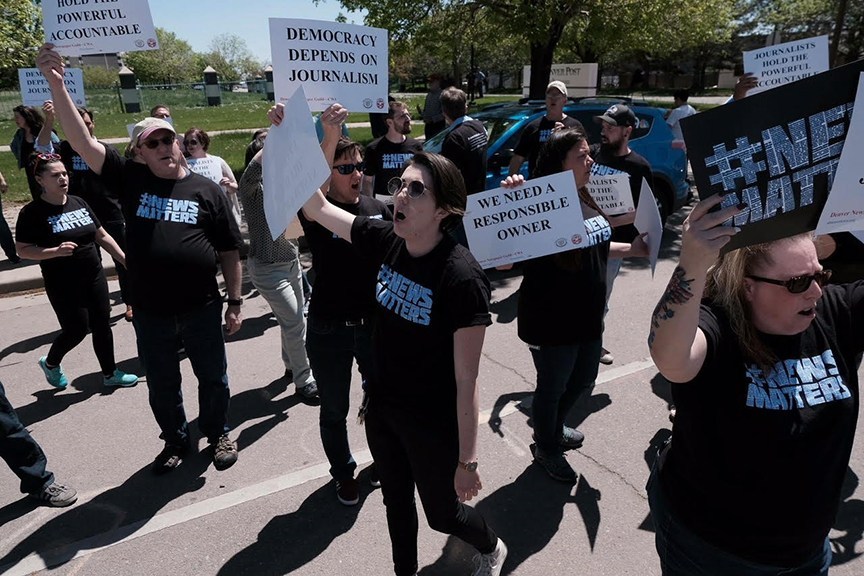 This is a reprint of an article that appeared on www.dfmworkers.org on March 19, 2019.

March 19, 2019 – One year ago, a handful of Denver Post current and former staff shocked the paper’s readers, their news chain’s owners and the nation. After yet another round of devastating layoffs — this one leaving its newsroom slashed by a third — they quietly wrote, edited and designed a six-page section that appeared in the Sunday paper on April 8.

Together, the 10 op-ed pieces exposed the paper’s owners, New York-based vulture hedge fund Alden Global Capital, explaining to readers that Alden was knowingly dismantling the Post — and in turn its ability to cover local news — by decimating its staff and selling off its real estate.

“The Denver Post is in open revolt against its owner,” a front-page New York Times story stated. “Angry and frustrated journalists at the 125-year-old newspaper took the extraordinary step this weekend of publicly blasting its New York-based hedge-fund owner and making the case for its own survival.”

Since that day, a number of Post employees who took part in — or weathered — what became known as the Denver Rebellion have left the paper.

Others have valiantly held on, determined to produce the best journalism they can under dire circumstances.

“It was bold and it was loud and it needed to be said,” says Noelle Phillips, who supervises the Post’s breaking news team. “Looking back, I’m still glad that the Post’s editorial board did that.”

The uprising garnered headlines in the Washington Post, The Associated Press, NPR, Salon, Forbes, The Columbia Journalism Review and many more news outlets. It also led to some surprising events, including previously unheard-of sit-downs with upper management in a series of dog-and-pony shows meant to address employee concerns but doing little to assuage them. In fact, the few assurances made in those meetings — that the downsizing Band-aid had been “ripped off,” that the worst was over, that there would be no more layoffs — turned out to be false. Although there haven’t been any additional layoffs at The Denver Post, staff cuts recently were announced at the Alden-owned St. Paul Pioneer Press and The Boulder Daily Camera — the Boulder announcement coming right after employees attended their editor’s funeral.

“It was a cry for help to the community and it should be heard, not just in Denver.”

Chuck Plunkett was the Post’s editorial page editor and the man who put the section together.

“I knew it was a long shot,” Plunkett says today. “I didn’t believe that the owners cared about journalism … But I am the kind of guy who likes to work things out with people.”

After the editorials caused a firestorm, Plunkett, 52, resigned when management made it clear his continued reporting on the newspaper’s owners would not be welcome. He now teaches at University of Colorado Boulder and runs its News Corps program.

“I would have hoped we’d work this out in a kind of team spirit kind of way, that they’d say: ‘We’re listening to you,’” Plunkett says. “That didn’t happen.”

On a personal level, he says it’s been a tough year. “I always wanted to be the editorial page editor, and then I didn’t get to do it very long. That level of a loss, it’s like someone you love passing away. But I have a great job now, and I get to work with young journalists. “

Soon after Plunkett’s departure, the Boulder Daily Camera’s Dave Krieger was fired after he published an editorial about Alden on his blog that had been rejected by Al Manzi, publisher of the paper.

By May, journalists from across the country took to the streets — of Denver, the San Francisco Bay Area and in front of Alden’s Manhattan headquarters.

“The shame is theirs. But down here on the streets, the pride is ours.”

Powerful words. A year later, what has changed?

Alden is still in control of the Digital First Media chain, and none of the locals raising funds to buy the Denver Post has pulled it off. Alden is even emboldened to try to take over its competitor, Gannett, and has nominated its own board slate to be voted on at Gannett’s annual meeting. For all of the widespread, negative press coverage, Alden hasn’t stopped doing what it does.

Dan Kennedy, associate professor at Northeastern University’s School of Journalism and author of the Media Nation blog, says that a year later the Denver Rebellion “doesn’t seem to have meant much, but maybe it helped educate the public about the dangers of hedge funds owning newspapers.”

Still, lest you believe the rebellion was in vain, here’s a reminder that there are cracks in Alden’s façade.

After hiring a “spin” firm to try to clean up its reputation, Digital First Media has officially changed its tarnished name to MediaNews Group. The hedge fund and its founders, Heath Freeman and Randall Smith, are rarely mentioned in news reports without a line or two describing their reputation for destroying newspapers.

Media critics are taking note of Alden’s similarly rapacious behavior when it takes over other businesses, such as Payless ShoeSource and Fred’s Pharmacies. Even the financial press, normally mum when it comes to corporate ethics, continues to mention Alden’s chop-shop dismantling of its newspapers and has speculated that despite Alden’s blustering, it doesn’t actually have the money to buy Gannett.

“I feel really good about what ultimately happened,” Plunkett says. “Yes, it would have been better if Alden came along and said, ‘You know what, maybe we are overdoing the cuts.’ But what happened was we changed the conversation. The people who subscribed to the Denver Post didn’t know why the cuts kept coming. That’s the message that got out. People are thinking about the importance of local news, and there’s a healthy community discussion to help solve the problem.”

After his departure from the Post, Plunkett says the reporters still there have bravely continued the fight to save local news in Denver.

“I sure hope that the folks who are in the newsroom doing the hard work feel like it was worth doing. That the Denver Rebellion means something,” he says. “I hope a year later that The Denver Post still gives the folks who are in the trenches motivation. What those folks are doing is so important. I know how hard they’re working, and I want the community see them succeeding so bad.”

Earlier this year, as Alden executives began their attempted takeover of the Gannett chain, “you saw headlines like ‘America’s most hated newspaper owner makes bid for Gannett.’ Nobody knew who they were before!” Plunkett says. “You even saw (Senate Minority Leader) Chuck Schumer raising the specter of anti-trust violations, the harm it would do to the country.

“Yes, it’s true it’s not just Alden laying people off. Sometimes it can feel like very little is working. We shouldn’t lose sight of the fact that we had a lot of successes this last year, and it makes me continue to feel optimistic about the future of our profession.”

He says the rebellion may even be why the Post has managed to keep staffing levels stable in the year since its last, brutal round of layoffs.

Phillips says the Post has seen more reporter defections since the rebellion. The newsroom may be small, she says, but it’s vibrant. “We’ve hired some good, energetic reporters,” she says. “They’re happy to be here. There’s a fresh energy that’s here.”

The results of the rebellion are still rippling across Colorado, she adds. “I appreciate the Colorado Media Project trying to find an answer for the funding, the business model,” Phillips says. “I want people to understand they need to pay for the news … And I still feel like Alden and DFM could treat us better, give us a raise.”

“It was bold and it was loud and it needed to be said.”

The Harvard Nieman Lab’s Ken Doctor also believes the rebellion spawned community concern about local news, an industry desperate for solutions. “You’re seeing a response, more this year than last year, of people recognizing things like ‘news deserts.’ There has been lots of discussion among foundations, and in Denver there have been discussions about how to pay for journalism.”

The main takeaway, he said, is that “the old order is declining rapidly; the new order is still inchoate.”

He credits the Post’s reporters for helping to put the challenges faced by local news on the nation’s radar. “I think they can take a lot of satisfaction in doing their part to elevate a national issue. There’s a heightened sense of emergency. They contributed to it by publishing that section, by getting out in the street and by having discussions with civic leaders.”

Most important of all, the Denver Rebellion made Americans understand that their local newspaper is under siege — and that it’s worth fighting for.

Make no mistake, the paradigm has shifted. There is now light shining on Alden’s darkness. This secretive company, which for years was siphoning millions in record profits from its papers for the personal gain of its founders, can no longer do so in the shadows.

As the employees who protested in New York and Denver showed, both they and their communities will not stand quietly by as local newspapers are shuttered to line Freeman’s and Smith’s pockets.

Today, a nation is watching Alden’s every move.