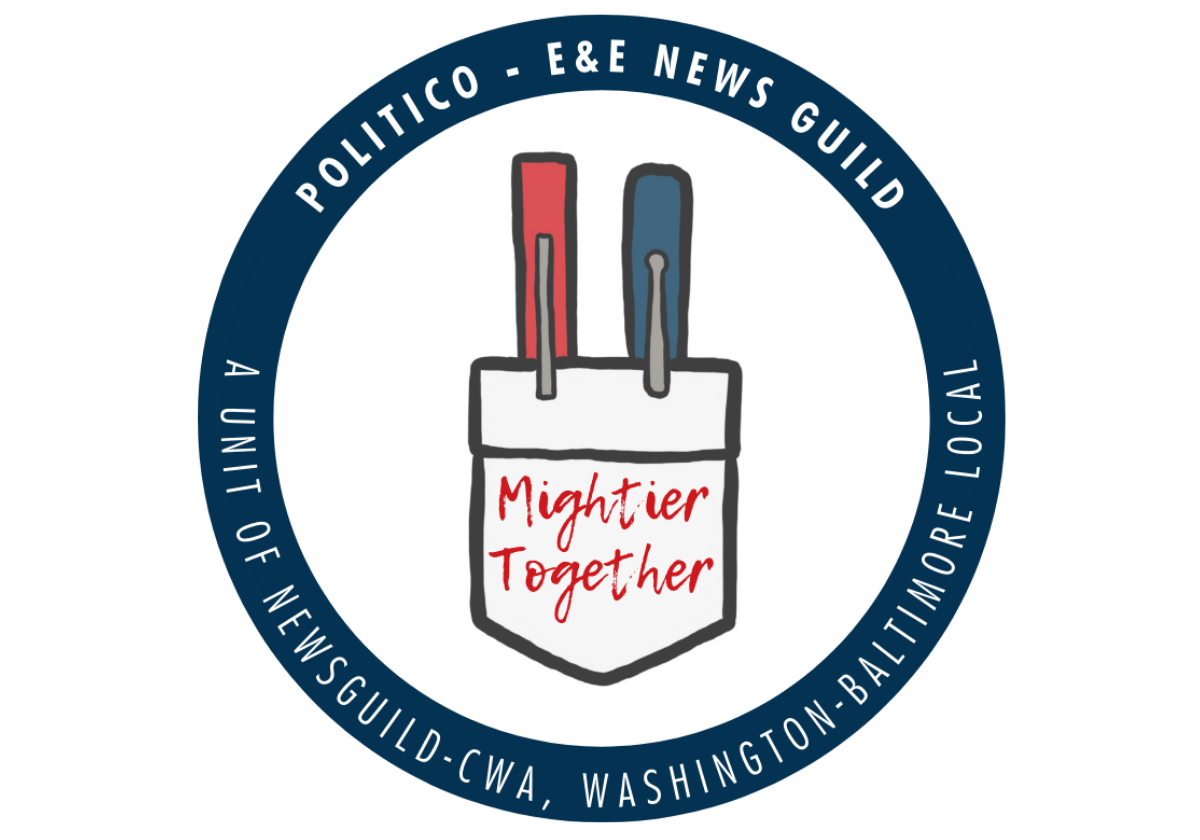 Workers say they are uniting “in the spirit of love for journalism, respect for our colleagues and hope for this company’s future.”

The staff of Politico and E&E News announced Friday that they are unionizing as part of The NewsGuild-CWA.

“The award-winning newsroom staff of POLITICO and E&E News took a major step Friday toward giving a voice in the workplace to more than 250 journalists who dedicate each day to informing Americans on the inner workings of their democratic system,” they said in a press release.

More than 80 percent of the reporters, producers, copy editors, page designers, audio engineers, videographers and others have signed cards and a mission statement indicating their intent to form The PEN Guild, which will be part of Washington-Baltimore News Guild Local 32035. “PEN Guild” stands for Politico and E&E News Guild.

Eugene Daniels, Politico Playbook co-author and White House correspondent, said, “There’s nothing more important than having more people at the table that are in staff, more diverse voices from staff at the table earlier in the process, and that’s exactly what we’re hoping to do with this union.”

“We want to establish certainty and codify all of the things that we like about E&E into this new world order,” said reporter Emma Dumain.

“E&E News is the most family-friendly newsroom I’ve ever worked in,” she said. “I feel supported by my editors as a working parent and that support helps me be a better journalist.” She wants to make sure everyone has the same support, no matter who their editors are or who owns the company.

The PEN Guild formally requested that the new owners of Politico and E&E News — Axel Springer — voluntarily recognize the union, and submitted cards from newsroom employees to the National Labor Review Board calling for an election if management does not do so.

Granting voluntary recognition “would preempt drama, timewasting and expense; build a lasting and mutually productive relationship; and help us all construct a strong newsroom we can be proud of,” they wrote in a letter to management. “We can withdraw our petition once Axel Springer voluntarily recognizes our union.”

Leah Nylen, who has been involved in four company sales over 15 years, said that each one led to changes in benefits, bosses and sometimes layoffs. The day the Politico sale to Axel Springer closed, management informed workers that because of an oversight their 401K would be frozen for the rest of 2021.

“If employees had had a seat at the table, I doubt something as important as our retirement and healthcare savings would have been missed,” Nylen said.

PEN Guild’s support includes members from every department, reporting team and medium within the newsroom, and includes recent college graduates to long-tenured newsroom stalwarts with decades of journalism experience. They all believe that the employees of Politico and E&E News deserve to have a voice in decisions that affect them, they said.

Workers are seeking equitable pay, a diverse and inclusive workplace and job protections for everyone — which they believe will enable them to do their best work.

“Great journalism is the result of passionate and hard-working journalists: the reporters who hold elected officials accountable and explain the inner workings of government agencies; the graphic designers and data teams who illuminate their words; the producers and copy editors who fact-check their work and keep our sites running smoothly; and so many others,” they said.

“We take pride in this work and the acclaim it has won for our publications, once-scrappy upstarts that now go head-to-head with centuries-old newspapers. But these achievements have not resulted in just conditions for everyone, and not all of us enjoy the same protections and perks.

“In the spirit of love for journalism, respect for our colleagues and hope for this company’s future, we request that Robert Albritton and management voluntarily recognize our joint union — a unit of the Washington-Baltimore News Guild, part of the Communications Workers of America — and agree to negotiate the terms of our employment.”