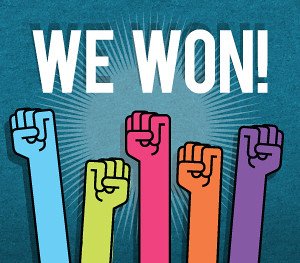 The SPLC Union Organizing Committee is excited to announce that its effort to unionize the Southern Poverty Law Center (SPLC) has prevailed. On December 16, 2019, the National Labor Relations Board conducted a ballot count. A majority of staff across 11 offices in five states and Washington D.C. voted in favor of representation by the Washington-Baltimore News Guild. The SPLC Union won the election by an overwhelming majority, 142 to 45.

Below is a statement by the SPLC Union Organizing Committee:

“We celebrate this momentous victory, which comes after nearly nine months of tireless organizing by a diverse coalition of staff in varying positions, from all departments eligible for union representation, and in every office – who are committed to the values and principles upon which this union organizing drive was founded. The committee engaged colleagues around the Center and garnered the support of a supermajority of staff, who filed a union election petition with the National Labor Relations Board on November 8, 2019. Workers from across the Center helped us bring the overwhelming victory home with incredible voter turnout.

“This is a historic moment in the history of the Southern Poverty Law Center, and in the history of labor organizing in the Deep South.  We value the contributions of our colleagues at the Center, past and present, who laid the groundwork for our efforts.

“From the beginning of this union organizing drive, our values and principles have been clear:

“We look forward to working in the coming months to negotiate a collective bargaining contract that works for the benefit of all workers, regardless of race, color, religion, sex, sexual orientation, gender identity, physical ability, and national origin. Though we were disappointed in the response of SPLC’s senior leadership to our union organizing drive, we stand ready to work together with them during the contract negotiation process.”