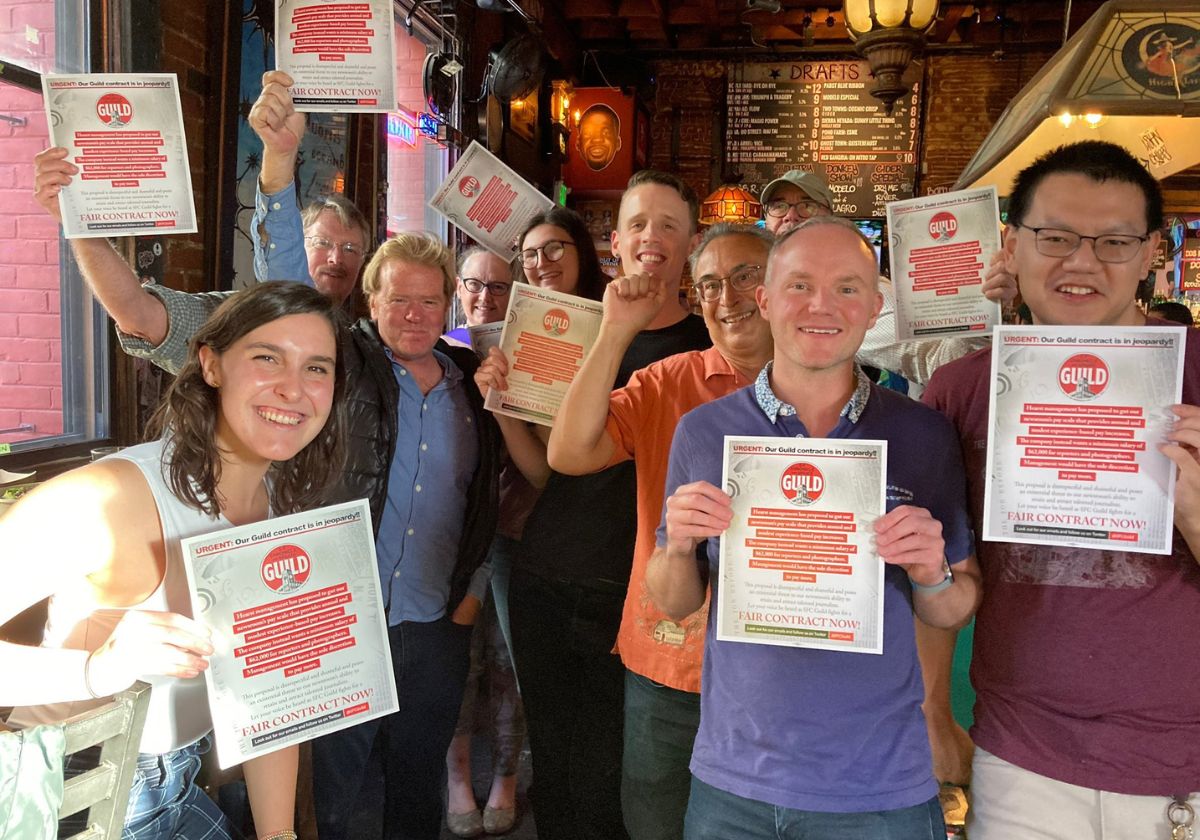 Here are just a few of the gut-wrenching testimonials:

María Méndez said, “It was my dream job to write about schools in Austin where I grew up and was the first in my family to graduate from college. As I wrote about public school funding and controversial bills, apartment rents soared. I thought, ‘I’ll wait it out with my family.’ … When I was offered another journalism job with $10,000 more than I was making it was really hard to say no, even though I had more education stories I wanted to tell.”

Former reporter @rebeccahmac worked a second job while working at the Statesman before leaving for a better-paying job. “I had two jobs. I was getting up at 4 a.m. as a curbside shopper for HEB. I knew I needed a second job just to have my ends meet.”

After @sarahradinasch‘s rent went up 30% she moved in with other journalists to afford rent: “You say you care about diversity. You say you value your staff, but I am not seeing that in one of the ways it matters most: you don’t pay us enough to live in the community we cover.”

Journalists hold the powerful to account and that applies to Gannett too. Gannett will be judged by the decisions they make and how they respond to the journalists who are the Austin American-Statesman.

Members of the San Francisco Chronicle Guild are fighting management antics while bargaining for a new contract. They found a nice spot for their contractually guaranteed Guild bulletin board after the company remodeled the newsroom, but management moved the board to a less visible spot.

If the company thought their tactics would go unnoticed, they were wrong. Culture critic Peter Hartlaub, who’s been a union member for 27 years, said he’s seen pettiness during bargaining before, but this goes on Mt. Rushmore.

When bosses remove flags and whine about it, you know you’re doing something right and building pressure.

When members of the Insider Union proposed higher salary floors, overtime pay, paid time off and guaranteed raises during bargaining, Insider’s reps dismissed them as “pie in the sky rainbows.”

So 172 union members emailed management to tell them why they need those things and more, but two days later, management’s counsel hadn’t read them.

Last week, workers made sure company reps would get their message. They turned the emails into eye-catching tweets that got more than 300 retweets. Then they hit “print,” and hand-delivered them, with some members watching on Zoom.

“We did not unionize to keep things the same and to have no say in these terms. We organized to help Insider get better every day,” they tweeted.

Members of PEN Guild pumped up their campaign for a first contract with a rally and get-together on Politico’s rooftop last week. The PEN Guild represents journalists at Politico and E&E News, which Politico owns. They’re fighting for just cause, paid overtime, better protections against harassment and discrimination and more.

The journalists of the Denver Post are asking for your help. Like so many of our journalist members, in the past two years they’ve entered COVID wards, inhaled tear gas at protests, run toward wildfires and asked hard questions of powerful people.

“Being a journalist requires a stubborn optimism that it’s all worth it,” tweeted Elise Schmelzer. “We know our work matters. But how long can wages be stagnant when inflation and rents are skyrocketing? Help us, show our execs we have your support.”

The Denver Guild is bargaining against the vulture hedge fund Alden Global Capital. Please sign their letter and stand with these journalists.

Seven Guild units at Tribune-owned publications are bargaining jointly for a first contract and they’re up against the vulture too.

As Julie Reynolds reports, since last year when Alden Global Capital took control of Tribune’s board, four newsrooms have closed, buyouts have decimated staffing, and fewer articles have been published – all while subscription rates skyrocketed. Between April and August, the Morning Call in Allentown, Pa., lost 23% of its staff.

The Tribune Guilds are challenging Alden’s business model and fighting for coverage their communities deserve. These workers need your support!

Please sign their petition and tell Alden just what you think.

NewsGuild members at The Maui News in Hawaii are standing up for a fair contract, despite management’s insulting proposals and illegal and offensive tactics. I met with them this month and was impressed by their determination.

The workforce has been slashed by 2/3 in recent years, way below what is necessary to produce the paper. And management’s proposals would allow them to slash work hours – a move that would dramatically reduce coverage – and cut our members’ pay by 20 to 25%.

Last week management refused to bargain after employees logged on to watch the proceedings via Zoom. Employees’ right to observe contract negotiations is protected by federal law. And open bargaining wins trust and better agreements, as many Guild members know.

Please stand with our folks in Maui and sign their petition.

America’s journalists want Congress to prioritize saving jobs and local journalism, not hedge funds. That’s what we’ve been saying for more than 550 days, and we said it again last week, after the Senate Judiciary Committee advanced the Journalism Competition and Preservation Act. The bill now heads to the Senate floor for a vote.

We applaud the bipartisan effort to address the local news crisis, but the JCPA must be improved to support local news and local news jobs rather than subsidizing the corporate giants that have been gutting newsrooms for profit. The bill would give news companies the right to engage in collective bargaining to negotiate money from Google and Facebook — but it does nothing to ensure that the money will go toward retaining and hiring journalists and strengthening local news coverage.

At the Judiciary Committee meeting, Sen. Alex Padilla (D-CA) cited concerns raised by NewsGuild local leaders representing newsrooms in California and elsewhere. “I believe that we need stronger language to ensure that the revenue from this bill goes to the workers that make journalism possible and is invested in the high-quality local journalism that those workers produce,” he said.

We will continue to work with members of Congress to make sure the final version of the bill supports local journalism, not hedge funds and greedy out-of-touch executives.

Delegates to the Guild’s 2022 Sector Conference voted to establish a virtual Nominating Conference to nominate NewsGuild officers. This change eliminates the need for delegates to travel to two separate conferences in the same year. Next year’s in-person Sector Conference will be held Friday and Saturday, July 7-8, in St. Louis, Mo., immediately preceding the 2023 CWA Convention.

We’ve got some great training sessions for Guild activists scheduled through the end of year, including a new steward training series set to on Wed with starting time west coast Guild members will appreciate. Upcoming events are listed on our calendar, with new events added frequently.