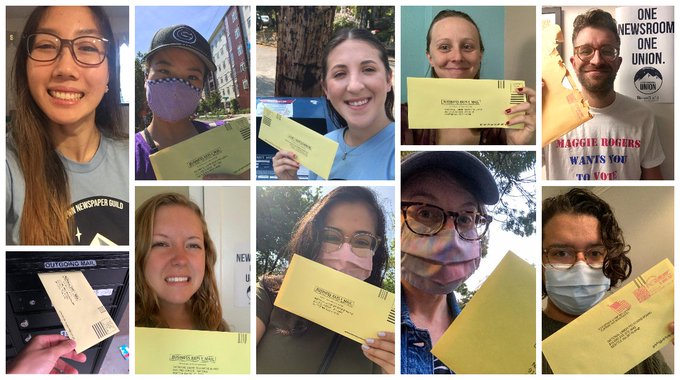 Sept. 28, 2020 – The digital journalists at The Seattle Times voted 10-0 to unionize in balloting that was tallied on Friday. They will join their print colleagues at the Times in the Pacific Northwest local of The NewsGuild-CWA.

“We’re thrilled to secure workplace protections for ourselves and join our colleagues in the Pacific Northwest Newspaper Guild,” said engagement editor Michelle Baruchman.

In a mission statement presented to management in May, the journalists wrote that they had been preparing to form a union for months, predating the global coronavirus pandemic.

“Increasing digital subscriptions will be key in sustaining The Seattle Times’ revenue growth, especially as we lead a pack of major metropolitan newspapers pivoting away from advertising revenue,” the statement said. “This digital-first growth isn’t possible without the know-how of our digital journalists.

“We’re joining our fellow journalists in the Pacific Northwest Newspaper Guild to continue creating innovative journalism without an arbitrary divide between print and digital roles,” she said.

In a May Twitter announcement of their union campaign, digital employees noted that more than 100 Seattle Times journalists were already members of the local and pointed out that they work side-by-side with them.

On June 2, the Seattle Times Company filed a claim with the NLRB challenging the digital journalists’ right to affiliate with the Guild. The NLRB rejected the company’s claim on Aug. 21. The Times appealed the ruling but the NLRB declined to review the appeal on Sept. 24. A representative of the board counted the ballots via video conferencing the next day.

The digital journalists’ organizing campaign is part of a recent surge in NewsGuild organizing drives around the country. Recent Pacific Northwest Newspaper Guild victories include The Idaho Statesman, The (Vancouver, Wash.) Columbian and Crosscut/KCTS 9.

Photo: Before the vote count, Seattle Times digital staffers tweeted photos of themselves mailing their ballots.