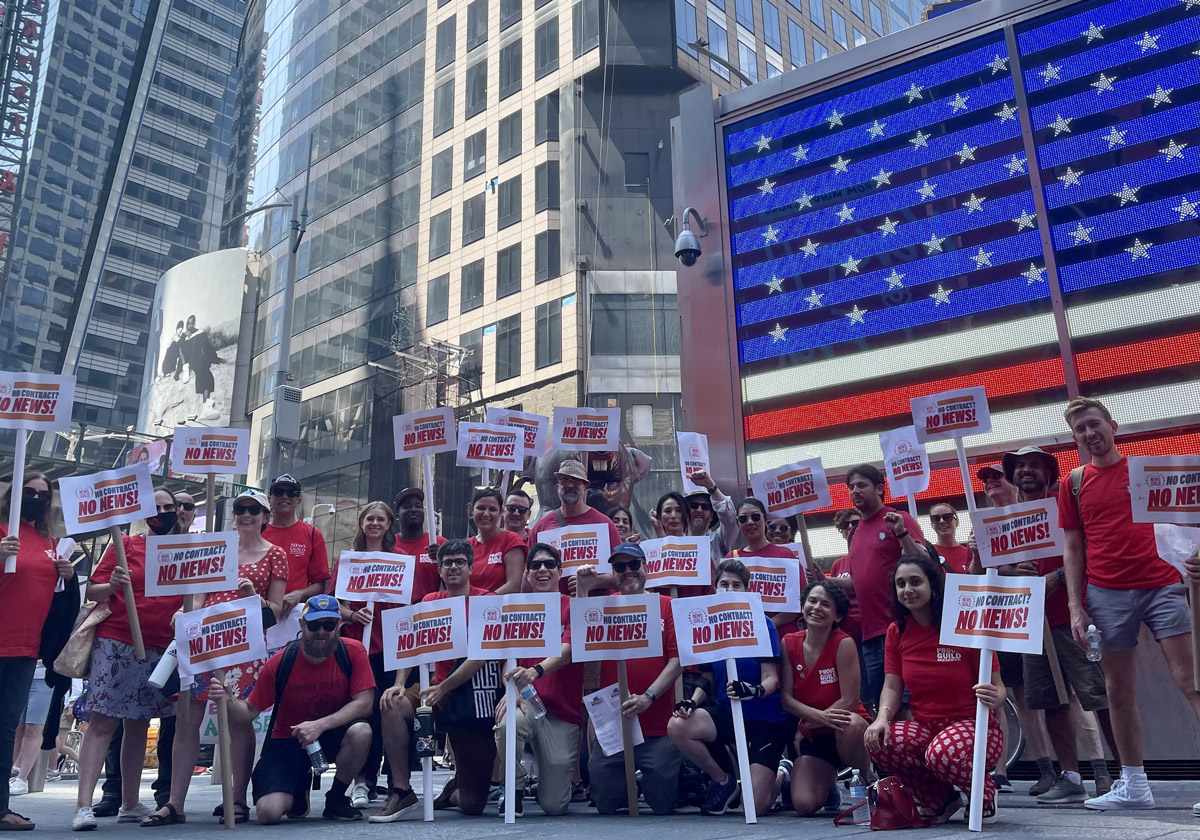 Nearly 300 journalists at Reuters, the global news agency, walked off the job today for 24 hours in protest of management’s slow-walking contract renewal negotiations, the first major labor action by journalists at the company in more than 30 years. Reuters journalists, photographers, videographers, copy editors, producers and technicians are represented by The NewsGuild of New York.

Journalists are walking out to protest management’s offer of a guaranteed annual wage increase of only 1%, which would effectively mean a pay cut given the soaring cost of living. The company’s profits are at record highs: since the end of 2017, the company’s cash from operating activities has totaled about $6.3 billion and its dividend has risen by nearly 29%. Yet management’s latest offer, in addition to the 1% guaranteed wage increase, also includes zero retroactive pay for the nearly two and a half years since its last general wage increase in March 2020. The miserly pay offer is particularly hard to swallow for journalists who have found themselves in the line of fire like never before in recent years, be it reporting on the front lines of the COVID-19 crisis, the war in Ukraine, or extreme climate events.

Meanwhile, the company’s majority owner and billionaire chairperson, David Thomson, 3rd Baron Thomson of Fleet, is one of the world’s richest people. His family’s wealth has increased by more than $17 billion since journalists last received a general wage increase in March 2020.

“For the past two years we have been risking our lives, putting our physical safety and health on the line reporting the news that makes Reuters the best news agency in the world,” said Julio-César Chávez, a video reporter at Reuters. “While we reporters are called away from our families in the middle of dinner, something we gladly do for the job, Reuters executives sit in the comfort of their home offices managing the profits we bring in for the company. I’m walking out today because our work is what powers the success of Reuters, and we deserve to be compensated adequately for it.”

Management has failed to even engage with journalists and used stalling tactics in renewing their collective bargaining agreement, which expired nearly 20 months ago, on December 14, 2020. Management has also refused to schedule a single bargaining date in August to continue moving negotiations forward. Journalists proposed 15 bargaining dates in August, all of which were rejected by management. On Monday, the NewsGuild filed an Unfair Labor Practice charge with the National Labor Relations Board in response.

The walkout will come on the day of Reuters’ quarterly earnings call, where the company is expected to announce yet another set of strong profits. The company has lavished shareholders with billions of dollars in stock buybacks and dividends since the pandemic began.

The action is the latest in a series of increasingly tough actions journalists and other workers in media have taken in recent years to press management for a fair share, whether it be New Yorker workers picketing Anna Wintour’s house or WIRED reporters threatening to walk out on Amazon’s Prime Day.

Journalists are expected to walk out and hold rallies at seven Reuters bureau offices: Washington, D.C., New York, San Francisco, Los Angeles, Houston, Chicago, and Boston. Scores of Reuters journalists are expected to join the actions, which will take place throughout the morning and afternoon. In New York City, Reuters journalists will be picketing across the Reuters News U.S. headquarters at 3 Times Square (next to the U.S. Armed Forces Recruiting Station) from 11 a.m. to 1 p.m. ET.

“I’ve worked for Reuters for nearly 32 years, and for most of that time I got a pay hike every year – until 2021, when many of us got no raise while the company was racking up record profits. This year, the raises we’ve seen were puny taking that and inflation into account and a slap in the face after many of us covered or edited stories like COVID-19, the US. presidential election and the attack on the U.S. Capitol. The 1% raise being offered by the company in contract talks pours salt on the wound,” said Jonathan Oatis, Desk Editor, Global News Desk.

Thank you @TheNakedCowboy for laying down an original track and the support today!