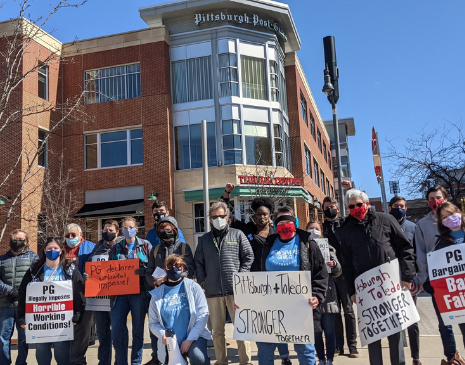 NewsGuild members at the Pittsburgh Post-Gazette and the Toledo Blade held solidarity rallies on Friday to deliver a message to their common owner, Block Communications, Inc: We’re taking a stand against your attempts to bust our unions, eliminate editorial independence, and destroy the two publications.

“We’re going to keep fighting until we get justice in the workplace,” said Nolan Rosenkrans a Blade reporter and president of the Toledo NewsGuild.

The Toledo NewsGuild announced it will hold a community meeting on April 12 to rally residents to help save local journalism.

Since January, Toledo Blade management has:

“We only want the paper to be great. We want BCI to respect the community,” said Lacretia Wimbley, a breaking news reporter and president of the Newspaper Guild of Pittsburgh. “We can’t get there when management shuts us out and refuses to negotiate in good faith with us.”

“Despite these attacks, NewsGuild members are standing firm,” workers said in a statement. “We won’t back down from these attempts to silence and intimidate us.

“We know that many in the community support our cause, and we call on them to join with us to save local journalism.”