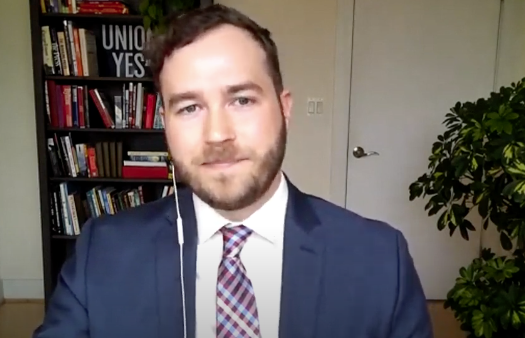 I was honored to testify before a House subcommittee on behalf of our members on March 12 about the extinction-level threat facing local news. I told members of the House Antitrust Subcommittee that in the last 16 years, 2,100 U.S. newsrooms have shut down. And there are half as many newspaper journalists working today as there were a decade ago.

That’s 36,000 journalists no longer working in cities and towns across the country. Not covering city council meetings. Not covering school boards. Not providing their communities a voice.

The takeover of the news business by hedge funds who refuse to invest in local news is leaving communities with “ghost newspapers” or no news coverage at all. And that’s a threat to democracy.

I told legislators that any efforts to provide aid to publishers must require the funds to be used to create jobs in journalism. Without that, we won’t have accountability for how aid is used. We also need regulations to limit the role of hedge funds in our industry. And public policy should incentivize big chains to sell news outlets to local owners and should support more nonprofit news outlets.

You can read my 5-minute oral testimony here, my written submission here, and you can watch the full hearing here. We must stand together to protect our jobs and our publications for our communities.

Wednesday, March 24 is Women’s Equal Pay Day, which symbolizes how long, on average, women must work in 2021 to catch up to the earnings of white men in 2020. Please join the Guild as we mark the day by participating in a Twitter storm at 2 p.m. EST (11 a.m. PT; 12 p.m. MT; and 1 p.m. CT) on Thursday. Click here for sample tweets and graphics.

Hartford Courant Guild’s campaign to Save Our Courant got a boost Thursday when a committee of the Connecticut state legislature heard testimony about the value of The Hartford Courant to the community and the threat that Alden Global Capital poses to it.

The state legislature’s Insurance and Real Estate Committee is considering a bill that would prevent The Courant’s present or future owners from taking on debt or issuing dividends that are not “in the public interest.” In other words, it would reassert The Courant as belonging to the community, not to faraway corporate owners like Alden Global Capital, which is trying to buy The Courant and other Tribune-owned publications.

In written testimony, Courant reporter and chair of The Courant Guild Rebecca Lurye explained why it matters: “I’m writing because America’s longest continuously published newspaper is under attack, its survival threatened by far-off corporate leaders who are diminishing the vital journalism we produce in their pursuit of the next penny,” she wrote. “If this hedge fund follows the playbook it has used at numerous other newspapers around the country, The Courant will soon be a shell of what it is now.”

“We believe ample community support exists to liberate The Courant from a hedge fund content to let it die,” Lurye said. “We urge the legislature to do anything and everything in its power to protect and preserve this institution.”

After nearly a year-and-a-half of bargaining for a first contract for digital employees with little progress, workers have had enough! “We came in thinking negotiations was going to be a back-and-forth, and that’s not what we’ve found,” said McKenna Moore, an audience editor and reporter and Fortune Union’s 1st vice chair. “We’re frankly done asking nicely… So today we’re walking out and withholding our labor for 24 hours.”

Among the issues in contention are diversity, salary transparency, pay equity and a performance evaluation system based on production quotas and traffic metrics that management implemented unilaterally, in violation of labor law.

Workers withheld their labor for 24 hours to remind management what their work is worth.

Members of IAPE1096, the NewsGuild local that represents workers at the Wall Street Journal and other Dow Jones publications, hit back at the company, which refused to bargain over the impact of COVID-19 on working conditions.

Members posted photos online, showing how much they’ve spent on their work-from-home setup and demanding more than a $150 stipend management gave them to work from home.

The local union also filed charges with the National Labor Relations Board.

BCI bargained in bad faith for more than three years before illegally declaring an impasse in contract negotiations and unilaterally imposing new working conditions at the Post-Gazette; they blocked coverage by a Black reporter of stories related to Black Lives Matter protests; they laid off five Blade employees and denied them the full compensation they are owed; they downplayed the Jan. 6 insurrection by instructing editors not to identify the violent mob as Trump supporters, and they continue to cut coverage to the bone while paying their union-busting law firms millions.

Nonprofits have been unionizing with the Guild at a fast pace in the last few weeks.

Staffers at RAICES TEXAS, the largest immigration non-profit in the state, announced Wednesday they are forming RAICES Workers Union as part of Guild. They will become a unit of the Washington-Baltimore Local.

Colorado’s legislative aides, campaign workers and organizers announced March 9 that they are forming the Political Workers Guild of Colorado to advocate for better pay and benefits for themselves and for all Coloradoans. They will become part of the Denver Local 37074. It is the first political workers union in the country that encompasses legislative staff, political organizers, and campaign workers.

ACLU MO United won voluntary recognition from management of the organization on March 8 and became part of the Guild’s United Media Guild Local 36047.

And the Minnesota Council of Nonprofits Union announced March 12 that they are joining the Minnesota Newspaper & Communications Guild.

The journalists of the Longview Daily News in Washington state asked Lee Enterprises, the paper’s parent company to voluntarily recognize the Longview NewsGuild on Thursday. A majority of staffers have signed cards seeking representation by the Pacific Northwest local of The NewsGuild-CWA.

As part of our effort to roll out NewsGuild Strong, we’ve put together a calendar of trainings for members. We’ll continue to add to the calendar and build it out for the entire year. Sign up with your colleagues!

I’m excited to announce that we’ve brought on Nick Bedell, who starts today as our new Administrative Director. Nick has years of experience knitting together organizing and bargaining to build up rank-and-file members. Most recently he was with the Transport Workers Union of America as their director of campaigns, where he oversaw the organizing and first contract fights of bikeshare workers in nine cities and organized rideshare workers in California, among many other campaigns. Before that he helped strengthen TWU Local 100 by training up hundreds of stewards in New York City. Welcome aboard, Nick!

And finally, with Alden Global Capital trying to buy Tribune Publishing, NewsGuild members are looking for philanthropists who are committed to journalism to purchase their papers instead. In “Being owned by a billionaire is a struggling newsroom’s dream. But it can turn into a nightmare,” CNN Business’ Kerry Flynn looks at the potential – and the pitfalls – of news outlets that are owned by the superrich.