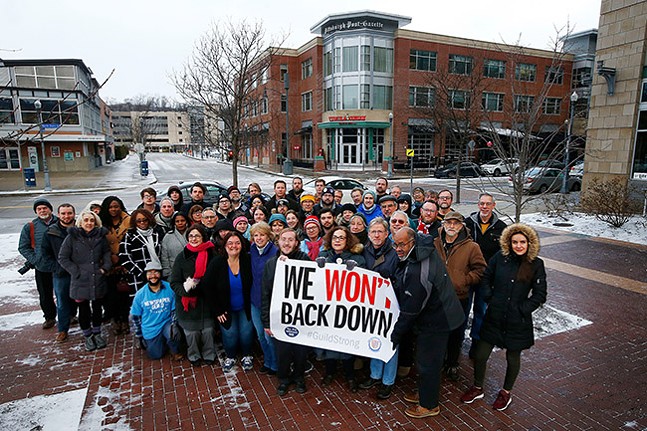 Jan. 2, 2020 – The Newspaper Guild of Pittsburgh has won a grievance protesting the Post-Gazette’s failure to pay for healthcare premium increases for the past two years, the local announced Dec. 30.

Arbitrator Jay Nadelbach ruled that the company’s failure to maintain the benefits violated the parties’ collective bargaining agreement. He instructed management to pay the amount necessary to maintain the benefit levels outlined in the contract and to compensate employees for any out-of-pocket expenses they incurred as a result of the company’s refusal to pay the premiums.

“As you know, we won the same issue at the NLRB until it was thrown out by three Trump appointees to the board in Washington,” the local wrote in a press release. “We had feared that would happen, which is why we chose a two-pronged approach, a federal unfair labor practice AND a contract grievance that we took to arbitration.  As it turns out,  this strategy was sound, necessary and successful.”

Management’s failure to maintain employees’ health insurance benefits was one of the issues that gave rise to recent protests by the local, including a month-long byline strike, a staff vote of “no confidence” in the executive editor, and staff leafletting about disputes with management outside public events.

The local’s battle for labor rights earned it recognition from Pittsburgh’s City Paper for labor’s “people of the year.”

“Despite not having a raise for 14 years, months of newsroom chaos, staff turnover, and public rants from ownership, the stamina and dedication exuded by the Pittsburgh Post-Gazette staff and the members of its union, the Newspaper Guild of Pittsburgh, has been commendable,” the City Paper wrote. “Their union is negotiating for higher pay and better health care. But really, their fight is about preserving the quality reporting a city like Pittsburgh deserves; it’s a fight Pittsburgh should get behind.”

The other contentious issues persist, and the local is urging readers to support its Pulitzer-Prize winning journalism by expressing opposition to those management policies by emailing the Post-Gazette’s owners and top editor:

The arbitrator’s ruling in the health care case “shows in no uncertain terms that our position was right all along,” said Pittsburgh Local President Michael A. Fuoco. “If the company wasn’t paying millions for bad legal advice from a union-busting attorney – as evidenced by this ruling and a recent federal court ruling regarding the Teamsters – we would have had fair and equitable contracts long ago.”

He urged the Block family, which owns the paper, to negotiate in good faith. “The future of the Pittsburgh Post-Gazette is at stake and we want to save it,” he said.