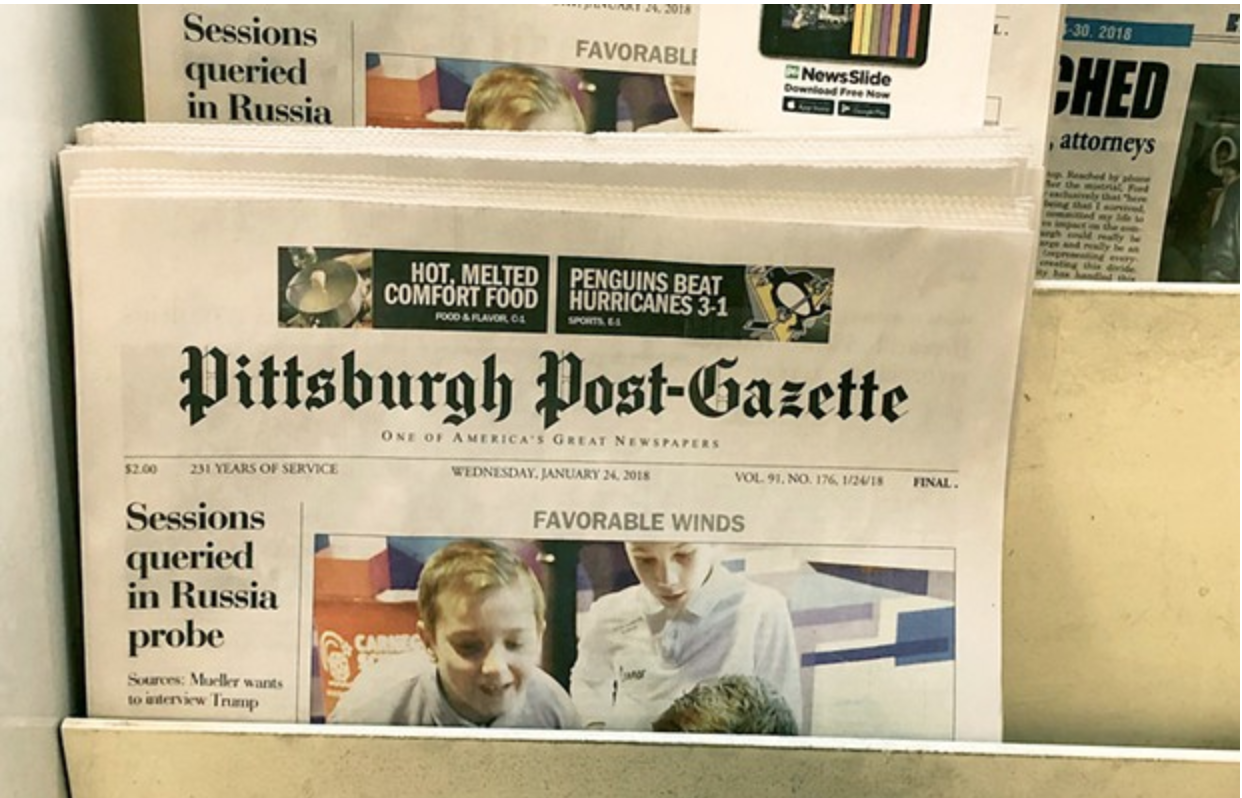 “All reporters, photographers, videographers, graphic artists, columnists and others are withholding their bylines from the paper, website and other PG platforms to express their displeasure with BCI,” he wrote on the union’s website. Those who toil behind the scenes, such as copy editors, page designers, web editors and others, are wearing stickers reading “I Support the Byline Strike,” he reported.

“In all, 99.9 percent of the union is participating in the protest, an astounding sign of solidarity,” Fuoco said.

The byline strike “underscores union members’ frustration with significant wage, benefit and staff cuts amid increased workloads for a dozen years,” he wrote. “And now, in negotiations for a new contract to replace one that expired March 31, 2017, the company incredibly is seeking even more concessions.

“To my knowledge, there has only been one other byline strike at the PG, in the early 1980s, so this is an extraordinary action that we don’t take lightly. But these are extraordinary times in which Guild members struggle to support themselves and their families in 2018 on 2006 wages and benefits,” Fuoco said.

“It’s our right to withhold our byline, our likeness and our initials,” Fuoco told The Incline. It’s a right covered in the contract — a right BCI is proposing to eliminate, he said.

“Guild members’ annual wages have been cut at least 10 percent for each of the past 12 years, which means they are earning 10 percent less than they did in 2006, the last time there was a raise,” Fuoco wrote on the union’s website. “Also during that time, pensions have been frozen, benefits have been cut, and health-care coverage has decreased.  Yet the cost of everything — including the Pittsburgh Post-Gazette — has increased dramatically.

“It is true that the Post-Gazette, like most newspapers in the country, loses money,” Fuoco acknowledged. “But its highly profitable parent company can to write off those losses and regularly earns more than $100 million in profits annually.  Still, over the last 10 months, in some of the most contentious contract talks at the paper in history, the company is demanding even more givebacks.  While the Guild typically keeps negotiations confidential, BCI’s refusal to move off its draconian proposal has forced us to go public,” he said.

Among the many lowlights in BCI’s proposal:

The Pittsburgh Local recently filed an Unfair Labor Practice charge against the company because, through its union-busting law firm King & Ballow of Nashville, Tenn., it refused to pay a 5 percent increase in the health care premium for 2018, thereby unilaterally cutting employees’ benefits. Companies involved in collective bargaining are required by federal law to maintain the same level of wages and benefits of expired contracts,” Fuoco said.

It is believed to be the first ULP the Guild has ever filed against the PG but given its disregard for the rule of law, there was no choice but to do so.

The situation is serious and volatile.  Unless the company comes to its senses and develops a sense of civic responsibility and economic justice for its loyal and talented employees, the very life of the 231-year-old PG is at risk.  We fear for our beloved newspaper as BCI ignores the $100 million a year all PG unions have given back to the company since 2006.

“We were hired to provide top-rate journalism talent and we’re performing our jobs in an exemplary fashion, regularly winning national, state and regional awards for journalistic excellence,” Fuoco said. “In fact, the PG was named the Pennsylvania Newspaper of the Year in 2017.  But while the company markets our plaudits, it refused to treat us as award-winning journalists.

“We will not–we cannot–approve another concessionary contract offered by a highly profitable parent company,” Fuoco added. “The byline strike is but one mobilization effort in our arsenal.  We are prepared to use others.  We hope and pray we don’t have to do so.”

The byline strike garnered coverage in other Pittsburgh-area publications, including the Pittsburgh City Paper, the Tribune Review and The Incline,