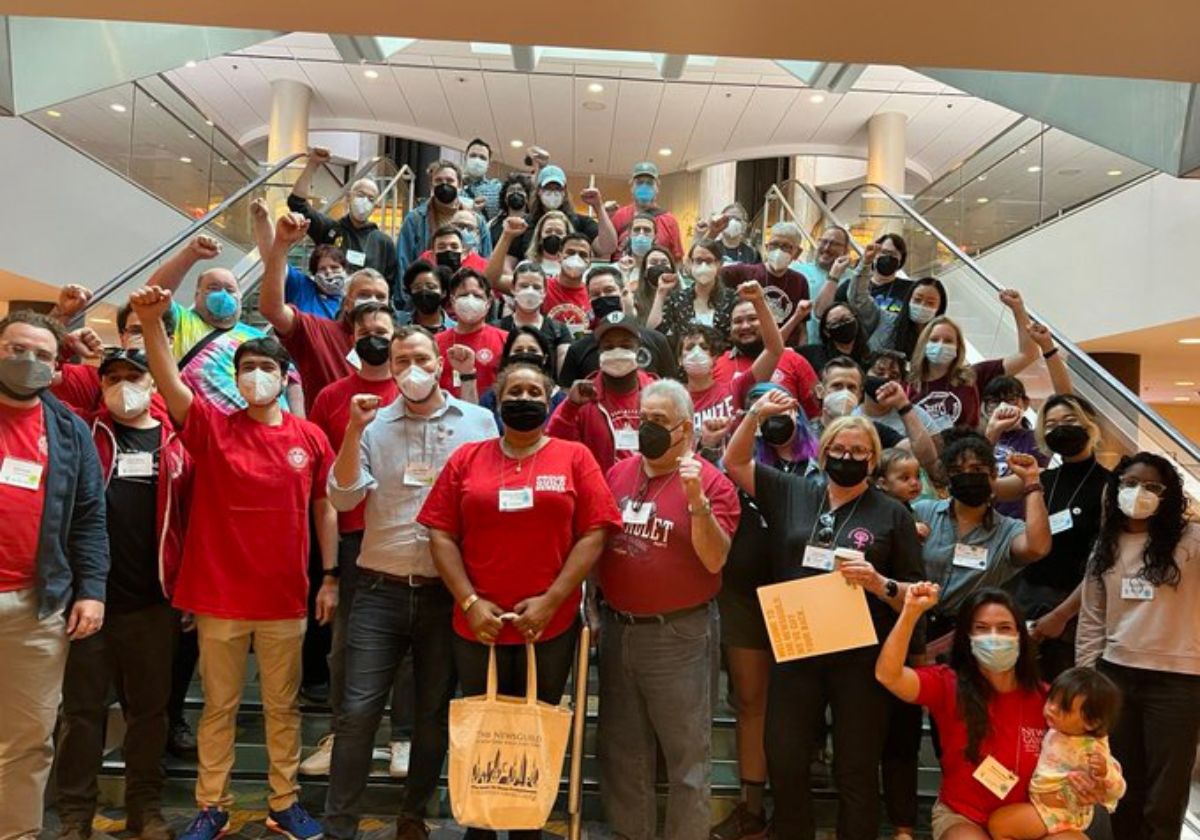 Access to abortion is a fundamental health care right and a matter of personal choice. And we’re going to fight for it by doing what we do best: organizing to protect our rights in the workplace.

NewsGuild members and staff have been meeting since May, when a draft of the decision overturning Roe v. Wade was leaked, to develop bargaining strategies to secure coverage for abortion care in our contracts. And we’ve been working to develop tools our members can use to organize their coworkers on this core labor issue.

Among the concerns about our diminishing rights, many journalists have expressed concern about their right to speak openly about access to abortion without being penalized by management for engaging on a so-called partisan issue. Some employers sent notices telling workers to refrain from tweeting about the decision.

But the National Labor Relations Act gives most workers the right to unionize and take collective action. That includes the right to speak publicly about our working conditions, such as comprehensive health care.

A working group has been meeting on alternate Tuesdays. The next meeting is tomorrow, June 28, at 5:30 pm ET. Email Hil O’Connell at hoconnell@cwa-union.org for a calendar invite, if you’d like to attend.

The Supreme Court’s ruling is a devastating blow to the right to privacy and the right of women and all people to control their own bodies and make decisions about their own health care. And it’s likely to be the first of many of our rights to be struck down, including the right to marry.

Working people need access to safe, affordable abortion care just as we need quality health care generally, parental leave, childcare, and all other policies that help us support our families. This is an issue that spans class, race and gender. And we should fight for it as such.

More than 100 NewsGuild members attended the Labor Notes conference near Chicago and we all walked away with a lot of energy. Guild members and staff led many of the panel discussions and got to connect with members of other unions. I was honored to give the final speech, closing out the conference. When Barbara Madeloni, education coordinator at Labor Notes, introduced me she mentioned the number of workers who have joined our union in the past five years: 7,486 across 160 workplaces. Barbara was interrupted as the entire audience got to their feet in celebration.

“Was that the Reckoning?” On June 15 we had a great discussion with Nikole Hannah-Jones, Susan DeCarava, Erin Logan and Desiree Stennett about the ingrained anti-Black racism and pervasive pay inequities in newsrooms. They affect news coverage and separate us from our communities. It was a great conversation that spilled over our plan to go into breakout rooms and collectively plan how we can push for substantive, permanent changes in our newsrooms. So, we’re planning a follow-up assembly soon. More details to come!

McClatchy’s hypocrisy is stunning. In early June, McClatchy’s CEO sent an email to staff proclaiming that, “Inclusion and diversity are priorities and imperatives at McClatchy.”

But that didn’t stop the company from using Juneteenth, which celebrates the emancipation of enslaved people, as a bargaining chip during contract talks. Last year, the company announced Juneteenth would be recognized as a company-wide paid holiday except at unionized newsrooms.

NewsGuild members at the Fort Worth Star-Telegram, Kansas City Star, and Miami Herald/el Nuevo Herald called out McClatchy for the hypocrisy. And members of the Fort Worth Guild packed a mid-June bargaining session and asked why the McClatchy was honoring Juneteenth as a company-wide paid holiday, except for unionized workers.

Management’s answer: “This is not a civil rights issue. This is a bargaining process issue.”

McClatchy’s bad-faith tactic is all too common. It’s a terrible thing for McClatchy to continue fighting the journalists who work hard to hold power to account and seek and report the truth. If McClatchy continues down this road, it’ll only continue to hurt the company.

Members of the Jersey Journal Guild have been fighting for a fair contract and taking their case to readers, community leaders and elected officials.

In response to their campaign, Jersey City Ward E Councilman James Solomon introduced a resolution endorsing their call for fair wages. “Local media is our bedrock to uncover corruption and educate Jersey City’s residents about their government,” the resolution says. “Our city’s journalists should be fairly compensated.”

The June 13 resolution notes that inflation has reached a 40-year high while wages have only increased by 4% over more than 10 years.

Guild members’ efforts generated tweets of support from leaders of civic groups, the mayor of Jersey City, the mayor of Hoboken, a council member and readers.

Please support them by signing their petition.

As part of our fight to save local news, last week we petitioned the FCC to reject the attempt by two titans of Wall Street to takeover TEGNA. TEGNA is a local news broadcaster that Standard General (a hedge fund) and Apollo Global Management (a private equity firm) have set their sights on. NABET (National Association of Broadcast Engineers and Technicians), which is also a sector of the CWA, joined us in the filing.

Wall Street has been killing local news, destroying jobs and raising prices for a while now. This is just the latest example.

We first raised questions about the proposed takeover in April, including whether it would further erode local journalism and eliminate more jobs. In May, we joined forces with Common Cause and Public Knowledge and asked the FCC to delay the acquisition and to require Standard and Apollo to provide more information about the proposed deal. The FCC requested more information from the firms and approved a one-month delay, which brought us to last week’s petition. In early June I called on President Biden to urge the FCC to reject the takeover.

In mid-June, Standard Media CEO Deb McDermott said the company has “no intention, and have never had the intention, of reducing news or news staff at TEGNA stations” in an email to employees.

The word “intention” is doing a lot of work in that email. Standard General isn’t making any commitment to preserve local news or jobs. Instead, in its own April 2020 presentation to the TEGNA board, Standard General said TEGNA was overstaffed compared to its corporate peers, with double the number of employees per station.

Members of the San Francisco Chronicle Guild fired off a barrage of tweets this month as part of their campaign for a new contract. They dedicated each day to one of their bargaining priorities, tweeting out members’ testimonials and statements from the unit as a whole.

They organized dozens of members to send letters urging Bill Nagel, publisher of the Hearst-owned publication, to join them at the bargaining table. And dozens more attended a bargaining session the following week.

Among other demands, they’re fighting for:

Further south, members of The Desert Sun NewsGuild staged a lunch out last week, to show Desert management and Gannett, which owns the publication, they’re serious about getting a contract – and soon! Looks like a great time, doesn’t it?

Members of the Media Guild of the West are urging California journalists to keep an eye on a bill that would prohibit employers from taking adverse action or threatening to take adverse action against any employee who refuses work because the employee feels unsafe. California SB 1044, sponsored by State Sen. María Elena Durazo, “would make it harder for newsroom bosses to fire or punish you if you decide that conditions become too dangerous to work in.”

Union leaders and management reps said the agreement will help make the Canadian media landscape a more equitable place for all.

Photo at top: The NewsGuild contingent at the Labor Notes conference.