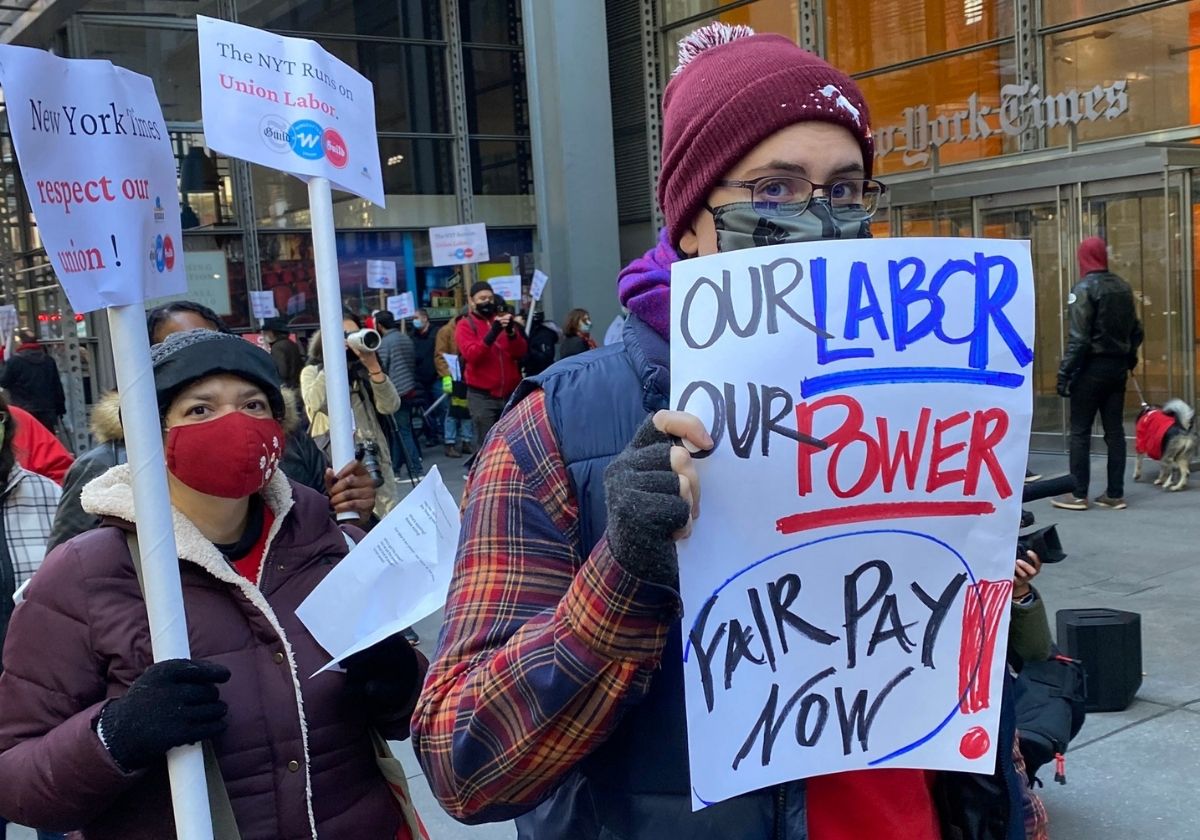 Last week I joined members and leaders in a rally in front of the New York Times. We came to deliver a message: Stop union busting and respect our union.

It was a brisk day, but I was thrilled to see so many NewsGuild of New York members from several different newsrooms show up in support! There were three groups of workers from the New York Times there fighting for respect: Wirecutter, the NYT Tech Guild and the NYT Guild.

In my remarks, I went back to the mission statement written by the Wirecutter workers when they formed in April 2019. They said, “We built this company by demanding the best instead of accepting the good.”

The workers got voluntary recognition from the company and were excited to make sure Wirecutter was the best place to work by getting a seat at the table. Two-and-a-half years later and the company continues to fight the workers and delay negotiations.

Sarah Kobos, a senior photo editor and Wirecutter leader, pointed out that the New York Times is sitting on about $1 billion in cash, but has offered workers raises of about 1%. That’s laughable when inflation is at its highest point in 30 years. Makes me wonder if Times management is doing their union-busting from a volcanic lair somewhere on Staten Island.

The workers are going to walk out on Black Friday and stay out through Cyber Monday. Please honor their “digital picket line” and don’t shop through Wirecutter unless a deal is reached before then. Follow them on Twitter for updates.

We know what they’re doing though: Times management doesn’t want other unionized workers to win anything while they continue to union-bust and prevent NYT Tech workers from unionizing.

Kathy Zhang, a Times Tech Guild organizing committee member, reported that “Management has fought us every step of the way.” Tech Guild members announced their union campaign in April with strong majority support and asked management to recognize their union. Instead, management brought in expensive union-busting lawyers who are running the meter.

The Times Tech Guild includes engineers, analysts, designers, project managers, product managers, and assistants who work on the Times’ websites and mobile applications. When they win union recognition, they will be the largest union of tech workers with bargaining rights in the country.

Bill Baker, chair of the 1,300-member New York Times Guild that represents journalists, business employees and others, said, “Everywhere I look the Times is fighting workers at this company.” The collective bargaining agreement between the Times and the NY Times Guild expired in March but they’re still fighting for better wages and respect.

The “Build Back Better” reconciliation plan passed the U.S. House on Friday and included the key provision we’ve supported in the Local Journalism Sustainability Act: A tax credit that will save the jobs of local news journalists.

I want to thank House leadership and the 14 Republican co-sponsors of the LJSA. This measure is truly bipartisan even though the House passed BBB with only Democratic votes. The tax credit would be available for any legit employer of local journalists. It’ll be one of the largest public investments in journalism in U.S. history.

This legislation will support local journalism jobs in all kinds of newsrooms across the U.S. And I expect it to boost hiring across the country.

The legislation is now in the Senate, and I expect action before the end of the year. Everyone across the Guild knows this is an essential moment to safeguard our democracy. Check and see if your senators are cosponsors and let them know how important the Local Journalism Sustainability Act is.

The staffers of POLITICO and E&E News won voluntary recognition of their union just 10 days after they announced they were unionizing. Employers always have the ability to recognize workers when they unionize and it’s much better than to fight workers. The journalists joined WBNG and added another 250 members to our ranks.

Tanya Snyder, a Politico transportation reporter, said she believed management saw that union organizers had the support of an overwhelming majority of the newsroom “and they were not prepared to fight that.”

With union recognition nailed down, Organizing Committee members immediately began informing coworkers about the new rights recognition brings. The workers now have “status quo” protection, which means management must negotiate with workers before changing anything.

PEN Guild members are now outlining the democratic template they’re building as they put together their contract proposals and educate their colleagues about their new rights.

More than 2,100 workers have joined the Guild so far this year from 42 different workplaces. That’s sort of unbelievable and clearly smashes all previous records. Our union has grown by more than 32% in just four years, an unprecedented rate!

The NLRB upheld the New York Guild’s contention last week that management has an obligation to bargain with the union over return-to-office plans and vaccine mandates.

The New York Guild filed an unfair labor practice charge in September in response to unilateral moves by the Meredith Corporation (which owns People, PeopleTV, Entertainment Weekly, Shape and Martha Stewart Living) to force employees back to their offices.

Union leaders also organized members in numerous shops against “reckless and unlawful return-to-office mandates,” packing bargaining sessions and sharing heart-wrenching stories about the personal losses and stress workers have experienced during the pandemic. In August, a large majority of Meredith employees signed an open letter demanding that the company delay a mandatory return-to-office date indefinitely and engage in bargaining over return-to-office as part of a complete contract.

“Our position since the start of the pandemic has been unequivocal: employers must prioritize the health and safety of their employees and the community over hazy conceptions of workplace culture or their misgivings about empty, leased office space,” the local said.

Journalists at Tribune Publishing launched a “work to rule” campaign, announcing that they wouldn’t work for free to cover the massive losses of reporting capacity caused by the company’s buyouts and slow hiring rates. “That means just eight hours, full breaks and NO unpaid overtime,” workers said on Twitter.

Too many companies take advantage of our generosity without paying us for our time making edits in the evening or taking calls from sources on the weekends. Journalists work so hard that it’s just disgusting to take advantage of them, while also paying them so little.

Staffers at Warehouse Workers for Justice announced last week that they are forming a union as part of the Chicago Local 34071 of The NewsGuild-CWA.

“We’re the newest union in Chicago/Joliet! We’re pumped and proud of our members for working together to get to this point,” members of the newly minted group wrote.

They’re meeting with management of the workers center to work out a voluntary recognition agreement for the Warehouse Workers for Justice Union.

CWA Canada was instrumental in getting journalist Raihan Tamanna, her daughter Barana, 7, and son Barad, 8, out of Taliban-controlled Afghanistan last month. CWA Canada President Martin O’Hanlon met with the family in Toronto last month, bearing gifts of clothing and other presents, courtesy of CWA Canada members.

Oh my god, if you haven’t already seen it yet be sure to check out this recent edition of Last Week Tonight with John Oliver. It’s a hilarious take-down of company anti-union campaigns that many Guild members will recognize. Warning, it has a good bit of salty language.