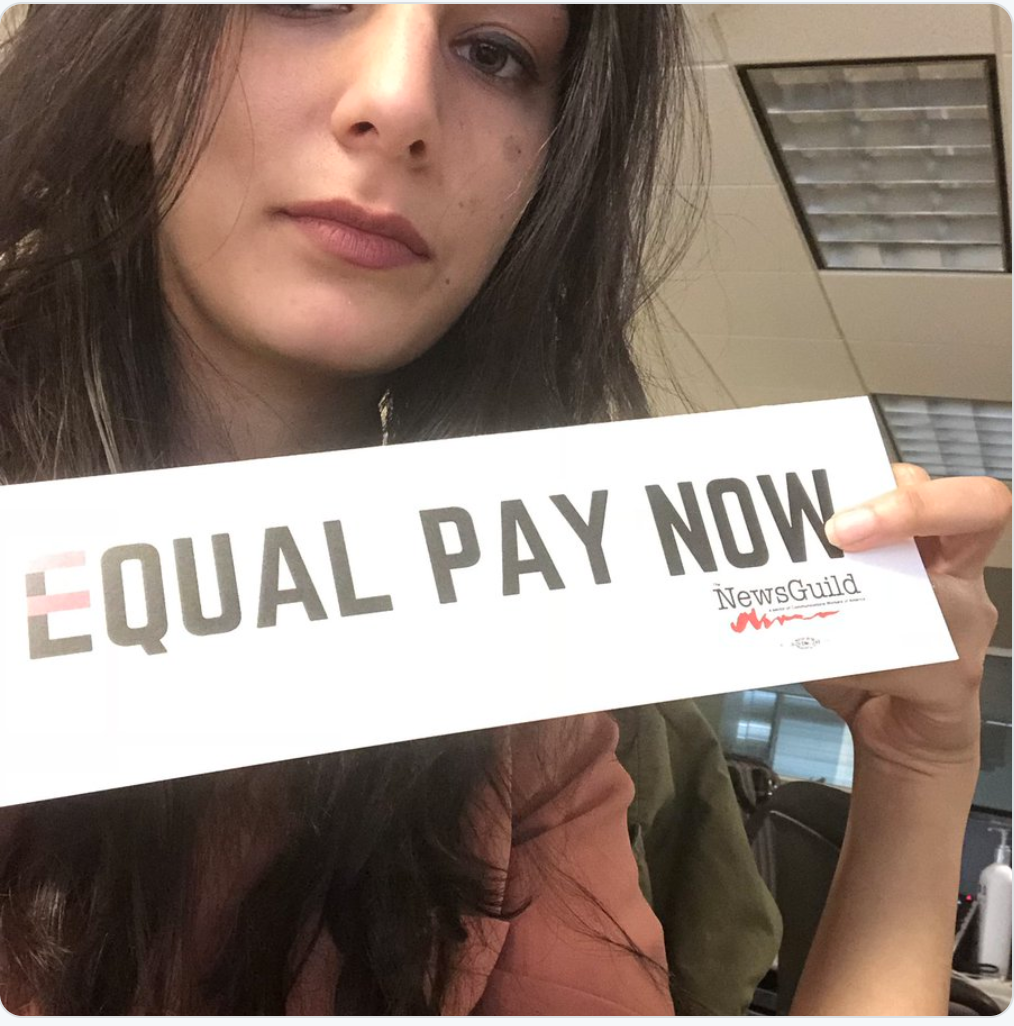 April 3, 2019 – Members of The NewsGuild-CWA called out the nation’s media executives on April 2, demanding equal pay for women and people of color. Designated “Equal Pay Day,” the date symbolized the fact that women must work well into 2019 to catch up to what men earned in 2018. For women of color it will take longer to catch up – much longer.

NewsGuild members tweeted up a storm, displayed signs at their work stations, distributed brochures, and extolled the value of unions in documenting and fighting disparities in pay.

Mallika Sen (pictured above) a member the News Media Guild local who worked at the Associated Press, tweeted, “I start a new job tomorrow, and as a woman of colour, I’m proud to belong to a union that fights for the same pay for the same experience.”

The Chicago Tribune Guild unit tweeted, “If your newsroom isn’t organized yet, you should know that a union can help address those pay inequities.”

Members of the Tidewater Media Guild baked cookies in two sizes in honor of the day – offering bigger cookies to women at the Virginian-Pilot and Daily Press who, they said, needed the extra dough more than the men.

Determined to break the taboo about discussing wages, several union members in the local wore “Hello My Name Is” stickers inviting coworkers to ask them how much they earn. Other stickers encouraged workers to “#HaveTheConversation.”

Kristina Bui, of the Los Angeles Times Guild, also addressed the taboo, tweeting, “People are willing to talk about a lot: politics, religion, sex and dating. But conversations about money are tough. Money is personal. Money is painful.”

The National Association of Black Journalists tweeted, “Today, #NABJ is partnering with the @news_guild to bring awareness to #EqualPayDay. NABJ member @MLBURNEY is among the women in media fighting for equality after personally experiencing pay differences between herself & male counterparts despite her skillsets & longevity.”

Today, #NABJ is partnering with the @news_guild to bring awareness to #EqualPayDay. NABJ member @MLBURNEY is among the women in media fighting for equality after personally experiencing pay differences between herself & male counterparts despite her skillsets & longevity. pic.twitter.com/eKDI7bM1cX

Carolina Miranda simply wrote, “November,” a reference to when Latinas’ earnings are expected to catch up to men’s earnings last year.

Madi Alexander of Washington-Baltimore Local tweeted that the results of a just-completed report on pay at Bloomberg BNA were “cringeworthy.”

Sarah Kaplan tweeted about the results of a 2016 study of pay at the Washington Post, pointing out that women made 83 cents for every dollar earned by men.

In addition to the signs and brochures, the national union posted a 25-second silent video that explained the issue in stark terms and created a website, NewsGuildEqualPay, to mark the occasion.

The next important date in the fight for equal pay is Aug. 22, 2019, when black women will catch up to men’s earnings for 2018. Who’s ready to start planning?