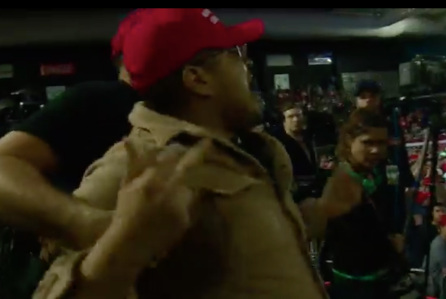 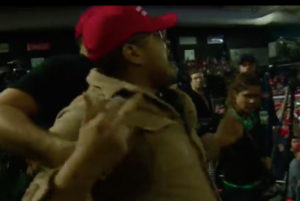 Feb. 12, 2019 – Once again, we at The NewsGuild-CWA and NABET find ourselves decrying violence at a rally held by President Trump and at which he lied about the media in order to incite the crowd. We have run out of words to describe the depravity and danger of his verbal attacks on journalists.

The BBC said cameraman Ron Skeans was “violently pushed and shoved by a member of the crowd” while covering the campaign rally Monday night in El Paso. A BBC spokeswoman told The Washington Post that security removed the man and that Skeans is fine.

Spokeswoman Charlotte Morgan said Trump could see the incident and checked with the BBC to make sure “all was OK.”

Trump would not need to check on the safety of journalists if he didn’t use his words to rile his supporters.

USA Today reported that Trump said early in his speech that he was popular “despite the fact that the media refuses to acknowledge what we’ve done and how well we’re doing it.”

The crowd then booed. “I guess 93 percent of the stories are negative. No matter what we do they figure out a way to make it bad,” he said to an angrier round of boos.

The NewsGuild-CWA, NABET and the Communications Workers of America are on record as supporting federal legislation called the Journalist Protection Act that makes it a felony to assault journalists.

Rep. Eric Swalwell of California said Tuesday that he plans to reintroduce the bill with Sen. Richard Blumenthal of Connecticut.

“This is what happens when a President calls a free press the “enemy of the people” and whips his rallies into a frenzy. Assaults must not be tolerated …” Swalwell said on Twitter.

The NewsGuild represents more than 20,000 workers, mostly at media organizations, while NABET represents about 10,000. Some 700,000 workers in the private and public sectors are represented by the CWA.