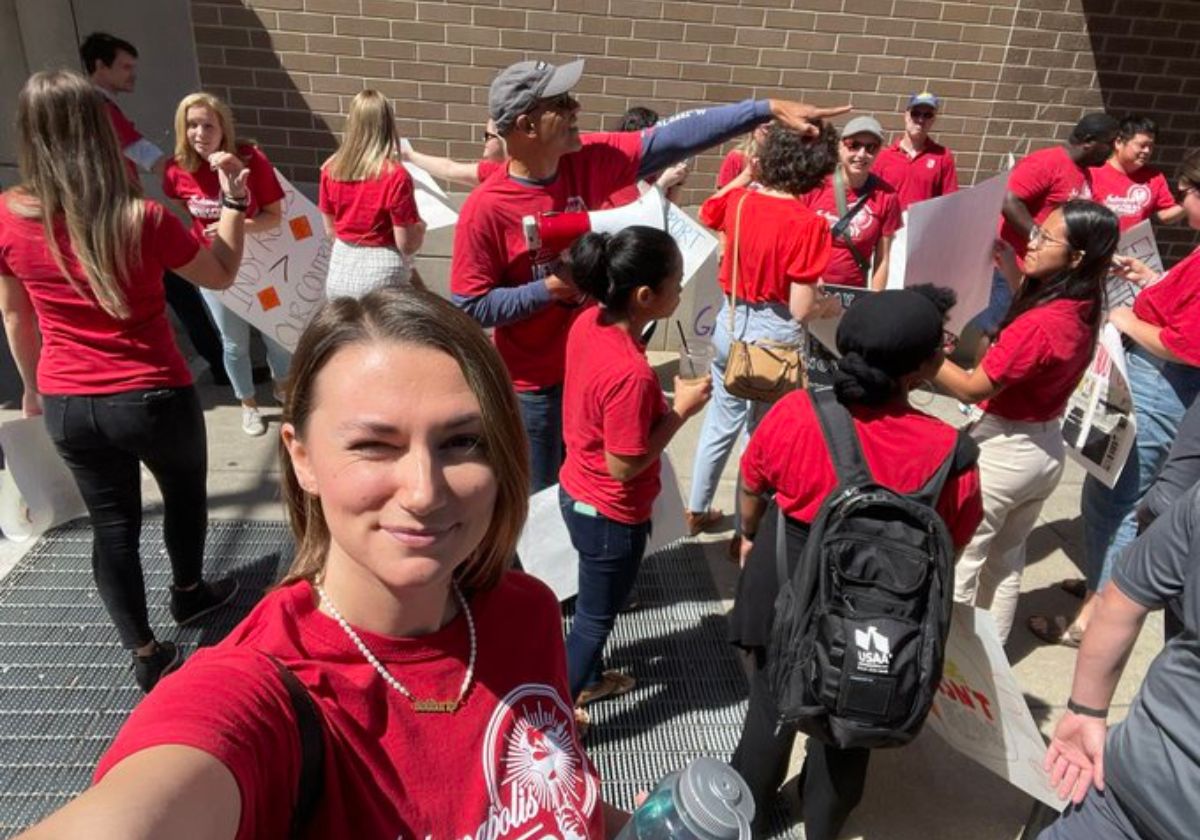 This is a lightly edited version of a post that appeared on the website of the Indianapolis NewsGuild on Sept. 1, 2022.

More than 30 red-T-shirt-clad IndyStar journalists and a dozen allies took a coordinated lunch break to demand a fair contract on Sept. 1, exactly two years after the expiration date of their collective bargaining agreement. (The agreement remains in effect until a new contract is negotiated.)

The journalists marched around Monument Circle in downtown Indianapolis, chanting, “Chop from the top, not the newsroom.”

The protest took place one day after Gannett executives finally revealed that more than 400 employees were laid off in a recent round of cuts. An additional 400 open positions were cut, including some at IndyStar. Management had avoided disclosing the numbers for weeks.

The union is fighting for a contract that rectifies pay inequity in the newsroom, brings decade-old pay scales up to date, and provides cost-of-living adjustments at a time of record high inflation.

Protecting local journalism that reflects the diversity of the city the Guild reports on is also vital, and matches the pledges workers have heard from company leaders on issues of equity and diversity.

The union is demanding that the contract ensures accountability from managers to consider journalists from diverse backgrounds when hiring and to conduct a pay study to ensure pay is equitable.

“This contract foolishness has gone on so long that it’s forcing us to ramp up our visibility. There will be more to come,” said Robert Scheer, a photojournalist who has been at IndyStar for 24 years. “It’s funny that when a stock price goes up, employees generally don’t benefit but when it goes down, we’re always the ones who suffer – not top leadership.”

Many IndyStar journalists took a 10% pay cut during the 2009 recession and have never recovered. Union member and long-time IndyStar Olympics sports insider David Woods said that for him to have the same purchasing power he had in 2006, he would need a $28,000 to $30,000 pay raise. He has worked at IndyStar since 1994.

Enough is enough, @Gannett. We took our contract fight to Monument Circle today on the two-year anniversary of our contract expiring.

“While we’re fighting to improve our own work lives, this is bigger than us. We believe our contract proposals would help make the Indianapolis Star the best newspaper it can be, which is what our city deserves,” said Jenna Watson, president of the local and photojournalist at IndyStar since 2016.  “We must keep strengthening the Star this way, from the bottom up, if we want to save local journalism.”

Layoffs and high turnover were another big concern of the IndyStar newsroom, which has seen many journalists leave in recent years due, in part, to low pay.

“We can’t let pay scales and benefits languish indefinitely if we want robust local journalism in Indianapolis. We’ve seen too many talented colleagues leave for other outlets or other careers,” said investigative reporter Tony Cook. “We do this work to inform our neighbors and to bring positive change in our city. Gannett needs to commit the resources needed to ensure great journalism can thrive in Indianapolis.”