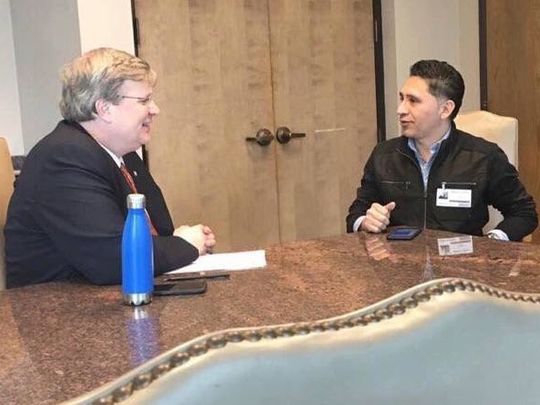 And although the charges were dropped in court proceedings two days later, he now faces deportation. That’s because Immigration and Customs Enforcement (ICE) agents were waiting in court to take him into custody.

Duran, a 42-year-old Salvadoran immigrant, was conducting a live internet broadcast of the protest when he was arrested outside the Memphis Criminal Justice Center.

Duran is a well-respected journalist in the Spanish-speaking community in and around Memphis. According to the Tennessean, he began his career in Memphis is 2008 on La Voz 1240 radio, where he co-anchored a morning radio show and was a newscaster on “Minuto 60.” He was news director and co-anchor of Ambiente 1030 radio until 2017.

ICE spokesman Bryan D. Cox told the Commercial Appeal that Duran has been at risk for deportation since 2007, when he failed to make a scheduled court date.

“Freedom of the press is a sacred right, enshrined in our nation’s Constitution,” Guild President Bernie Lunzer wrote in a letter to Sheriff Oldham before the charges were dropped. “Mr. Duran should not have been detained, arrested or threatened with deportation simply for doing his job – informing the people.”

After the arrest, more than 120 organizations and local businesses signed a letter urging the sheriff to release Duran and more than 1,000 people sent emails or made phone calls, according to a press statement issued by coalition of immigrant rights organizations.

“Unfortunately, Manuel’s arrest is not unique. It is part of a growing national pattern of ICE targeting people perceived to be political opponents. Every American of good conscience should be deeply alarmed at this attack on fundamental rights,” Gabriela Benitez of the Detention Watch Network, said in a statement.

Employees Decry the State of Journalism at Tribune Publishing; Call on Shareholders to Reject Alden’s Nominees to Board of Directors

Statement by Bernie Lunzer on May 8, 2018, Alden Protests