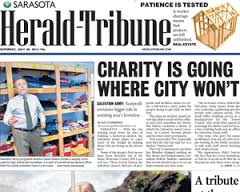 (June 7, 2017) There are consequences for companies – like the Sarasota Herald-Tribune – that retaliate against employees who vote to form a union.

That’s the significance of the decision by Region 12 of the National Labor Relations Board (NLRB) to file a formal complaint against the Florida paper, says Tim Schick, administrative director of the NewsGuild-CWA.

The complaint alleges that representatives of the Herald-Tribune illegally:

Elizabeth Johnson, a union supporter who was removed from the paper’s I-Team investigative unit and reassigned to less-desirable general assignment reporting, said she was glad management was being held accountable for their actions.

“For me it goes back to why we formed the union. We just wanted to have a voice at the table when decisions affecting us were being made,” she said. (Johnson left the paper for another job prior to the issuance of the complaint.)

“I hope the Herald-Tribune management learns from this experience, so that other reporters and other newsroom staff don’t have to endure the work environment that I and some of the others experienced.”

Unfortunately, the Herald-Tribune’s actions are not unusual. “Employers are willing to engage in illegal activity if they think it will defeat the union,” Schick said. “But workers have a recourse and the opportunity for remedies if they hang tough and stand up for their rights.”

“The journalists at the Herald-Tribune are fighting for the right to practice their profession with the dignity of decent pay and benefits – and without the threat of retaliation,” said NewsGuild-CWA President Bernie Lunzer. “The union will always support them in that fight.”

A hearing on the complaint is scheduled for Aug. 21.