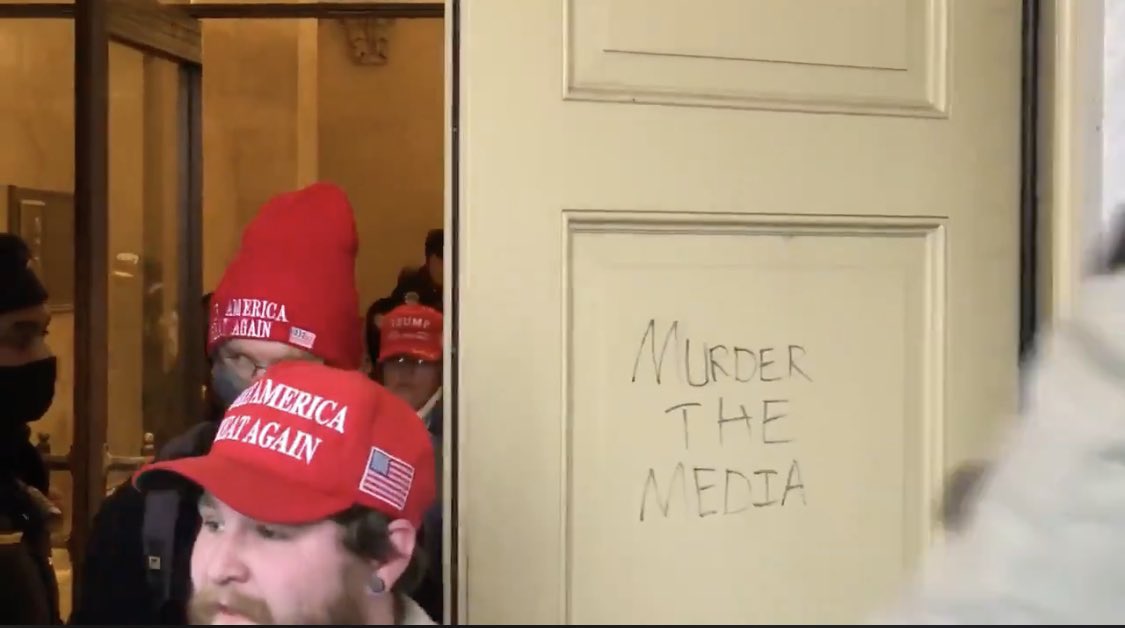 Yesterday’s insurrection at the U.S. Capitol was a threat to our democracy and an assault on our country’s press freedoms.

While a violent mob roamed the Capitol, reporters continued doing their jobs, despite knowing that they were likely targets of the attackers since silencing the free press has long been a strategy for fascists. Police temporarily abandoned several floors where reporters were located, putting them at even greater risk.

This shameful assault is the direct result of the rhetoric spewed by politicians incapable of accepting the truth, or cynically relying on falsehoods to inflame division for political gain. The president and lawmakers who spread these lies have blood on their hands.

Outside the Capitol, an angry and violent mob attacked camera crews and reporters, stealing and damaging equipment. Although few rioters were arrested, in the evening police briefly detained journalists as they worked to cover the mayhem, despite the fact that journalists were clearly exempted from the D.C. curfew.

Thankfully it appears that no journalists were severely injured yesterday.

“Yesterday was an absolute embarrassment for the U.S.” said NewsGuild-CWA President Jon Schleuss. “It’s the role of the free press in a democracy to report, give context and inform the public, especially during times of chaos.

“The world witnessed the assault on our democracy thanks to the courageous work of journalists who put themselves in harm’s way to report the news. I saw what the rest of the world saw—a deluded mob invading our house of democracy in an attempt to subvert an election,” Schleuss added.

“Physical assaults or attacks of any type against journalists, reporters, camera crews, and technicians are despicable, offensive, and unlawful. These incidents should be fully investigated, and offenders should be prosecuted with maximum impact,” said NABET-CWA President Charles Braico.

Union leaders said immediate action must be taken to stabilize and support the core base of our democracy: a free press informing the electorate.

Media literacy should be required in our schools

Yesterday’s mob acted on lies spread by politicians and operatives intent on spreading misinformation. It’s clear that our nation needs to prioritize media literacy in our education system. Too many people accept lies and conspiracy theories as fact. Media literacy education would provide our children with the skills necessary to understand the intent behind messages: understanding bias, determining fact from fiction and looking for alternative sources of information. Media literacy is essential if we intend to confront extremism, radicalization and racism in our country.

The chaos and discord we are seeing is in part due to the erosion of local news across our nation. There are more than 40,000 fewer journalists working in America today than there were a decade ago, which has left a vacuum that increasingly is filled with conspiracy theories and partisan propaganda. The pandemic has sped up the loss of journalists across our country, with more than 11,000 journalists losing their jobs just in the first half of 2020. Greedy corporations, media consolidation and the gutting of newsrooms by financial players has robbed our nation of local truth tellers. Our founding fathers prioritized the free flow of information so voters would be informed participants in democracy. Hedge funds and greedy private equity have been robbing us of our democracy. They need to be rooted out of our industry and we must invest in more local news jobs: through the work of local do-gooders, foundations and public support. As it did in the founding days of our nation, public policy must support a free and robust press.

Police must stop interfering with reporters

This summer dozens of reporters were targeted, assaulted and arrested by police all across the United States: after the murder of George Floyd in Minnesota, the protests in Los Angeles and in Washington, D.C. Police must be held accountable and prosecuted for interfering with the First Amendment rights of reporters gathering and disseminating the news.

NewsGuild of New York statement on violence toward journalists

Washington-Baltimore News Guild Statement on Violence at the US Capitol